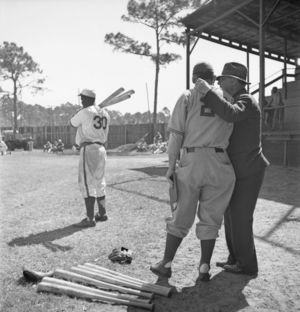 The Montreal Royals, also known as les Royaux de Montréal in French, played in the International League's fore-runner, the Eastern League, from 1897 to 1902, then were bought by Ned Hanlon and moved to Baltimore. The Worcester franchise was moved to Montreal in mid-1903 and played in the EL until 1911 (known as the Montreal Canucks in 1906 only) and the International League from 1912 to 1917. The Royals returned to the IL from 1928 to 1960. In between they were part of the Eastern Canada League in 1922 and 1923, which became the Quebec-Ontario-Vermont League in 1924. In 1922, the team briefly featured one of the few African-American players to appear in Organized Baseball between 1890 and 1945, P/SS Charlie Culver.

They played their home games at Montreal Stadium (better known as Delorimier Stadium). The Royals won the pennant in 1935, and in 1939 they were bought by the Brooklyn Dodgers, who made them their top minor league club. Between 1941 and 1958, the Royals made the playoffs 16 times and won 7 league titles. In 1946, Jackie Robinson spent a season with the Royals, breaking the minor leagues' color barrier on his way to breaking the major league color barrier. Don Drysdale, Don Newcombe, Roy Campanella and Duke Snider are among the other Dodger greats to wear a Royals uniform, as did Roberto Clemente before being plucked away by the Pittsburgh Pirates in the 1954 Rule V Draft. Tom Lasorda also pitched for the Royals for much of the 1950s. When the Dodgers dropped from three AAA clubs to two, they decided to drop out of the International League and on September 7, 1960, the Montreal Royals played their last game. 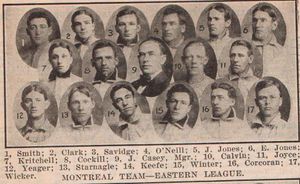 This page is in need of some additional content. Please help the Bullpen by expanding it, or learn how to contribute.
Retrieved from "https://www.baseball-reference.com/bpv/index.php?title=Montreal_Royals&oldid=1197689"
Categories:
Hidden category: