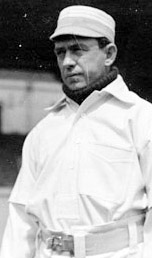 James "Doc" Casey was a regular from the time he hit the majors, in September 1898, until his last season in 1907. He played third base for 10 seasons, receiving nearly 5,000 plate appearances while hitting .258.

Casey was born in Lawrence, MA and playing pro ball in the New England League by 1892. He also attended college during 1893 and 1894 and spent much of 1895-1898 playing ball for Toronto. He became the first Maryland Terrapin to reach the big leagues, debuting September 14, 1898 with the Washington Senators. He played 28 games, usurping Jud Smith's starting role down the stretch. Manager Arthur Irwin traded him to the Brooklyn Superbas in April 1899. Casey, in his first season at 29, became the regular third baseman for Ned Hanlon's squad who went 101-47 to win the pennant.

In 1900, Doc played only one game for Brooklyn, jumping instead to the new American League Detroit team (the League was a minor league just this one year). He stayed with the team and the league from 1901-1902 as the loop became a major league. He jumped back to the National League, playing for the Chicago Cubs from 1903-1905 in the days immediately prior to their greatest stretch (four pennants from 1906-1910). As it was, Casey's Chicago teams finished at least third each season. Now 35, the Cubs traded him in December 1905, along with some other regulars, in order to get Jimmy Sheckard, who would prove valuable to the Cubs in their succeeding years. Harry Steinfeldt took over third base in 1906, having been acquired even before Casey was traded. Doc found himself back with Brooklyn, and finished his major league career as their regular third baseman in 1906-1907.

In 1908 and 1909, Casey went back to Canada, this time to become player-manager for Montreal. In 1911, he was player-manager for Fort Wayne. Casey had prepared for his post-baseball days by studying pharmacy and, after baseball, ran a drug store. He died on New Year's Eve 1936 in Detroit.