". . .he was a bigger cog in the old invincible Cub machine than he ever received credit for being." - Johnny Evers

Jimmy Sheckard was a star early in the 20th century who might have made it into the Hall of Fame had he been more consistent.

Standing 5' 9", he broke in with the Brooklyn Bridegrooms in 1897. He played well that year and in 1898, showing some power, and in 1899 he spent a year with the Baltimore Orioles - their last season before being contracted out of the league - before returning to Brooklyn in 1900, 1901, and most of 1902 before joining the new American League Baltimore team for 4 games at the end of 1902. Then, he was back to Brooklyn for another three years. 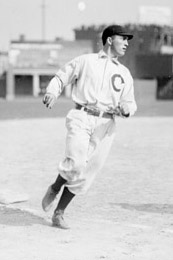 His 1901 season was notable, as he hit .354 with substantial power and drove in 104 runs. He led the National League in slugging percentage. He also hit grand slams on consecutive days, an amazing feat, especially in the Deadball Era. It would be 77 years until another National Leaguer, Phil Garner, matched the accomplishment. In 1903, he hit .332, again with good power.

Sheckard joined the Chicago Cubs from 1906 to 1912, which was their greatest era. They won the World Series in 1908, and won the pennants in 1906 (when they went 116-36), 1907, and 1910. Sheckard, however, was not able to play as well for them as he had earlier in the decade. While he was still an above-average player, other Cubs players were the big contributors. His best year with the Cubs was 1911, a year in which the Cubs did not win the pennant, when Sheckard led the league in runs scored, partly because he had 147 walks. That was a National League record until Eddie Stanky drew 148 walks for the 1945 Brooklyn Dodgers, but his total is likely understated as there are at least five games in which his daily record (from which official statistics are compiled) appears to be missing a plate appearance, which was almost certainly a walk.

He finished out his career in 1913, split between St. Louis and Cincinnati.

He played in approximately 2,100 games and had around 2,100 hits. His lifetime .274 batting average was hurt by playing in the Deadball Era for most of his career. His substantial number of walks gave him an impressive on-base percentage of .375.

By the similarity scores method, the most similar player is his National League contemporary Tommy Leach.

He died after being hit by a car.