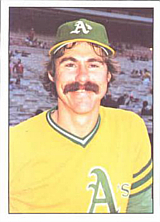 Phil Garner played 18 years in professional baseball, 16 in the majors, before retiring. He coached for three years and managed for over a decade at the big league level. Although Clint Courtney (Browns/Senators) was baseball's original "Scrap Iron", Garner was given the nickname and carried it throughout his career.

Garner grew up in Rutledge, TN, the son and grandson of Baptist ministers. To play baseball in high school, he enrolled in a school in Knoxville, TN. In college, he was a two-time all-Southeastern Conference team selection and an honorable mention All-American in 1970. He also received a Bachelor of Science Degree in General Business while at the University of Tennessee.

When the 1970 amateur draft selections for Tennessee were listed, Garner's name was not on the list. He said "I have never been hurt so badly in my life... I just wanted to be alone." He went to the university ballpark and sat there all night, trying to figure out why he had not been selected. Then the next day, he found out he had been picked in the 8th round by the Montréal Expos. As his parents had moved to Houston, TX, he was listed under the Texas draft eligibles and Tennessee newspapers had not caught it. Garner said "If you could get the emotional bends from coming up too fast, I would've been a very sick person."

The Expos scout sent to sign Garner kept downplaying his abilities and did not even offer him a contract, only a plane ticket to a minor league team. He was upset about not getting offered any money and by the lack of interest shown and did not agree to join the Expos. He went to play semipro baseball in Liberal, KS. Expos scout Pat Patterson came to check out Garner at that point and asked him how much money he wanted. Phil asked for $30,000 and Patterson said Garner needed to show power to earn it. That evening, Garner hit a long three-run homer off Burt Hooton to win the game with Patterson in attendance. The next day, Garner hit another three-run homer, but Pat was not there and Phil never heard again from Montréal.

Garner continued to play semipro baseball and in the January 1971 amateur draft was the third overall selection by the Oakland Athletics. The A's showed more interest and he subsequently signed. Garner planned to make the majors in five years, even though Sal Bando manned third for Oakland.

As Bando was still holding down the A's hot corner, Garner had little hope to join the team. When he got his contract for 1974 for $600 a month (the same as in 1973) from Charlie Finley, he did not sign. As he had been a business major, he felt that he could negotiate his own terms in this era when few players had agents. Finley did not want to negotiate and told Garner to stay in Houston and sell insurance as the club had no use for him. Finley did send Garner a contract calling for a raise to $700 a month but Phil refused to sign it. He still reported to Tucson, and got a break in late May when Bando went down with a bruised calf for a few games.

Called up to Oakland, Garner was placed in the starting lineup by Dick Williams. Phil still refused to sign a deal and Finley told him he could go back to Houston; Garner later wrote "I had been in and out of the starting lineup in approximately twenty minutes." Reggie Jackson intervened and advocated for Garner, who then worked out a raise to $750 per month (thanks to Jackson). Finley asked Garner not to hold his business style against him, and Phil said he loved Finley as an owner. Phil went 0 for 8 with a walk filling in for Bando and returned to Tucson. Overall, he hit .330/~.412/.541 with the Toros and again was in double figures in doubles (29), triples (10) and homers (11). He split PCL All-Star honors at third with Bill McNulty, who had hit .329 with 55 homers, 135 runs and 135 RBI in a home run haven. Garner was promoted back to Oakland by late July, but saw scant action, primarily as a defensive replacement. He went 5 for 20 in the last couple of months of the season.

In March of 1977, Garner was traded, with Chris Batton and Tommy Helms, to the Pittsburgh Pirates for Dave Giusti, Doc Medich, Doug Bair, Rick Langford, Tony Armas Sr. and Mitchell Page. Phil became a hit in Pittsburgh, where his blue-collar, gritty style won approval from the city's fans. Thirty years later, he was still generally recalled in glowing terms by baseball fans in the region.

Phil says he never worried about getting into a brawl when he was with Pittsburgh, thanks to huge teammates like Willie Stargell, Dave Parker, John Candelaria and Bruce Kison. In his first spring training game with Pittsburgh, Garner made three errors and hit a triple. When the snowbirds attending the game booed the errors but did not respond to his sliding into third for the triple, Phil walked to the stands and yelled "[W]hat's the problem here?", which got the fans cheering.

Garner initially disliked Pittsburgh, which was still heavily polluted from the steel industry and lacked straight streets due to the multitude of hills throughout the city. Garner and his wife Carol bought a house there and as they got to know the region, "we fell in love with Pittsburgh." He says that he and his wife did not want to leave town after he eventually was traded by Pittsburgh. Garner hit .260/.325/.441 for the 1977 Pirates with 99 runs, 35 doubles, 10 triples, 17 homers, 77 RBI and 32 steals in 41 tries. He set career highs in home runs, doubles and runs that year. He tied Greg Luzinski for 9th in the 1977 NL in runs scored, tied Luzinski and Ken Griffey Sr. for 10th in doubles, tied five players for fifth in triples and tied Gary Carter for 8th in extra-base hits.

In 1978, Garner split his time evenly between second base and third base (81 games at each spot) and hit .261/.345/.400 to remain around the league average on offense. He tied 5 players for 4th in the 1978 NL with 9 triples, tied for 10th with 12 intentional walks and tied for fourth by hitting into 18 double plays. He stole 27 bases, but was caught 14 times. Garner had a huge accomplishment that September. On September 14, with Bill Robinson and Ed Ott aboard, John Milner was intentionally walked by Bob Forsch to get to Garner, who took him deep to center for a grand slam in the 7th inning. Phil's wife rarely missed a home game but had not been there and got mad - "How could you hit the only grand slam of your career the one night I don't come to the game?" Garner told her he would hit one the next day. On September 15, Omar Moreno, Robinson and Willie Stargell were on base in the first inning, when Garner homered off of Woodie Fryman. It was the first time in 77 years, since Jimmy Sheckard, that a National Leaguer had hit grand slams in consecutive games; Brooks Robinson had done it in the AL in 1962.

Phil had a .293/.359/.441 batting line for the 1979 Pirates and stole 17 bases in 25 tries in another well-rounded offensive campaign. He again split his time almost evenly between second and third. He was 6th in the 1979 NL with 15 intentional walks as he often batted 8th (he also hit 2nd, 6th or 7th regularly). He hit .417/.462/.833 in the 1979 NLCS. In Game 1 of the 1979 World Series, the Orioles loaded the bases in the first with one out and John Lowenstein hit a routine grounder to second. Garner says he "moved over and picked it up, then calmly threw the ball about fifteen feet over second base", letting two runs score. He wound up setting a World Series record for second basemen with 7 double plays to overcome his early miscue. He had at least one hit in each Series game and batted an impressive .500/.571/.667 in what would be his only World Series action as a player.

Garner batted .259/.315/.358 for the 1980 Pirates as the starting second baseman and stole 32 bases while only getting caught 7 times. It had been the worst offensive season of the past five, yet it marked his second All-Star selection, and his first in the National League. Despite fading further in 1981, he would make his third and final All-Star team that year. Phil was hitting .254/.327/.326 for the 1981 Pirates when Pittsburgh dealt him to Houston for Johnny Ray and two players to be named later.

Overall, Garner hit .260/.323/.389 in 1,860 major league games. He had a 99 OPS+ and stole 225 bases in 330 tries, making him a league-average offensive player despite manning positions in the middle and lower ends of the defensive spectrum. 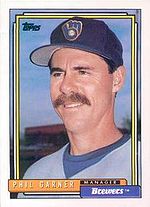 After his playing career ended, he was a Houston Astros coach from 1989 to 1991. In 1992, he became Milwaukee Brewers skipper and has since managed the Detroit Tigers (2000-2002) and Astros, whom he led to the World Series for the first time in 2005. He was fired by the Astros on August 27, 2007, along with general manager Tim Purpura, with the team in 5th place. In all three stops during his managerial career, Garner started strong, only to see his teams fall into mediocrity shortly thereafter. In Detroit and Houston, he was fired after a season or less of listless play, but in Milwaukee, he managed the team for seven consecutive losing seasons from 1993 to 1999 before getting the axe.

The Fall of the Roman Umpire by Ron Luciano, 1972-1975 and 1989 Baseball Guides, main part of the B-R site. BaseballLibrary.com was used to find out who had last hit grand slams in consecutive games before Garner