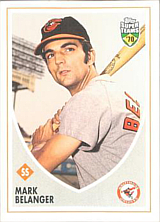 "When I first managed Mark at Bluefield in the Rookie League, I could see he was a natural. At 18, there wasn't much anyone could teach him about playing shortstop. If anything, he was too smooth." - Billy Hunter

Slick-fielding shortstop Mark Belanger won eight Gold Gloves during his eighteen-year big league career, spent almost exclusively with the Baltimore Orioles. Despite hitting just .228 with 20 home runs in his career, he was an integral part of the Orioles' glory years in the late 1960s and early 1970s.

After attending Pittsfield High School, Belanger was signed by the Orioles and scout Joe Cusick in 1962 for a $35,000 bonus. He made his pro debut that summer but missed the entire next season due to military service. He came back in 1964 and played 381 games in the minors over the next three seasons, earning cups of coffee in the majors with Baltimore in 1965 and 1966. He was in the big leagues for good in 1967, backing up shortstop Luis Aparicio and second baseman Davey Johnson. That year, on April 30th, he entered a game against the Detroit Tigers in the 9th inning, replacing Woodie Held at second base. Baltimore pitchers Steve Barber and Stu Miller had combined to hold Detroit hitless over 8 2/3 innings, but Belanger dropped a throw from Aparicio, allowing the winning Tiger run to score on an error. The game was the first no-hit loss in major league history.

Belanger replaced Aparicio as the Orioles' starting shortstop in 1968, in what many fans thought at the time was a major step down. Although he could not match Aparicio's bat, he more than made up for it with his fielding. He went on to have his finest year at the plate in 1969, posting career bests in average (.287), RBI (50), and runs scored (76), while winning his first Gold Glove. Baltimore won the AL East title, and Belanger showed rare power by hitting a home run in Game 1 of the ALCS versus the Minnesota Twins. He later scored the winning run in that game, and added two more runs in Game 3 as the O's swept the series. Baltimore went on to fall to the New York Mets in the World Series. Belanger's average fell to .218 in 1970, but his bat warmed up in that year's postseason. He went 4-for-12 with 5 runs scored in the ALCS sweep of the Twins. Despite going just 1-for-14 in the first four games of the World Series, manager Earl Weaver batted him leadoff in Game 5, and he drove in the game-tying run as Baltimore beat the Cincinnati Reds to capture the Series.

Belanger failed to hit a home run in 1971 but won his second Gold Glove; the team returned to the World Series for the third straight year but lost in seven games to the Pittsburgh Pirates. After hitting just .186 in 1972, he again went homerless the next summer. That year, he began a streak of six straight Gold Glove seasons. In 1976, he hit .270 with a career-high 27 stolen bases and played in the All-Star Game for the only time in his career. By 1979, he was a platoon player, splitting time at shortstop with Kiko Garcia. The Orioles reached the World Series again, falling to the Pirates in seven, but Belanger struggled at the plate in the postseason, going 1-for-11. He ended his career with one season with the Los Angeles Dodgers in 1982.

Although his legacy will be his outstanding glove, Belanger excelled against certain pitchers, in particular Nolan Ryan and Ron Guidry. After his retirement, Belanger was involved with the Major League Baseball Players Association, first as a union representative, and later as an assistant to Donald Fehr. A heavy smoker, he died of lung cancer at age 54.