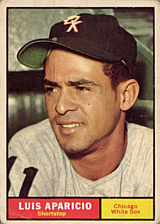 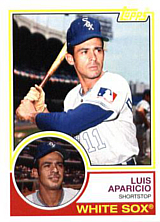 Hall of Fame shortstop Luis Aparicio was a ten-time All-Star and nine-time Gold Glove winner during an 18 season major league career. Along with Maury Wills, he is credited with bringing the stolen base back in vogue in the 1950s and 1960s.

The son of the great Venezuelan shortstop Luís Aparicio Sr. and nephew of Ernesto Aparicio, "Little Louie" made his professional baseball debut with Gavilanes in the Zulian League, owned by his father and uncle. He made the Venezuelan national team for the 1953 Amateur World Series but played left field and third base as Román Vilchez held down short; he hit .350 with 6 runs and 7 RBI for the Silver Medal winners. He was 7th in the event in average, between Darío Rubinstein and J. Matos. His father had played for the national team just two years prior. On November 18, 1953, in one of the most memorable moments in Venezuelan baseball history, his father announced his retirement and gave his glove to his son, who was playing his first game in his hometown of Maracaibo.

Aparicio was signed by Frank Lane, the Chicago White Sox general manager, on the recommendation of the team's Venezuelan shortstop Chico Carrasquel for a $5,000 signing bonus and $5,000 salary before the 1954 season. In his first season, he hit .282 with 4 home runs and 47 RBI in 94 games for the Waterloo White Hawks in the Three-I League (B). Promoted to the Memphis Chickasaws of the Southern Association (AA) the following year, he played well with a line of .273-6-51 in 150 games with 48 steals, more than the next two players in the SA combined.

In the 1955 offseason, Carrasquel, the White Sox starting shortstop for the previous five years, was traded to the Cleveland Indians to make room for Aparicio. Apparently, the Sox had offered the Indians either Carrasquel or Aparacio, but Cleveland did not want to pay a $10,000 bonus as part of a deal for Aparicio, who made his debut on Opening Day 1956 as the Sox starting shortstop. He won the league's Rookie of the Year Award, the first non-American to win the honor, with a .266/.311/.341 line. He also led the American League in stolen bases with 21, beginning a streak of nine consecutive seasons (1956-1964) leading the circuit in the category; he still holds the major league record for most consecutive seasons leading the league in stolen bases.

In 1959, Aparicio was a key player on the American League champion "Go-Go" White Sox. He placed second in AL MVP voting to double play partner Nellie Fox. Aparicio and Fox formed one of the best double play combos in history, and the pair was close off the field as well, with Aparicio naming his son after Fox. In 1963, the White Sox traded him to the Baltimore Orioles. He set a record that year for fielding percentage by a shortstop with .983. He won a World Series title with the Orioles. Aparicio formed, with Jerry Adair (second base) and Brooks Robinson (third base), one of the top defensive infields of the decade. He enjoyed two of his finest seasons with them; in 1964 at the age of thirty he hit .266/.324/.363 and in 1966, at 32, he hit .276/.311/.366. 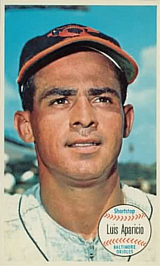 Aparicio was traded back to the White Sox after the 1967 season and had his best offensive season in 1970, hitting .313/.372/.404. On September 25, 1970, he broke former White Sox Luke Appling's record of games played at shortstop with his 2,219th game. On December 1, 1970 Aparicio was traded to the Boston Red Sox. In 1972, Aparicio fell down rounding third base in the next-to-last game of the season, costing the Red Sox a chance at victory. His slip caused the Sox to miss the playoffs by half a game, since they ended up playing one less game than the AL East Champion Detroit Tigers. Commissioner Bowie Kuhn had ruled that no games canceled due to the April strike would be made up, and this left the Sox a half game out with an 85-70 record when the season was over. Aparicio retired at the end of the 1973 season.

In the Venezuelan League, Aparicio played for Gavilanes, Rapiños, the Tiburones de La Guaira and the Águilas del Zulia. In 13 seasons in the league, he hit .247 in 419 games with 370 hits in 1,500 at bats, 211 runs scored, 63 triples and 135 stolen bases. He also managed Zulia, La Guaira, the Cardenales de Lara, the Navegantes del Magallanes and the Petroleros de Cabimas.

Aparicio was elected to the Baseball Hall of Fame on January 10, 1984 by the Baseball Writers Association of America. He would also gain entrance into the Baltimore Orioles Hall of Fame and his number 11 was retired by the Chicago White Sox. When Omar Vizquel signed with Chicago in 2010, Aparicio allowed the club to bring the number back in use so that Vizquel, a Venezuelan like Aparicio, could wear it.

"I watched Luis Aparicio play in Caracas from the time he was a young boy. His father was one of the greatest shortstops to play in Venezuela. He was called 'Luis El Grande.' As Luis got older and played professional ball I saw that he had the talent to play in the Major Leagues. I was responsible for the White Sox signing him. In 1954 I called Frank Lane from Caracas and told him about Aparicio. Lane said I should bring him to the States. He was assigned to Waterloo, in Class A, and then Memphis. In 1956 he was ready to play in the big leagues. So I got traded to Cleveland to make room for him. I was happy to help him. And he was always grateful and told sportswriters about me. When I was in Cleveland I talked to him almost every day. On my first trip back to Chicago, Luis was waiting for me. He told me, 'I want to go home.' 'Why?' 'Because Income Tax took all my money.' 'Speak to the White Sox. I know they're going to help you.' 'No, no, no. I want to go home tomorrow.' 'Luis, you can't go home. You've proved to everybody that you can play in the big leagues. And it's because of you I now play in Cleveland. So you better stay here.' That's when Aparicio started to collect his salary without being taxed. The White Sox paid his tax in order to keep him in America."

- Chico Carrasquel in We Played the Game

"What is the top requirement for a second baseman? A fine shortstop. I am fortunate in having the greatest shortstop in baseball, Luis Aparicio."

"That little guy is just about the greatest shortstop I've ever seen. I can't imagine how anybody could possibly be any better, no matter how far back you go."

"He's the best I've ever seen. He makes plays which I know can't possibly be made, yet he makes them almost every day."