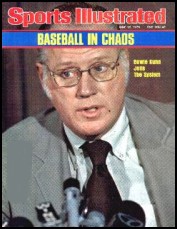 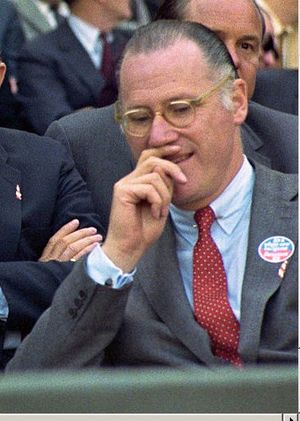 Kuhn at the opening game of the 1969 Washington Senators season.

Bowie Kuhn was the Commissioner of Major League Baseball for three terms from 1969 to 1984. A lawyer by trade, Kuhn oversaw the introduction of free agency, the addition of six clubs via expansion, and World Series games played at night.

A descendant (and namesake) of famous frontiersman Jim Bowie, Kuhn attended Princeton University and the law school at the University of Virginia before going to work at the law firm that represented the National League. As a result he became familiar with the business of baseball, and when the job of Commissioner became vacant following the ouster of William Eckert, he got the position in 1969. His major work had been in defending Major League Baseball in the suit filed by the city of Milwaukee, WI following the relocation of the Atlanta Braves after the 1965 season. John McHale was the favorite to succeed Eckert, but he had just accepted the position of President of the newly-created Montreal Expos and declined. He did throw his influential support behind Kuhn, though, ensuring his election. 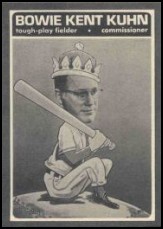 He oversaw the game during a time of great labor conflict, including strikes in 1972, 1976 and 1981. He also intervened a number of times in the affairs of teams, using the fact that his mandate called him to act in the "best interests of the game" as justification. Most famously, he intervened in 1976 by preventing Oakland Athletics owner Charles Finley from selling off three of his star players (Rollie Fingers, Joe Rudi and Vida Blue) who were threatening to leave as free agents at the end of the season; he then voided Finley's trade of Blue to the Cincinnati Reds because the amount of money involved was too large, whereas the Reds were only giving up untested minor leaguer Dave Revering for the All-Star pitcher. He mediated the owners' decision to play a split season in 1981. He was the named defendant in the Flood v. Kuhn suit which was decided by the Supreme Court of the United States in 1973 and temporarily upheld the reserve clause. However, baseball's age-hold reserve system was upended only two years later, by arbitrator Peter Seitz's decision in the case of pitchers Andy Messersmith and Dave McNally which opened the doors for widespread free agency.

In a highly controversial and unpopular move in 1983, Kuhn banned Willie Mays and Mickey Mantle from associating with Major League Baseball because they were employed by casinos in the late 1970s. The ban was lifted in 1985 by his successor, Peter Ueberroth.

In 1999, The Sporting News named Kuhn the 60th most powerful person in sports in the 20th century.