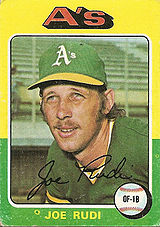 Rudi was signed as a free agent in 1964 and came to the majors with the Kansas City Athletics in 1967. He stayed with the A's for ten years, becoming a regular in 1971. His best season with the bat was probably 1972, when he hit .305 with 19 home runs (in a year when the American League as a whole hit only .239 and slugged .343). He led the league in hits and triples. In 1974, another good year for Rudi, he led the AL in doubles, total bases and extra base hits. On June 15, 1976, with the Boston Red Sox in Oakland to play the A's, Rudi and Rollie Fingers were sold to the Red Sox for $1 million dollars each. On June 18th, Commissioner Bowie Kuhn voided the sale, citing the "best interests of baseball".

He became a free agent after the 1976 season and signed with the California Angels. He helped the Angels win a division title in 1979, although his batting average went down each year from 1974 to 1981. He finished his career playing for the Boston Red Sox in 1981 and back with the Athletics in 1982.

The similarity scores method shows the most similar player (through 2012) as Kevin McReynolds, although McReynolds never won a Gold Glove.

He homered 13 times off of these Hall of Famers: Dennis Eckersley, Rollie Fingers, Jim Palmer, Gaylord Perry and Nolan Ryan.