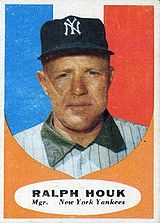 Ralph Houk is best remembered as a pennant-winning manager of the New York Yankees. Additionally, he played several seasons for the club, was their General Manager, and managed two other big league teams.

A catcher, Houk signed with the Yankees prior to the 1939 season. Following three years in the minors, he enlisted in the U.S. Army on February 22, 1942 at Fort Leavenworth, Kansas. During World War II, he fought in the Battle of the Bulge and earned a Silver Star and Purple Heart, seeing combat under the command of General George S. Patton. On one occasion, he took a bullet through the helmet but was not seriously wounded. He left the Army with the rank of major.

After the war, Houk returned to baseball in 1946 and reached the majors in 1947 as the team's third-string backstop behind Aaron Robinson and Yogi Berra. He hit .272 in a career-best 41 big league games that summer and got a hit in Game 6 of that fall's World Series. He split the next two seasons between the Yankees and the Kansas City Blues of the American Association, and then spent the next five years with New York, seeing very limited playing time behind Berra and Charlie Silvera. Nevertheless, he was on the Yankees' World Series roster four times during his career.

Following his major league playing days, Houk returned to the minors in 1955 as skipper of the Denver Bears. He spent three seasons managing the team, winning an American Association title in his final year. He then went on to spend three years on the Yankees' coaching staff before succeeding Casey Stengel at the helm of the club from 1961 to 1963. He took the team to the World Series all three years and won the Fall Classic twice. He was then named the team's General Manager and promoted Berra to his former post. After the team got off to a slow start under skipper Johnny Keane in 1966, he stepped down as GM to manage the club again. After the team was sold to a group including George Steinbrenner in 1973, he resigned his post.

Houk went on to manage the Detroit Tigers from 1974 to 1978, only once finishing above .500. Houk was later criticized for his over-use of rookie pitcher Mark Fidrych, whom Houk let pitch complete game after complete game, often on only three days' rest. Fidrych won the Rookie of the Year Award in 1976, but - possibly due to Houk's constant and consistent over-use of his arm - tore his rotator cuff in an early 1977 appearance, effectively ending a very promising career at the age of 22.

Houk was skipper of the Boston Red Sox from 1981 to 1984, when he retired. Despite his success in the first three years of his managerial career, he never returned to the postseason again.