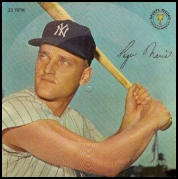 "As a ballplayer, I would be delighted to do it again. As an individual, I doubt if I could possibly go through it again." - Roger Maris, about his 61-home-run season

Roger Maris will forever be famous for breaking baseball's then most prestigious record, besting Babe Ruth's iconic 60 home run 1927 campaign with a legendary 61 in 1961. He remains the player with the highest single-season total for home runs among those never suspected or accused of using steroids.

Born Roger Maras in then small-town Hibbing, MN, he grew up in Fargo, ND. Always sensitive, he changed his name while in the minor leagues over fans' tendency to call him "Mare-Ass". This inborn shyness and thin skin made it impossible to later handle the publicity, pressure, and criticism hitting 61 home runs in a season stirred in media-crazy New York City.

While Maris was playing for the Tulsa Oilers in 1955, manager Dutch Meyer kicked him off the team. Maris was hitting .233 at the time. However, that was not typical of his minor league apprenticeship: he was a top-ranked prospect, labelled by almost everyone who saw him play as "can't miss". In four years in the Cleveland Indians farm system, he led teams in Keokuk, Reading, Fargo-Moorhead and Indianapolis to the playoffs from 1953 to 1956, the latter two to league championships. Going into spring training in 1957, he was written up as one of baseball's top rookie outfielders, combining speed, power, a high batting average and excellent defense.

Maris impressed manager Kerby Farrell in spring training and broke into the major leagues with the Indians in 1957 where he hit .233 in 116 games. However, those statistics are misleading: on Opening Day, April 16th, he went 3 for 5 off Billy Pierce of the Chicago White Sox then hit the first home run of his career two days later off Jack Crimian of the Detroit Tigers on his way to hitting safely in his first nine games. Things began to go sour when he broke two ribs trying to break up a double play on May 10th against the Kansas City Athletics; he was hitting .315 at the time, but slipped to .258 by June 1st. He then went on the disabled list in late June after fouling a pitch off his right instep. He was still hitting .271 as of July 17th when he went into a slump that lasted until the end of the season, leaving him with unimpressive numbers overall. After the season, both General Manager Hank Greenberg and Farrell were fired, and their replacements, Frank Lane and Bobby Bragan, had no particular stock invested in the young outfielder.

Maris began the 1958 season hitting well, batting .280 with 3 home runs when he pulled a muscle in his lower back in early May. Bragan thought that Maris was exaggerating his pain and labelled him a malingerer, after which Maris only played sporadically. He did not help his case by being well-known as a brooder who would silently rehash all that was going wrong. By June 15th, he was hitting .225 with 9 home runs and 27 RBI when he was included in one of Lane's innumerable trades, being packaged with infielder Preston Ward and pitcher Dick Tomanek to the Kansas City Athletics in return for infielder Vic Power and utility man Woodie Held.

Even at the time, the trade was speculated as but a way-stop on the road to the New York Yankees: on June 18th, Eugene Fitzgerald wrote in the Fargo Forum that "It is no secret that the Yankees would like to have Maris. His transfer to Kansas City may delay his arrival at Yankee Stadium. Whether the charges are true or not that Kansas City is a [major-league] farm club for the Yankees, it must be recognized that Maris has a better chance now to join the Yankees than he had while in the employ of the Cleveland club". Fitzgerald's words would prove prophetic: Maris played just a season and a half for Kansas City, batting .247 with 19 home runs in 99 games over the remainder of the 1958 season and hit a solid .273 with 21 doubles, 16 home runs and 72 RBI in 122 in 1959.

Now ready for the big stage, Maris was traded to the Yankees on December 11, 1959, along with Joe DeMaestri and Kent Hadley for veterans Don Larsen and Hank Bauer and unproven youngsters Norm Siebern and Marv Throneberry. It was a trade typical of a time when the Yankees sent grab bags of washed-up veterans and promising youngsters in need of playing time to Kansas City in return for emerging talent with the potential to blossom into full-fledged stars in pinstripes.

When Maris joined the Yankees he had a handful of highlights on his resume, finishing 7th in the American League in runs and home runs in 1958 and being named as the A's representative to the second All-Star Game played in 1959. He had patrolled the Cleveland outfield alongside AL home run leader Rocky Colavito, who was one year older than him, for one and half years. In Kansas City he'd shared it with Bob Cerv, a slugger who later spent parts of 1960, 1961, and 1962 as a Yankee teammate.

Already a proven power hitter - he'd finished just one homer behind AL champ Mantle in 1960 - Maris set a course for the ages in 1961. And so did Mantle, the two roommates becoming locked in a season-long battle over the historic single-season record of 60 set by Babe Ruth in 1927. So iconic was the number that then Commissioner of Baseball, Ford C. Frick, an old friend of the Babe, decreed that the home run record had to be set in the same 154 games or fewer Ruth had had to play in, not the 162 expansion had stretched the American League season to. With everyone on the edge of their seats, Maris finally clubbed #61 on the last day of the season, arcing a shot into the right field seats at Yankee Stadium off Tracy Stallard of the Boston Red Sox. The famous asterisk was placed, pleasing some fans but not others. Even so, it was not long before Maris became widely regarded as the sport's all-time single season home run champ and the asterisk faded on its own. So great was the achievement for its era it was not until bandbox parks, diluted pitching, a shrunken strike zone, and steroids conspired against it almost four decades later that it fell. 13 of his homers were hit against the Chicago White Sox that season, one shy of the all-time mark set by Lou Gehrig against the Cleveland Indians in 1936; Maris' total would not be matched until another Yankee, Gleyber Torres, hit 13 homers against the Baltimore Orioles in 2019.

The treatment of Maris by the New York press in 1961 did much to thin his hair and smudge his image as a player. While they obsessed on the record, he focused on winning. Being a private person was also not a good mix in a media capital like New York. Yet, he was considered a great teammate by his fellows, and a good family man to boot. He was blessed with a superlative arm and played the tricky right field corner at original Yankee Stadium as well as anyone. He was as good a clutch hitter as the Yankees ever had, and with Mantle represented a one-two punch that rivaled even the 1927 Murderer's Row of Ruth and Lou Gehrig. The 1961 team hit 240 homers, a record which also stood for decades until the same combination of parks, arms, strike zones, PEDs, and maple bats goosed home run totals in baseball's second Lively Ball era.

In 2010, researchers from SABR uncovered two errors in the 1961 statistical record that affected Maris's standing among league leaders that season, one dropping him into an AL tie, the other raising him above one. A single extra RBI had been credited to him on a run that had scored on an error, tying him at 141 for the AL lead with Jim Gentile, while a run originally credited to Mantle was found to have been scored by Bill Skowron, giving Maris the unilateral league lead.

In Maris' seven years with the Yankees the team went to five World Series and won two. While not as famous as Bobby Richardson's game-saving snare of Willie McCovey scorching game-ending liner, Maris' 9th-inning throw from right field to hold Matty Alou at third in Game 7 of the 1962 World Series against the San Francisco Giants "saved" the game for Richardson's heroics and helped secure World Series rings for the Yankees.

The Yankees began to age badly in 1965, seemingly at once. Maris sustained a wrist injury. For two seasons he insisted it was real, the Yankees contended it was not. These were the penny-pinching pre-George Steinbrenner CBS-owned Yankees, willing to endure both contention and losing, not do anything to win. The injury sapped Maris' power and rendered him an average hitter with only occasional pop. With so great a fall from his heights and acrimony with the team medical staff souring his already problematic public image, Maris began to be portrayed as both lazy and a malcontent by the press. Knowing it wasn't true hurt Maris deeply, but just as in 1961 he was unable to show a sympathetic side to the fans. His days in New York clearly grew numbered.

In a salary dump, the badly faltering Yankees traded Maris after the 1966 season to the St. Louis Cardinals for Charley Smith, a journeyman third baseman. Though Maris played only two final years in St. Louis, he helped the Cardinals to back-to-back World Series, the first a stirring seven-game 1967 win over the Boston Red Sox and the second another full-length showdown against the powerful 30-game winning Denny McLain-led Detroit Tigers in 1968.

Many players from the 1967 Cardinal team have insisted over the years that Maris' presence on that squad brought an awareness of winning and dedication to hard work that helped elevate them from talented pennant contenders to World Champions.

Maris was terrific in the 1967 Series, swatting at a .385 clip behind speedy Lou Brock and Curt Flood and ahead of booming Orlando Cepeda. A last Fall Classic in 1968 against the Tigers paled in comparison, the soon-to-retire Maris going just 3 for 19 (.158) with a double and one RBI as the Cards' heroic run played out.

Earlier in 1968, "The Year of the Pitcher", Maris drove in the only run in back-to-back 1-0 victories. It would be 42 years until another National Leaguer matched the feat (Jimmy Rollins).

Maris opened up a beer distributorship in Gainesville, FL after his retirement. He was diagnosed with lymphatic cancer in 1983 and had his uniform number retired by the Yankees the following year. Maris died from cancer at age 51 at M.D. Anderson Hospital in Houston, TX on December 14, 1985 and was buried in Fargo.

Roger Maris was a solid player who helped his team win by doing the little things right and being a team player. While his numbers are not good enough for the Hall of Fame, his 61 homers stand as one of the greatest seasons by a power hitter in the history of baseball. 100 of his career total 275 home runs were hit in just two years of his career, 1960 and 1961. Roger's career was often beset with injuries.

According to similarity scores one of the most similar players to Maris is Eric Davis. The parallel is interesting, as while few fans would come up with Davis as a match for Maris, both had fine skills and talent but were dogged by injuries during the primes of their careers.