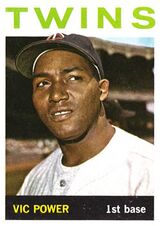 Vic Power played twelve years in the big leagues, almost all in the American League. In addition to a career major league batting average of .284 and 126 home runs, he also won seven Gold Gloves - and might have won more but the award was only started partway through his career. In 1955, he was second in the American League in batting.

One of the flashiest, best fielding, and most colorful first sackers in history, Power once stole home twice in one game. He was a free swinger who seldom walked or struck out, finishing his career with an OBP of just .315. During his time in the United States (major league and minor leagues), he was known as "Vic Power."

Once, while going into a restaurant in Syracuse, NY in 1951, Power was told, "I'm sorry, we don't serve colored people here." "That's OK," he unflappably replied, "I don't eat colored people. I just want rice and beans". At other times, Power has claimed the incident took place in Little Rock, AR.

He once got out of a jam on the basepaths by running directly towards the fielder running with the ball, while waving his arms in the air. He flustered him enough that he threw the ball to someone else instead of tagging Power.

The 18-year-old Power played in Canada's Provincial League in 1949. That is where he got the name "Power"; his real last name, Pellot sounds like a dirty word in Québécois French, and he began to be called by his second last name "Pove", which is pronounced "Po-way"; this led to his being called Victor or Vic Power, and the name stuck with him in North America. He became extremely popular in Quebec as the star player for the Drummondville Cubs.

In 1952, he led the Provincial League in batting and then went to Syracuse to play in the New York Yankees organization in 1951. The scout was Tom Greenwade. The year after that he was with the minor league Kansas City Blues team. In 1953, he led the American Association in batting. He was traded to the Philadelphia Athletics after that season; dating a white girl reportedly earned him a quick exit from the Yankees' organization, although it should be noted that the very conservative Yankees had not yet integrated, and were not ready to do so, but could not justify keeping a player of Power's talent in the minor leagues indefinitely. The Yankees fielded their first black player, Elston Howard, the next season, 1955.

Power managed the Puerto Rican national team to a Silver Medal in the 1973 FIBA Amateur World Series. He scouted for the California Angels in Puerto Rico.