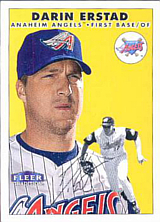 A former football player at the University of Nebraska, Darin Erstad is one of at least four NCAA Division I-A punters to play Major League Baseball. Andy Tracy, Chris Jelic and Vince Coleman are among the others. Erstad was a member of the Cornhuskers 1994 national championship squad.

He had a tremendous season as the leadoff hitter for the Anaheim Angels in 2000. He hit .355 in 157 games, with 39 doubles and 25 homers, 240 hits, 121 runs scored and 100 RBI. That last figure was the major league record for a leadoff hitter until topped by Charlie Blackmon in 2017. He was also a member of the Angels World Championship team in 2002, making the last out of Game 7 in center field.

Erstad spent 2011 as a volunteer assistant coach at his alma mater, then was named head coach for 2012. He stepped down after the 2019 season, with a record of 267-193-1 and a Big Ten conference championship in 2017. In 2015, he was one of three finalists for manager of the Los Angeles Dodgers, a job that eventually went to Dave Roberts; the other finalist was Gabe Kapler.