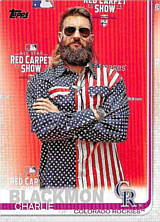 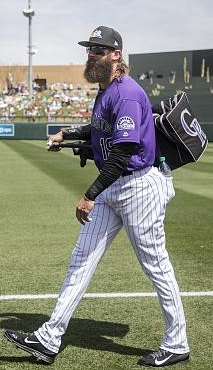 Charlie Blackmon was drafted out of high school by the Florida Marlins in the 28th round of the 2004 amateur draft as a pitcher. Continuing on to college, he was drafted out of junior college by the Boston Red Sox in the 20th round of the 2005 amateur draft as a pitcher. He transferred to Georgia Tech and after sitting out a year as a redshirt transfer, when to a summer collegiate league where he convinced his manager, former major leaguer Rusty Greer, to let him hit, as he just wanted to play. Greer was impressed enough by his prowess that he made him a starter in the outfield. Greer was impressed enough that he personally called Georgia Tech coach Danny Hall and told him he should give Blackmon a chance to play center field. Charlie realized his career as a pitcher had stalled and was willing to go along. He impressed enough in fall practice to earn a starting job next spring and then was drafted by the Colorado Rockies in the 2nd round of the 2008 amateur draft as an outfielder after hitting .396 as a senior. He was signed by scout Alan Matthews and made his pro debut that summer.

Blackmon made his big league debut on June 7, 2011, singling off San Diego Padres pitcher Dustin Moseley. He spent the first three seasons of his career on the shuttle between Triple A and the majors, never firmly establishing a grasp on a starting position. Before the 2014 season, his luck finally turned with the trade of Dexter Fowler to the Houston Astros freeing up space for him. On April 4, 2014, he tied a Rockies record by going 6 for 6 in a 12-2 win over the Arizona Diamondbacks. He had three doubles and a three-run homer, scored four runs and drove in five in the game; Andres Galarraga had been the only other player to get 6 hits in a game for Colorado, back on July 3, 1995. By adding three more hits in a 9-4 win the next day, he tied another club record with nine hits in two games, this one held by Juan Pierre since 2002. The hot start led to his being selected for the 2014 All-Star Game as he hit .288 with 19 homers and 72 RBI, scoring 82 runs and stealing 28 bases while splitting his time between right field and center. He had another solid season in 2015, this time as a full-time center fielder, when he played 157 games and hit .287 with 31 doubles, 9 triples and 17 homers. He scored a career-high 93 runs and stole 43 bases while being caught only 13 times.

After only 8 games in 2016, Charlie was placed on the disabled list on April 14th with turf toe, sprained ligaments around the big toe's joint. He was back in the lineup on April 29th and, having been at .185 at the time of the injury, began to hit better, even though it took a while for him to find his power stroke. That came at the end of May, when he led off a game on May 30th with a home run against the Cincinnati Reds, then did it again the next day against the same team. He was the first Rockies player to hit lead-off homers in back-to-back games, then he added a second homer in the homer in the second game, which was also his first career grand slam, as the Rockies tied a team record with 7 homers that day while demolishing the Reds, 17-4. It was Charlie's 500th career game, and the first of his homers was his 50th. In 143 games, he hit .324 with 29 doubles and 82 RBI while scoring 111 runs. That performance earned him a Silver Slugger Award as one of the National League's best-hitting outfielders.

On April 21, 2017, Charlie hit an inside-the-park homer in the 4th inning against the San Francisco Giants. In the same inning, teammate Trevor Story hit a grand slam, making it the first time a National League team had done this since 1950. He was named the NL Player of the Month for May after hitting .359 with 24 runs scored, 6 doubles, 5 triples, 6 homers and 29 RBI, as the Rockies were off to the best start in team history. On September 29th, a two-run homer in the second inning of a 9-1 win over the Los Angeles Dodgers gave him 101 RBI as a leadoff hitter, beating the previous record of 100 set by Darin Erstad with the 2000 Anaheim Angels. He added another RBI later in the game and finished the year with 104. His 86 extra-base hits also constituted an NL record for a leadoff hitter and he was the league batting champion at .331, to go along with 137 runs scored, 213 hits and 14 triples, all league-leading totals. He was named the winner of a Silver Slugger Award for the second straight year. The Rockies made the postseason for the first time since 2010, traveling to Arizona to face the Diamondbacks in the Wild Card Game on October 4. In his first taste of the postseason, he went 0 for 4 with a sacrifice hit and an RBI as the Rockies lost the game, 11-8.

On January 12, 2018, he signed a one-year deal with the Rockies worth $14 million, avoiding salary arbitration. He was slated to become a free agent after the season, but on April 4th, he signed a four-year contract extension with options for two more seasons, a package worth up to $108 million. His decision to remain with the Rox was made easier in light of the poor free agent market in the offseason that had just concluded, which did not bode well for a player like him given that he was already past 30 and all of his numbers had been achieved in a hitter-friendly environment. He returned to the All-Star Game that season, and while his numbers were down from his outstanding 2017 season, he still led the NL in runs scored as the Rockies returned to the postseason. On the final day of the regular season, September 30th, with Colorado needing a win to have a chance at the first division title in team history, he had a great day, hitting for the cycle to lead his team to a crushing 12-0 win over the Washington Nationals. That set up a one-game playoff against the Los Angeles Dodgers the next day, with the winner being crowned division title and the loser headed to the Wild Card Game. The Rockies lost the playoff game, but defeated the Chicago Cubs in the Wild Card Game, before being swept by the Milwaukee Brewers in the Division Series. Blackmon finished the year at .291 with a league-leading 119 runs scored in 156 games. He also hit 31 doubles and 29 homers while driving in 70 runs. All of these numbers were down compared to his outstanding season a year before, but he still had an OPS+ of 115, making him one of the most productive hitters on the Rockies. His bat went cold in the postseason like most of his teammates, as he was just 1 for 12, the lone hit being a single.

As spring training started in 2019, the Rockies announced that he would be moving from center field to right field, with former infielder Ian Desmond taking over in center. He had a tremendous four-game series against the San Diego Padres on June 13-16. He set a team record with three consecutive four-hit games in the first three games, then added three more in the fourth to go 15 for 24 with 4 homers, 9 runs and 10 RBI. The two teams set a major league record with 92 runs scored during the four games. The 15 hits in a four-game series were a record, one more than the previous record of 14 set by Buck Jordan in 1934 and Bill White in 1961. He then made it five straight games of three or more hits in an 8-1 win over the Arizona Diamondbacks on June 18th. Charlie was just the 12th player since 1900 to do that. He rode that great series to being named the NL Player of the Month after hitting .412 with 10 homers and 25 RBI in June. He was also named to the All-Star team for the fourth time. On the season, he batted .314/.364/.576 with 32 home runs and 112 runs scored.

On June 23, 2020, he was the first major league player revealed to have tested positive for COVID-19, along with teammates Phillip Diehl and Ryan Castellani, likely as the result of recent informal workouts at Coors Field. He recovered in time to start the season with the Rox and showed no after-effects from the infection as he started the year insanely hot. After 17 games on August 11th, he was batting an even .500 (34 for 68) and leading the majors in hits, runs scored and RBIs. Only 7 players in major league history had ever managed to hit .500 through that many games and at least 50 plate appearances, the most recent being Barry Bonds in 2004; one of them was former Rockies player Larry Walker, in 1997.