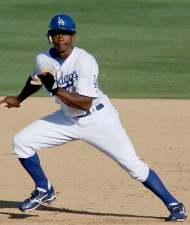 Pierre was born in Alabama, went to high school at Alexandria (LA) High School and attended college at the University of South Alabama, where he was 1998 Sun Belt Conference Player of the Year.

After the 2006 season he signed a five-year contract with the Los Angeles Dodgers, although it was not clear whether he would bat first in the lineup, second, or elsewhere. The contract was criticized as he was likely to block one of the Dodgers' younger - and better-hitting - outfielders, Matt Kemp and Andre Ethier. In 2007, he was indeed a regular, playing all 162 games and banging out 196 hits in 668 at bats without hitting a single home run. However, in 2008, after the Dodgers signed Andruw Jones, who would turn out to be a tremendous flop, he played only 119 games, hitting a customary .283 with 40 steals. He was no longer starting when the team acquired slugger Manny Ramirez to play left field at the trading deadline. In 2009, he filled in for Ramirez while he was serving a 50-game suspension for a violation of Major League Baseball's PED policy. He played 145 games, hitting a solid .308 - his highest average since 2004 - and stealing 30 bases. Both years, he saw very little use in the postseason, as the Dodgers lost twice to the Philadelphia Phillies in the National League Championship Series: 4 plate appearances in 2008, and 3 in 2009. After that season, he was traded to the Chicago White Sox, as his playing style was closer to that favored by Sox manager Ozzie Guillen.

Through age 31, according to the similarity scores method, the most similar player to Pierre was Willie Wilson, the good-hitting speedster who had a 19-year career from 1976-1994. Two of his comparables were in the Hall of Fame - Max Carey and Harry Hooper - but both played in the deadball era. There was a statistical chance that Pierre could have reached 3000 hits if he had continued to play regularly into his late 30's, which prompted some speculation about how the BBWAA would treat such an atypical Hall of Fame candidacy, but in the end he fell well short of the mark. As of 2011, he had the most career bunt hits among active players. The percentage of his base hits that were singles is the second-highest in baseball history at 83.3 %, behind Maury Wills.

Pierre returned to his original franchise, now renamed the Miami Marlins, for the 2013 season. He was one of only a handful of veterans on a very young team expected to struggle to score runs. On May 2nd, he swiped the 600th base of his career in a 7-2 loss to the Philadelphia Phillies, becoming only the 14th player in history to reach that total; it was already his 9th steal of the season, and he needed only 50 more to enter the all-time top 10, as Bert Campaneris occupied the 10th spot with 649, but fell short of that goal. He finished the season with a .247 average in 113 games with 23 steals. He did not play anywhere in 2014 and officially announced his retirement in February of 2015.

In 14 seasons, he hit .295 in 1994 games, with 2217 hits and 614 stolen bases. Pierre retired as the active leader in stolen bases. He became eligible for the Hall of Fame in 2019 but did not receive a single vote in his lone appearance on the ballot. a couple of days after the voting results were announced, the Marlins indicated that they had offered Pierre a position in their player development department as minor league outfield coordinator.