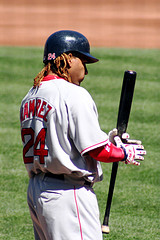 Manny Ramirez was one of the most feared sluggers of his time, hitting over 500 home runs and gathering over 1,500 RBIs in a 19-year career in which he was a key contributor to two World Championships by the Boston Red Sox, including the one that broke the famed 78-year "curse" on the team in 2004. However, his legacy has been tainted by two suspensions for using banned substances towards the end of his career, the second of which put a premature end to his career as a big league player.

In high school in New York, NY, Ramírez was named to the All-City team in 1989, 1990 and 1991 and was the New York City Public Schools High School Player of the Year in 1991, when he batted .615 with 14 homers in 22 games. He was second to Bob Hamelin in the 1994 American League Rookie of the Year Award voting. In 1999 he was inducted into the New York City Public Schools Athletic Hall of Fame with Bobby Thomson, John Franco, Shawon Dunston and basketball star Nate "Tiny" Archibald.

He crossed the 1,500 RBI line, historically a major Hall of Fame marker, at the age of 34. In 2008, Ramirez entered the list of top twenty all time home run leaders.

Ramirez hit his 500th career home run on May 31, 2008, off Chad Bradford. He was the 24th player in major league history to have socked 500 and was right in the middle in terms of age, being 12th-youngest and 13th-oldest. Ramirez was the 8th player in MLB history to hit 20+ homers in 14 consecutive seasons (1995-2008). He was a key run producer in the middle of the Boston Red Sox's line-up for many years, from 2001 to 2008, combining with DH David Ortiz to form a fearsome tandem. He was a key contributor to both Sox World Series titles that decade, in 2004 and 2007. As a result, he was adulated in Boston for a long time, in spite of his enigmatic personality. Some more damaging information about his personality, and its effect on team morale, came out in 2008. There was speculation that a lot of this had been leaked by team management, which was looking to trade him but wanted to prepare the fan base first by changing Manny's image to that of a "clubhouse problem".

Ramirez was traded with $7 million to the Los Angeles Dodgers on July 31, 2008 as part of three-team deal that sent Jason Bay of the Pittsburgh Pirates to the Boston Red Sox. Boston also gave up Brandon Moss and Craig Hansen to Pittsburgh while Los Angeles sent Andy LaRoche and Bryan Morris to the Bucs. Ramirez excelled with LA, helping lead them to overtake the Arizona Diakondbacks in the NL West for a playoff spot. He topped 50 RBI in his first couple of months with the Dodgers, becoming the second big leaguer with 50 RBI in each league in a year (joining Carlos Beltran). He hit .396 in 53 games in LA, with 14 doubles, 17 homers and 53 RBI and was undoubtedly the biggest story of the major league season's second half. The Dodgers were defeated by the Philadelphia Phillies in the 2008 NLCS, but Manny had rescued what appeared to be a completely lost year. In 2009, the love affair soured, as he missed 50 games because of a drug suspension (see below). He still hit .290 in 104 games, with 19 homers and 63 RBI as the Dodgers returned to the postseason, again losing to the Phillies in the NLCS. He hit .298 in 90 games for the Dodgers in 2010, but by then Manny had become more of a distraction than anything, with his indifferent fielding, frequent ailments and declining power. He was traded to the Chicago White Sox late in the year to help in a pennant run that never materialized, then became a free agent after the season.

After signing with the Tampa Bay Rays for the 2011 season Ramirez appeared in five games for the team before announcing his retirement. Ramirez had been informed on April 8th of an issue with the MLB drug policy. If he was to be suspended it would be his second suspension and would have lasted 100 games. He hit only .059 in his brief appearance for the Rays, then got into more trouble later in the year when he was arrested at his Weston, FL residence and charged with battery, being accused of hitting his wife Juliana in the face. On December 4th, he applied for reinstatement from the voluntarily retired list, but would still need to serve his suspension if he signed with a team. The Oakland Athletics decided to take a chance on Ramirez giving him a minor league deal at the start of spring training in 2012. The A's caught a break when Major League Baseball decided to discount Manny's suspension to 50 games, stating that the time missed the previous season would be taken into account. Thus, he only had to wait until May 19th to be allowed to return to the playing field; on that date, he headed to the AAA Sacramento RiverCats to get himself ready to return to the big leagues on May 30th, the day his suspension officially ended. However, the A's failed to bring him up when he became eligible, and when they had still not done so by June 15th, he requested and was granted his release, becoming a free agent. He had batted 19-for-63, hitting .302 with 14 RBI, 3 doubles, no homers, 5 walks and 17 SO in 17 games for Sacramento.

Unable to find another team, he decided to continue his comeback the following winter in the Dominican League, signing with the Águilas Cibaeñas in the hope of catching a major league team's attention. On the first pitch he saw in his first winter league at-bat on November 14th, he took former major leaguer Daniel Cabrera deep for a home run, showing he meant business. However, offers from major league clubs were not forthcoming, and the following March, he accepted an offer from the EDA Rhinos of the Chinese Professional Baseball League. He hit .352 with 8 home runs, 13 doubles and 43 RBI in Taiwan. At the time, he was among the 2013 CPBL leaders in average and home runs (trailing only Yi-Chuan Lin). He was also a huge attendance draw. Ramirez said he was homesick, though, and left the team in late June. On July 3rd, the Texas Rangers took a chance on him, signing him to a minor league contract and having him report to the AAA Round Rock Express, with a promise of being brought up to the big club quickly. It was an open secret that the Rangers were in fear that starting RF Nelson Cruz would be suspended because of his involvement in the Biogenesis scandal and that Ramirez was a seen as a possible replacement. However, Ramirez did not set the world on fire in the minors, hitting .259 with 3 homers in 106 at-bats, and when the hammer came down on Cruz in early August, he was not given the call to the Show. Instead, the Rangers traded for Alex Rios and a few days later, on August 13th, handed Manny his release.

Ramirez came back to organized baseball once again in 2014, this time as a player-coach with the Iowa Cubs of the Pacific Coast League, signing a contract on May 25th. Manny explained that he had not yet ruled out a return to the majors. He played his first game for Iowa on June 26th. He played 24 games for Iowa, hitting .222 with 3 homers and 10 RBI in only 72 at-bats. In 2015, he joined the Chicago Cubs in spring training, but it was strictly in the role of hitting instructor and he reassured reporters that he had given up all ideas of making a comeback as a player. He had played winter ball with the Aguilas Cibaenas and done very well, hitting .409 with 6 homers and 28 RBIs, leading to speculation that he was looking for more than simply teach youngsters about what to do and not to do as a professional baseball player.

In January 2017, he announced that he had signed a contract to play with the Kochi Fighting Dogs of the Shikoku Island League, an independent league in Japan. In April 2020, he told the Taiwan Times newspaper that he wanted to make a comeback and play again in the CPBL, this time as a player/coach.

On May 7, 2009, Ramirez was suspended 50 games after testing positive for a banned substance. After consulting with the Players Association and with his personal counsel, he waived his right to challenge the suspension. Ramirez did issue the following statement in response to the suspension:

"Recently I saw a physician for a personal health issue. He gave me a medication, not a steroid, which he thought was okay to give me. Unfortunately, the medication was banned under our drug policy. Under the policy that mistake is now my responsibility. I have been advised not to say anything more for now. I do want to say one other thing; I've taken and passed about 15 drug tests over the past five seasons. I want to apologize to Mr. McCourt, Mrs. McCourt, Mr. Torre, my teammates, the Dodger organization, and to the Dodger fans. LA is a special place to me and I know everybody is disappointed. So am I. I'm sorry about this whole situation." – Manny Ramirez [1]

The suspension cost Ramirez about $7.65 million, based on his two-year, $45-million contract with the Dodgers signed in March, 2009.

There was lengthy discussion in the media on the possible substance Ramirez could have taken. Sources close to the case said Ramirez used the female fertility drug HCG, or human chorionic gonadotropin. HCG is typically taken at the end of a steroid program to restart testosterone production in the body. [2] The suspension was believed to be the result of a drug test taken in 2009, as Ramirez was a free agent during the winter of 2008-2009, and would not have been subject to the League's drug testing program. Drug testing is required of players within five days of reporting to training camp, and he had only signed with the Dodgers in March 2009. [3]

In April, 2011, Ramirez was notified that there was a new issue relating to the policy. On April 8th, Ramirez announced his retirement rather than "continue with the process under the program". [4] The process would have meant an immediate 100-game suspension. However, the following December, he applied for reinstatement, meaning the outstanding violation under the Joint Drug Prevention and Treatment Program needed to be dealt with. MLB ruled that the time missed in 2011 would count towards half of his suspension, reducing his penalty to 50 games, that was served at the beginning of the 2012 season after he signed with the Oakland A's, even though he never actually played for Oakland.

It is clear that the violations have hurt his chances for entry into the Hall of Fame significantly. [5] In spite of his many returns to professional baseball following his ignominious retirement in April of 2011, he was eligible for the Hall for the first time on the 2017 ballot. His vote total was only 23.8%, well below two other serious first-year candidates, Ivan Rodriguez and Vladimir Guerrero, who both received over 70% of the vote. It was clear that his dabbling with PEDs had significantly hurt his candidacy, although he had enough of a base of votes to still make his candidacy viable over the longer term. However, he fell to 22% in 2018, not a positive sign at all. He stalled at 22.8% in 2019, then jumped up to 28.2% in 2020. While many down-ballot players made huge gains in 2021, it was not the case with those associated with steroids, as he stalled at 28.2%, just as the better-placed Barry Bonds and Roger Clemens had done.

Ramirez and his wife Juliana make their off-season home in the Fort Lauderdale, FL area. Their son Manny Ramirez Jr., a first baseman with a sweet stroke and good power potential, was a local high school prospect who was eligible for the 2013 amateur draft but was not selected.