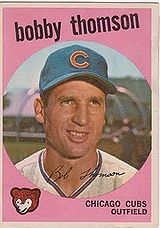 Outfielder Bobby Thomson hit 264 home runs during a 15-year big league career, mostly with the New York Giants. He is best remembered for hitting a game-winning homer known as the "Shot Heard 'Round the World" that sent the Giants to the 1951 World Series.

Born in the Townhead area of Glasgow, Scotland, Thomson arrived at Ellis Island with his mother and five siblings on the SS Caledonia on July 1st, 1926; they joined his father, who had left Glasgow for Midland Beach, Staten Island just two days after his birth. He signed with the Giants and began his pro career in 1942 before missing the next three seasons while serving in the military during World War II.

Thomson hit a career-high 32 home runs in 1951, as New York ended the regular season tied with the Brooklyn Dodgers. On October 3rd, in the final game of a three-game playoff between the clubs, he hit a game-ending, three-run home run off Ralph Branca. Dubbed the "Shot Heard 'Round the World," it is considered by many to be one of the most memorable and dramatic homers in baseball history. A famous radio call of the event was made by Russ Hodges: "The Giants win the pennant! The Giants win the pennant!" However, his club fell to the New York Yankees in six games in the World Series.

Thomson hit 24 home runs with 108 RBI in 1952 while leading the National League with 14 triples. Prior to the 1954 season, he was dealt to the Milwaukee Braves. Slated to be their starting left fielder that year, he suffered a broken ankle in spring training; instead, the team started a little-known rookie named Hank Aaron. Thomson bounced back and hit 20 home runs for the team in 1956. On May 30th of that year, he clubbed four round trippers during a doubleheader against the Chicago Cubs.

During the 1957 season, Thomson was traded back to the Giants, and the following spring, in 1958, he was sent to the Chicago Cubs. He hit 21 homers in his first year in Chicago. After two seasons with the club, he was dealt to the Boston Red Sox. He ended his big league career after splitting the 1960 campaign between the Red Sox and the Baltimore Orioles.

After his playing career, Thomson became a salesman for a paper company where he worked for over 30 years. He settled in Savannah, Georgia, where he died in 2010, aged 86.

Although he was responsible for one of the most famous moments in US sports history, Thomson remained relatively unknown in the country of his birth. In 2004, he was inducted into the Scottish Sports Hall of Fame in recognition of his accomplishments.