Note: This page discusses Hall of Fame catcher Iván Rodríguez. For the Hoofdklasse coach of the same name, click here. 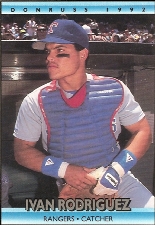 Iván Rodriguez has caught more games than anyone in major league history and is one of the greatest defensive catchers of all-time, with 13 Gold Gloves to his credit plus 13 All-Star appearances. A base-stealer's worst nightmare, Rodriguez led the majors in 2006 by thowing out almost 50 percent of base stealers. After 1836 games in the field as a catcher, Rodriguez played his first game at first base on May 9, 2006. In 2007, he passed Gary Carter to become the all-time leader for putouts among catchers. In 2009, he passed Carlton Fisk for most games caught.

Despite being almost a .300 career hitter, Rodriguez is a free swinger who seldom walks (only 11 BB during 2005, 9 BB (in 515 plate appearances) during 2007 while garnering more than 90 strike outs during both years and, as a result, has a rather low career OBP of .337 - very low for a potential Hall of Famer. In addition, his career has been tainted by steroid accusations from former teammate Jose' Canseco. In 1996 he hit 45 doubles, which was the all-time mark for a catcher, besting the 40 hit by Terry Kennedy in 1982; the mark stood for 18 years until broken by Jonathan Lucroy in 2014.

Pudge began his career with the Texas Rangers, and is still admired by many Texas fans according to a poll conducted in 2007 on the Rangers' MLB.com website. His 1,747 hits were a Rangers team record until broken by Michael Young in 2010. When he signed as a free agent in 2003 with the Florida Marlins, they went on to win their second and most recent World Series title. He was also a member of the losing 2006 World Series Detroit Tigers.

On July 30, 2008, Rodriguez was traded to the New York Yankees in return for hard-throwing reliever Kyle Farnsworth; the trade came on the same day on which the Yankees announced that regular catcher Jorge Posada would miss the remainder of the season after undergoing surgery on his throwing shoulder. He ended up sharing catching duties with Jose Molina during the remainder of the season and became a free agent. After remaining unsigned for most of the winter, he found a home with the Houston Astros for the 2009 season after a solid performance in the 2009 World Baseball Classic. He hit .251 in 93 games, then on August 18th, he was traded back to the Texas Rangers in return for two minor leaguers. He .245 in 28 games for Texas at the tail end of the 2009 season and was widely expected to finish his career with the Rangers, but he instead signed with the Washington Nationals for 2010. He had an opportunity to be the team's starter in the first months of the season, until the Nats acquired Wilson Ramos in a trade with a view to make him their starting backstop. Still, Pudge played 111 games and had another fine season, batting .266 with 18 doubles and 49 RBI. In 2011, Ramos took on the starting job full time, with Rodriguez backing him up. He played another 44 games, but hit only .218 in 124 at-bats. He hit the final two homers of his career, and played his last game on September 28th. He wanted to keep playing after the season, but received no contract offers and decided to retire. He returned to Texas to make the official announcement on April 23, 2012. That day, the Rangers invited him to throw the ceremonial first pitch in the day's game against the Yankees; Pudge made the pitch from his familiar position behind the plate, throwing the ball to Michael Young at second base, who tagged out an imaginary baserunner as the crowd cheered.

Rodriguez hit 572 doubles over the course of his 21-year career, putting #1 on the all-time list for doubles by players who were primarily catchers. He holds the record for most games played (2427) at catcher, and also held the recorded for putouts with 14,864 until passed by Yadier Molina in 2022.

He was elected to the Hall of Fame in his first appearance on the ballot, in the 2017 Hall of Fame Election. He received 76% of the votes, or four more votes than the minimum required for election; that made him only the second catcher, after Johnny Bench, to become a first-ballot Hall of Famer. In honor of Pudge's election to Cooperstown, the Rangers retired his uniform number 7 on August 12th, two weeks after his induction.

His son Dereck Rodriguez reached the majors in 2018.