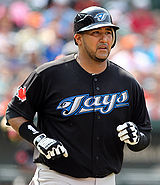 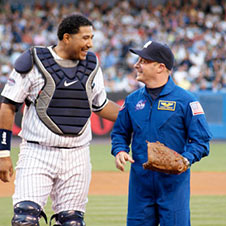 Molina speaks with a NASA astronaut

Jose Molina's brother Yadier Molina plays for the St. Louis Cardinals. A third brother - and José's former teammate with the Anaheim Angels - Bengie Molina - was the Angels' starting catcher through the 2005 season. José and Ben shared the Angels' catching job for several years. There were two other catchers named "Molina" active around that time as well - Gustavo Molina and Izzy Molina - but they were not related to the three brothers.

A back-up for most of his career, José Molina had a chance to play almost regularly with the New York Yankees in 2008, when Jorge Posada missed a large part of the year with a shoulder injury. He played good defense, but hit very little, prompting the Yankees to obtain veteran Ivan Rodriguez from the Detroit Tigers late in the year. Still, he started the last game ever played at Yankee Stadium on September 21st and hit the last home run in the House that Ruth Built, a two-run shot off Chris Waters in the 4th inning which proved to be the difference in a 7-3 Yankees win over the Baltimore Orioles. He returned to the Yankees in 2009 as Posada's back-up. He spent two months on the disabled list early in the season with a strained quad muscle but got some playing time late in the season as the preferred catcher of pitcher A.J. Burnett. This extended into the postseason, where he was behind the plate for all five of Burnett's starts as the Yankees won the World Series.

Molina signed with the Toronto Blue Jays in February 2010, with an option for 2011. On November 28, 2011, he signed with the Tampa Bay Rays after two years with the Canadian club. He ended up the Rays' most-used catcher over the next two years, hitting .223 in 102 games in 2012 and .233 in 99 games in 2013. He also backed up brother Yadier on the Puerto Rican national team in the 2013 World Baseball Classic, going 0 for 3 in his limited time, retired by Wandy Rodriguez, Lorenzo Barcelo and Octavio Dotel. Satisfied with his production, the Rays re-signed him for another two years after the 2013 season. However, his hitting was quite poor in 2014, as he was down to .178 with only two extra-base hits - a pair of doubles - in 225 at-bats; still, he defensive play was so good that he managed to make more starts and catch more innings than Ryan Hanigan, who had been acquired the previous off-season to be the Rays' main catcher.

In 2019, Molina joined the coaching ranks as catching coach of the Los Angeles Angels.