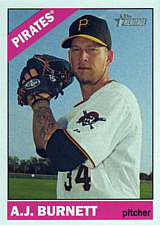 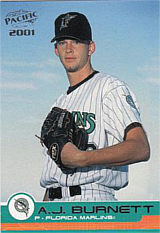 A.J. Burnett spent parts of 17 seasons in the big leagues. He tossed a no-hitter and made his lone All-Star appearance in his final season.

Burnett was drafted by the New York Mets in the eighth round of the 1995 draft. Fellow major leaguer Craig Monroe was also taken in this round, several spots higher than Burnett. He was traded to the Florida Marlins for Al Leiter in 1998, one of several very good young players the Marlins acquired when they dismantled their 1997 Championship team. He made his big league debut on August 17, 1999, facing the Los Angeles Dodgers and allowing just one hit (a solo home run to Todd Hollandsworth) in 5 1/3 innings to earn a 6-1 victory. He saw limited action his first two seasons, 20 starts between 1999 and 2000. His first brush with fame came May 12, 2001, when he pitched a 3-0 no-hitter against the San Diego Padres. His second start of the season, the base paths were still busy for the Friars as A.J. walked 9 while striking out 7. He ended the season with a solid 11-12 record and a 4.05 ERA for the young Marlins, giving a hint of future stardom. His five shutouts in 2002 led the National League and established a Marlins single-season record that was later tied by Dontrelle Willis. He was also first on the club's career shutout list, with 6, until 2002, and ended his Florida career with 8 (since passed by Willis as well). He improved to 12-9, 3.30 that season and seemed ready to form a tremendous duo with Josh Beckett.

But it was not to be. Burnett's career was derailed when he underwent Tommy John surgery after only four starts in 2003, missing the team's run to the 2003 World Championship. He came back in 2004 to make 19 starts and won six of his last seven decisions, including a 14 strikeout outing against Colorado - a Marlin team record (until passed by Ricky Nolasco years later). After a solid season in 2005, in which he won 12 games and pitched over 200 innings, he became a free agent and was signed by the Toronto Blue Jays. Burnett went 10-8 for the Blue Jays in both 2006 and 2007, missing time both seasons with various injuries, and alternating between utter dominance and frustrating results. He put it all together in 2008, winning 18 games and striking out a league-leading 231 batters. Showing 200 innings for the first time in three seasons, he tied for the most starts in the American League with 34 and pitched the third most innings in the circuit. As a clause in his contract allowed him the possibility to opt out after three seasons, speculation grew as to whether he would become a free agent at the end of the year, as he was demonstrating that he could be a top-line starter. The New York Yankees' Hank Steinbrenner even expressed interest in him publicly as the season was winding down in a statement that was very close to tampering.

Burnett did in fact sign a lucrative free agent contract with the Yankees after the season, joining CC Sabathia and Mark Teixeira as new Yankee high-priced toys to play with in 2009. He had a solid first season in the Bronx, helping the Yankees to the 2009 World Series title. He went 13-9, 4.04 in 33 starts, pitching over 200 innings while striking out 195. He did walk an American League-leading 97 batters but formed a solid threesome with Sabathia and Andy Pettitte at the top of the starting rotation. He pitched 6 solid innings with a no-decision against the Minnesota Twins in Game 2 of the ALDS, then made two starts against the Los Angeles Angels in the ALCS. He did not do as well, giving up 8 runs in 12 1/3 innings, but did not suffer a loss as the Yanks moved on the World Series. He registered a key win in Game 2 of the Fall Classic, giving up a run in 7 innings after the Philadelphia Phillies had won Game 1. He lost Game 5 when he gave up 6 runs in 2 innings, but overall his contribution was quite positive. One bad note was that he was unable to work well with veteran Yankee catcher Jorge Posada and forced Joe Girardi to team him with defensive stalwart backup Jose Molina during his starts. Things were considerably less exciting in 2010, as he fell to 10-15, 5.26 in 33 starts and struggled with inconsistency. He lost his only postseason start, giving up 5 runs in 6 innings in a Game 4 start against the Texas Rangers in the ALCS. 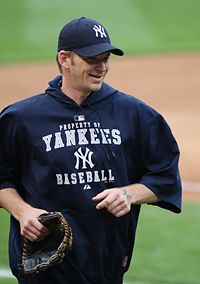 Burnett struggled some more in 2011, at a time when he was expected to step up following the retirement of Pettitte. He finished 11-11 with a 5.15 ERA. He still had good stuff, as his 173 strikeouts in 190 1/3 innings showed. But he was like Forrest Gump's proverbial box of chocolates: the Yankees never knew what they were going to get when they sent him to the mound. In his only postseason start, it was the good A.J. that showed up: he gave up a single run in 5 2/3 innings to lead the Yankees to a 10-1 win over the Detroit Tigers in Game 4 of the ALDS, but the Yankees lost Game 5 to bow out of the playoffs early. The Yankees' brass had too much of his inconsistency by then. After acquiring starters Michael Pineda and Hiroki Kuroda in the offseason, they began shopping A.J. around, a task made difficult by his hefty salary. On February 17, 2012, they found a taker in the Pittsburgh Pirates, but had to agree to pick up $20 million of the $33 million remaining on his contract for the next two seasons. In return they received two minor leaguers a long way from making any contribution in the big leagues in pitcher Diego Moreno and outfielder Exicardo Cayones. The deal was official the next day, after A.J. passed a physical and Commissioner Bud Selig gave his approval, a necessary step given the amount of money involved.

Unfortunately for the Pirates, Burnett was injured at the very start of spring training in 2012. While practicing bunting on February 29th, he fouled a ball into his face and tests showed that he had fractured an eye socket. He underwent surgery two days later, and faced a 2 to 3 month recovery period, but in fact it was much quicker, as he made his debut on April 21st. It was worth the wait, as he pitched seven scoreless innings, giving up only 3 hits while striking out 7 in beating the St. Louis Cardinals, 2-0. Just a couple starts later, on May 2, Burnett was shellacked for 12 runs in 2 2/3 innings, the most runs allowed by a Pirate pitcher since 1932. The Elias Sports Bureau reported that no one had allowed that many runs in under 3 innings since earned runs became an official stat in 1913. That outing was an uncharacteristic blip on a fine season. After that shellacking, he became unbeatable, and on June 28th collected the win for an 8th consecutive start when he beat the Philadelphia Phillies, 5-4. His record stood at 9-2, 3.31, and his outstanding performance was a major reason the Pirates were now 5 games over .500 and a game out of 1st place in the NL Central. No Pirate had won eight straight games since Dock Ellis in 1974. On July 31st, he pitched perhaps the best game of his career - better than his no-hitter - in shutting out the Chicago Cubs, 5-0. He allowed only a single hit, a single by pinch-hitter Adrian Cardenas with two outs in the 8th, walked only two and hit a batter while striking out 8 to improve to 13-3. He cooled down during the last two months - as did the Pirates, who again finished below .500 after a strong start - but was still 16-10, 3.51 while pitching 202 innings and striking out 180 batters as the Bucs' uncontested ace.

He pitched a memorable game on April 17, 2013, when he recorded the 2,000th strikeout of his career in the 2nd inning, the victim being Carlos Beltran of the St. Louis Cardinals. That day, he did not give up a hit through the first six innings, the only baserunner being a hit batsman; Beltran broke his bid for a second no-hitter when he hit a two-out double in the 7th. Burnett left after 7 innings, having allowed only that one hit while striking out 8, and was credited with the 5-0 win. Burnett finished the season 10-11 with a 3.30 ERA and 209 strikeouts in 191 innings, with an identical 107 ERA+ to 2012. He led the NL in strikeout rate and was 5th in strikeouts. In the playoffs, he crumpled in Game 1 of the NLDS, giving up 7 runs in two innings in a loss to the Cardinals. When the Series went a full five games, skipper Clint Hurdle bypassed Burnett in favor of rookie Gerrit Cole, given Burnett's poor Game 1 performance and history at Busch Stadium. Cole did okay but the Bucs offense came up nearly empty in a loss. After the season, Burnett said he would either retire or return to the Pirates. In late January 2014, he started testing the waters of free agency and, on February 16th, signed a two-year deal with the Philadelphia Phillies worth up to $33.5 million with performance bonuses. He explained that he wanted to play near his home in Monkton, MD and that Philly, a mere hour and a half away, fit the bill better than Pittsburgh, which was also interested in bringing him back.

Burnett had a difficult season for the Phillies in 2014. While he was a workhorse, making a National League-leading 34 starts, the results were poor, as he also led the circuit in losses, earned runs and walks allowed. His record was 8-18, 4.59 for the last-place team, but he did pitch 213 2/3 innings and struck out 190 batters. On August 25th, he struck out 12 Washington Nationals batters in a game, making him the first pitcher to have a 12-strikeout game for five different teams. A free agent again after the season, he decided to return to Pittsburgh, in order to have another shot at the postseason. "This is where I belong", he told the press, acknowledging that bolting for Philadelphia had been a mistake. It was widely understood that 2015 would be his last season in the majors, and the Pirates wanted him to go out on top, because they appreciated how much his presence on the team in 2012 and 2013 had contributed to breaking the team's historic run of losing seasons, turning the franchise around. He was rising up to the occasion, with a record of 6-3, 2.05 in 14 starts, and the Pirates lobbying hard to have him make the All-Star team for the first time at 38, a campaign which was successful as he was named one of the NL's pitchers for the game. He slowed down by the end of the season, finishing 9-7, 3.18 in 26 starts, and called it a career.

Burnett finished his career with a 164-157 mark, a 3.99 ERA and 2,513 strikeouts in 435 games. He was a classic power pitcher, with an outstanding fastball and control problems since he might never know just where the ball was going. His curveball could also be devastating - when he controlled it. He had a bit of a bad boy image, with heavy tattoos and a reputation in his youth for being difficult to get along along with. He gained a lot of maturity in his 30s, to the point where he was called a model teammate in his later years. He became eligible for the Hall of Fame in 2021 but was dropped off the ballot after failing to receive a single vote.