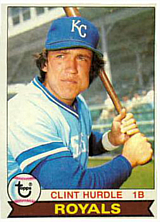 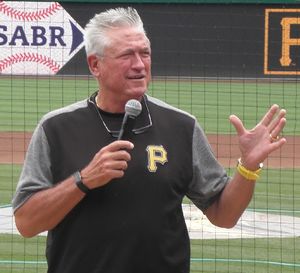 Clint Hurdle was a first-round pick whose promising career was derailed at age 23 by a back injury. From April 2002 through May 2009 he managed the Colorado Rockies, leading them to the 2007 World Series. He later managed the Pittsburgh Pirates.

Selected by the Kansas City Royals with the 9th overall pick in the 1975 amateur draft (the scout was Bill Fischer), outfielder Hurdle reached the majors in 1977 as a 20-year-old. In spring training in 1978, he was featured on the cover of Sports Illustrated as a "can't miss" prospect, something which was later held to have jinxed his career. That season, he was given regular playing time alongside stars such as George Brett, Amos Otis, Willie Wilson, and Hal McRae, at a time when the Royals were winning a division title practically every year. He hit a decent .264, but without the expected power, and went 3 for 8 in the ALCS. After struggling at the plate and being sent down to the Triple A Omaha Royals in 1979, he became a regular the next year, 1980, hitting .294 with 10 homers while batting seventh in the lineup, behind Otis. In the 1980 World Series, he appeared in 4 games, hitting .417.

Hurdle began 1981 putting up even better numbers, and despite missing considerable time due to injuries, still managed to hit .329. After that season, he was traded to the Cincinnati Reds for pitcher Scott Brown. This is when he was sidelined by a back injury that almost ended his career there and then; it did not, but it ended his chances of ever being a major league regular again. He only hit .206 in 19 games for the Reds in 1982, and .245 but with decent power for Triple A Indianapolis. He was released at the end of the year.

After hitting .282 with 22 homers and 105 RBI for the Tidewater Tides in 1983, Hurdle later played briefly for the New York Mets (who attempted to convert him to catcher) and the St. Louis Cardinals. He spent the entire 1985 season with the Mets as a third-string catcher, but only gathered 82 at-bats. He retired after the 1987 season, which he split between New York and Tidewater. In 1989, he played for the St. Lucie Legends of the Senior Professional Baseball Association and hit .252 in 42 games with the club.

After his playing career ended, Hurdle was a manager in the New York Mets minor league system for six years. He moved to the Colorado Rockies in 1994 as a minor league hitting instructor for three seasons. Starting in 1997 he was the Rockies hitting coach (and first base coach in 1997-1998) for more than five seasons before becoming the club's manager in April 2002. After five consecutive losing seasons at the helm of the Rockies, he led them to a surprise postseason appearance in 2007. The team seemed to be well out of the race by mid-September, but suddenly caught fire, finishing the regular season with a 13-1 run to tie the San Diego Padres for second-best record in the National League. The Rockies played a one-game playoff with the Padres and came out on the right end of an epic, 13-inning, 9-8 game to clinch the NL wild card. The team then swept through the NLDS and the NLCS to reach the World Series for the first time in history. The fairy tale season ended there, as the Rox were swept by the Boston Red Sox in the World Series

The last two teams in major league history (through 2007) to win 19 out of 20 are the 1977 Royals, which featured Clint Hurdle as a player, and the 2007 Colorado Rockies, featuring Hurdle as manager.

He was dismissed by the Rockies on May 29, 2009 after having been manager since 2002. He had been affiliated with the Rockies since 1994 and was offered a different job by the organization; he was replaced by bench coach and former big league skipper Jim Tracy. In 2010, he served as hitting coach for the Texas Rangers as the team went all the way to the World Series, largely on the strength of its hitting. On November 15th, he was introduced as the manager of the Pittsburgh Pirates for 2011, taking over for John Russell. In each of his first two seasons with the Pirates, he had the team playing over .500 ball in the first half, only to suffer a dramatic collapse in the second half and finish well below the magic mark. Those two seasons brought the Pirates' string of losing seasons to a record of 21.

The skein was finally broken in 2013 when, after a slow first week, the Pirates got hot in April and stayed in a three-team race for not only the best record in the NL Central but in all of the major leagues with the Cardinals and Reds, two teams Hurdle once played for. In the end, the Cardinals ended up on top, winning the division title, but the Pirates came in second, finally breaking the string of losing seasons and also making the postseason for the first time since 1992. They hosted the Reds in the Wild Card Game and won, then pushed the Cards to the five-game limit in the Division Series to end a very successful season. Hurdle's role in the turnaround was recognized when he was named the National League Manager of the Year after the season. Hurdle led the Bucs to the playoffs once again in 2014, when they again finished behind the Cardinals in the NL Central but hosted the Wild Card Game. This time, however, they were blanked by the eventual winners of the World Series, the San Francisco Giants. 2015 was a very good season that came to a frustrating end, as with 98 wins, they had the second best record in all of Major League Baseball, but finished second in their division behind the Cardinals. That forced them to put everything on the line in the Wild Card Game, which they lost to the Chicago Cubs and nearly untouchable (at the time) Jake Arrieta for another early postseason exit. The Pirates slowly sank back into mediocrity after that, finishing third, then fourth twice in the next three seasons as the core of the 2013-2015 faded away (for the most part) or left via free agency and trades (some of them around the time they faded, Gerrit Cole being the notable exception). In 2019, a very poor second-half sent them all the way to the cellar and Hurdle was fired on September 29th, prior to the season's final game. He was 4th in Pirates history in managerial wins behind Fred Clarke, Danny Murtaugh and Jim Leyland.