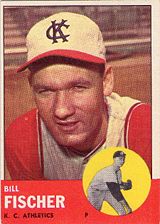 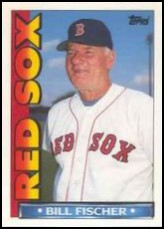 Bill Fischer pitched nine years in the majors and still holds the record for most consecutive innings without issuing a walk. After his playing days, he was a long-time big league pitching coach.

Signed by the Chicago White Sox as a 17-year-old, Fischer missed the entire 1952 and 1953 campaigns while serving in the military. He came back to baseball in 1954 and reached the majors in 1956. In his big league debut, facing the Kansas City Athletics on April 21st, he got shelled, giving up hits to all four batters he faced (all four of whom eventually scored). He fared better in two more outings for the White Sox, allowing no runs, but was back in the minors by May. He was back with Chicago, however, for the entire 1957 season, going 7-8 with a 3.48 ERA in 33 appearances.

In June 1958, Fischer was dealt to the Detroit Tigers, and then was claimed off waivers by the Washington Senators that September. In 1959, he had his best season in the majors, posting a 9-11 record and a 4.28 ERA in 34 games. While wearing a Senators uniform, he also hit his only career major league home run, facing Hank Aguirre of the Tigers on June 26, 1960. The following month, he was dealt back to Detroit for Tom Morgan. He remained a Tiger for about a year before being traded to the Kansas City Athletics late in the 1961 season.

Fischer was a victim of some bad luck for the Athletics in 1962, going 4-12 despite a 3.95 ERA (just under the American League average). That summer, he recorded perhaps his greatest achievement by not allowing a base on balls in nearly two months of work. During that span, he pitched 84 1/3 consecutive innings without a walk, a record that still stands.

Following the 1963 season, in which he was a solid 9-6, 3.57, with 3 saves, Fischer was selected by the Minnesota Twins in the Rule V Draft. He made just 9 appearances for the Twins in 1964, his final big league season. Released by Minnesota that winter, he rejoined the White Sox. He never made it back to the majors but pitched in their chain for four summers, leading the Pacific Coast League with a 2.35 ERA in 1966.

His brothers, Gary Fischer and Thomas Fischer, played in the minor leagues.