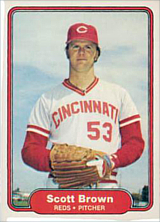 “We had this big ol’ country boy pitcher back in the early 1980s... He could really throw hard. But he didn’t have a breaking pitch. Somebody told him he needed a curveball. So he asked my dad (long-time Reds clubhouse manager Bernie Stowe), ‘Where do I get one of those curveballs?’ True story, Somebody told him to go to a sporting good store and buy them. And he did go to a sporting goods store and ask for curveballs.” We couldn’t remember his name. Not for about 15 minutes and I said, “He always wore cowboy boots and a wide leather belt with a big cowboy buckle.” But no name. Finally, his first name came to me, “Scott,” I said. And Rick Stowe jumped in with, “Brown. That’s right. Scott Brown." - Hal McCoy, Dayton Daily News, remembering Scott with Cincinnati Reds clubhouse manager Rick Stowe

Scott Brown pitched well in his only major league stint for the Reds in 1981. Scott was in 10 games with the Reds with an ERA of 2.77. He was the same age as teammate Mario Soto and twelve years younger than Tom Seaver. After the season, he was traded even-up to the Kansas City Royals for Clint Hurdle, who had injury problems but was still hitting.

In 1979, Brown led the Southern League with a 2.40 ERA. He is not to be confused with the person of the same name who was once general manager of the Binghamton Mets.