Inducted into Hall of Fame in 1992

"God is living in New York, and he's a Mets fan." - quip that made the rounds when Seaver ended up a Met and became a star

"Blind people come to the park just to listen to him pitch." - Reggie Jackson

Tom Seaver was one of the greatest pitchers of the 20th century, winning 311 games and three Cy Young Awards. He also wrote the classic book The Art of Pitching (1984).

Seaver was one of many star players to come from the University of Southern California. "Tom Terrific" began his pro career under unusual circumstances. The Atlanta Braves signed him to a Richmond Braves contract for a reported $40,000 bonus in February 1966. Commissioner William Eckert nullified the contract because the signing broke the college rule of the time. However, USC had ruled Seaver ineligible, so Eckert made Seaver available to any club other than the Braves in a special drawing if that club would match the original contract terms. The Cleveland Indians, Philadelphia Phillies, and New York Mets were willing to meet the original terms and the Mets won the drawing. New York then signed him to a Jacksonville Suns contract for a reported $50,000 bonus.

In his major league debut with the Mets on April 13, 1967, he struck out 9 opposite batters to set a franchise record for a debut. Only three days later, Bill Denehy matched that total, and the record held for 45 years, until July 26, 2012, when Matt Harvey struck out 11 opponents in his debut.

In an infamous trade, the Mets dealt Seaver to the Cincinnati Reds on June 15, 1977 for Pat Zachry, Doug Flynn, Steve Henderson, and Dan Norman. He finally did pitch a no-hitter on June 16, 1978 as a member of the Reds against the St. Louis Cardinals. He walked 3 and struck out 3 in the game. 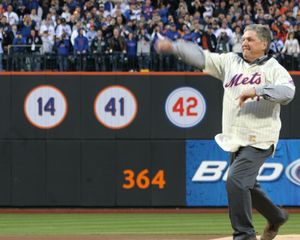 Seaver fires out a ceremonial first pitch in 2009

Seaver was one of the greatest pitchers in baseball during the 1970s. In an era dominated by pitching, fans were treated to classic pitching matchups of Seaver-Steve Carlton, Seaver-Ferguson Jenkins, Seaver-Bob Gibson and Seaver-Juan Marichal many times. With pinpoint control of his fastball and slider, Seaver dominated National League hitters for a decade and a half. His knowledge of pitching enabled him to turn to finesse when his fastball was no longer overpowering. He also used his powerful legs in his delivery, reducing strain on his arm, getting such leverage from his lower body that his right knee would touch the mound when he released the ball; yet he would immediately spring into a perfect fielding position, with both feet square and his glove in front of his body. His pitching mechanics are considered among the best ever. He recorded 200 or more strikeouts during 9 consecutive seasons from 1968 to 1976, which is an all-time record; he had one more 200 strikeouts season after that, in 1978. On April 22, 1970, he set a record by striking out ten straight batters in a game against the San Diego Padres in which he tied a National League record with 19 strikeouts; the single-game record has since been broken, but the ten consecutive striekouts have only been tied, once, by Aaron Nola in 2021. He won the Cy Young Award three times, all with the Mets, in 1969, 1973 and 1975. In 1981, he finished second behind Fernando Valenzuela when he went 14-2 for the Reds in the strike-shortened season.

Seaver returned to the Mets for the 1983 season but went to the Chicago White Sox as a free agent compensation pick in 1984; the Mets never expected that the elder Seaver would be of interest to another team and left him off their list of protected players, but they were sadly mistaken. He put in two effective seasons in Chicago, winning his 300th game at Yankee Stadium with a complete game effort on August 4, 1985.

On June 29, 1986, Chicago sent Seaver to the Boston Red Sox for Steve Lyons. Tom finished his career in Boston; he did not get a chance to face the Mets in the 1986 World Series. He retired after that season, toying with a comeback with the Mets in mid-year 1987, but retiring again before he got into a game. He finished his career with 311 career wins. He also had 3,640 strikeouts, which was the third highest total of all time at that point, behind only Nolan Ryan and Steve Carlton; others have passed him since.

Players who hit well against him (minimum 50 plate appearances):

Players who hit poorly against him (minimum 50 plate appearances):

Players with the most home runs against him:

He was elected to the Hall of Fame on January 7, 1992 by the Baseball Writers Association of America. Of all the members of the Hall until then, he came closest to election by acclamation with 425 of 430 (98.84%) possible votes (that percentage has since been bettered a number of times, including by Mariano Rivera, who did get unanimous support - see Hall of Fame Voting Percentages). He is a member of the Cincinnati Reds and New York Mets team Hall of Fames and had his #41 retired in Flushing in 1988. In April 2022, a life-size statue depicting him in full pitching motion, with his right knee almost touching the ground, was erected outside Citi Field. His first baseball card appearance was in the 1967 Topps set.

In March 2019, his family announced that he had been diagnosed with Lewy body dementia and would no longer make any public appearances. Before the announcement, he had been scheduled to be at the center of celebrations of the 50th anniversary of the Mets' 1969 World Series title. On September 2, 2020, his family announced that he had passed away from the disease and from complications from COVID-19 a few days before, on August 31st, at age 75.

To pay him tribute, all of the Mets' players all wore a smudge of dirt on their right knee in their game against the New York Yankees on September 3rd.

"Pitching is getting yourself ready. It's your game plan, it's finding out what you have to do that day. It's making your body do the things you want it to do." Tom Seaver.