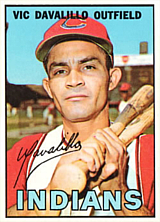 Five-foot seven-inch Vic Davalillo is the younger brother of Pompeyo "Yo-Yo" Davalillo and uncle of Marco Antonio Davalillo and David Davalillo. Vic (known as Vítico in Spanish-speaking countries) came up as a pitcher in his native Venezuela and the minors before being converted to the outfield. He broke into the majors at age 26 in 1963 with the Cleveland Indians. He won a Gold Glove in his second year in the majors, and was named to the All-Star team in his third year, when he hit .301. He played on two World Series-winning teams: the Pittsburgh Pirates of 1971 and the Oakland Athletics of 1973.

Davalillo, who played for six teams in his 16-year career, achieved some notoriety as the oldest player in baseball from 1977-1980 with the Los Angeles Dodgers, after having played from 1974 through 1977 in Mexico. Appearing often as a pinch-hitter, he hit .312 in both 1977 and 1978 as the Dodgers won the pennant each year. Vic had 23 pinch-hits in 1970, one shy of the single-season record established by Dave Philley in 1961 (sources at the time incorrectly credited Vic with 24 such hits, which would have tied the record). The mark was then broken by José Morales in 1976. Davalillo finished his career with 95 pinch-hits in the majors.

Vic was 32-27 as a minor league pitcher and was used twice as a relief pitcher by the St. Louis Cardinals in 1969 but both times he failed to get a single batter out. Late in his career, he took several more turns on the mound while playing Triple A ball in Albuquerque. In Venezuela, he had a 14-13 record with a 3.53 ERA in 15 seasons. His best season on the mound there was 1961-62, when he was 10-4 with a 2.46 ERA for the Leones del Caracas.

He was the all-time leader in batting average in Venezuela with a mark of .325. His one-two with Cesar Tovar was a great show. Vic continued to play winter ball at home until the age of 50, in the 1986-87 season. All told, he played 30 seasons in Venezuela, collecting 1,505 hits in 1,282 games. He didn't have any more power in Venezuela than in the U.S., with 34 home runs and a .411 SLG (.086 Isolated Slugging). He was part of six championship teams.