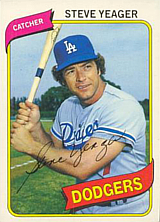 The cousin of famous test pilot Chuck Yeager, Steve Yeager played 15 years in the majors, almost all with the Los Angeles Dodgers.

Yeager was a solid backup in 1973 and split the starting job with Ferguson in 1974. That year, he caught in 24 straight victories and made the first of four World Series appearances. Ferguson was the starter in 1975 but broke his arm in a brawl and Yeager became the starter for the next five years. He led National League catchers in putouts that year with 806. In 1976, he stole home on April 30. That year, he was injured when a piece of Bill Russell's bat broke and hit him (the on-deck better) in the neck, piercing his esophagus. He had nine pieces of wood taken out of his neck in 98 minutes of surgery. Steve later invented the throat protector that hangs from every catcher's mask.

He homered 16 times in 1977, when the Dodgers returned to the World Series. He put up respectable offensive numbers, but declined significantly after 1979 and Mike Scioscia began to take over the starting job. Yeager was co-MVP of the 1981 World Series, along with Ron Cey and Pedro Guerrero; Steve hit .286 with two homers and 4 RBI. He was on six playoff teams in LA and 4 pennant winners. He batted .298 in his four World Series appearances. In 1982, Yeager injured his knee and he broke his wrist a year later, cutting down his playing time. After the 1985 season, he was traded to the Seattle Mariners in exchange for Ed Vande Berg and retired after a poor .208/.273/.269 campaign in 1986. Overall, Yeager hit .228/.298/.355 with a 83 OPS+ in 15 major league seasons, homering 102 times.

Known for a flashy lifestyle as a player, Steve got married on the steps of LA's City Hall, with Mayor Tom Bradley as his best man, and later posed naked for Playgirl. He and his family appeared on six episodes of Family Feud with Richard Dawson in 1979.

He played Cleveland Indians coach Duke Temple in the trilogy of Major League movies following his playing career. He also converted to Judaism.

Steve was a pitchman for Collectibles International, a baseball card franchise company that was accused of fraud in 1996. He is a co-owner of the Jersey Mike's Subs franchise.

In 1999, he became hitting coach of the San Bernardino Stampede. The team won the league championship, but all the coaches were released after the season. Yeager was out of baseball in 2000 before before being named manager of the fledgling Long Beach Breakers in the Western Baseball League for the 2001 season. He managed the team again in 2002 before a two year hiatus from the game. He was hitting coach for the Jacksonville Suns in 2005 and the Las Vegas 51's in 2006. Yeager was named hitting coach of the Inland Empire 66ers for 2007. In May 2007, Yeager was injured in a car accident when he swerved to avoid another car on the freeway that jumped the median and was coming at him. He returned to the independent leagues in 2008 as manager of the Long Beach Armada of the Golden Baseball League.

In 2012, Yeager returned to the major leagues as catching coach of the Dodgers, working with them until 2019. During these years he also worked as a special assignment catching instructor for the entire Dodgers organization.