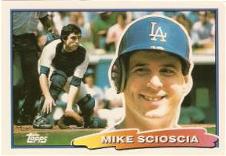 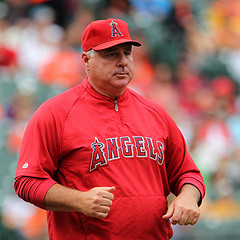 Mike Scioscia had a long major league career as a catcher and later became a successful manager.

He was signed as the first round pick in the 1976 amateur draft by the Los Angeles Dodgers and scout John O'Neil. He made his big league debut in 1980 and was the Dodgers' regular catcher for a decade. He was signed by the San Diego Padres after the 1992 season but suffered a torn rotator cuff the following year in spring training and never played for the Padres. He attempted a comeback with the Texas Rangers in 1994 but retired before making it to the majors.

After his playing career ended, Scioscia was a Los Angeles Dodgers coach in 1997 and 1998, under former teammate Bill Russell. In 1999, he managed the Albuquerque Dukes and has been manager of the Los Angeles Angels of Anaheim since 2000, leading the club to a World Series victory in 2002. He continued to lead the Angels over the following decade, returning to the postseason regularly, but failing to advance deep into the postseason, with two losses in the ALCS, in 2005 and 2009 being the best results. In 2015, rumors surfaced of a conflict with General Manager Jerry Dipoto, apparently because Dipoto wanted the organization to move to a more statistics driven approach, while Scioscia was in favor of a more traditional one. He won that struggle as Dipoto handed his resignation on July 1st.

In early August 2018, with the Angels already virtully eliminated from playoff contention, rumors began to circulate that Scioscia had already decided to retire at the end of the season. He quickly threw cold water on these rumors, saying nothing had changed and that he would address the issue of his future at the end of the season. The question remained whether he was still the best man to lead the Angels going forward in the future as he was more and more seen as a relic of the "old-school" manager relying on his instincts and gut feelings to make decisions, without the backing of statistical analysis. In any case, it turned out to be his final season, as he announced after the final game that he was stepping down.

In 2021, he was appointed the manager of Team USA for the 2020 Olympics Qualifiers that had been delayed by a year by the COVID-19 pandemic.

He was one of the slowest runners in major league baseball. As Tommy Lasorda once said: "If he raced his pregnant wife he'd finish third."

He appeared in The Simpsons episode "Homer at the Bat".

His son Matt Scioscia was drafted in the 2007 amateur draft.