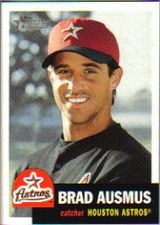 Brad Ausmus ranks 7th on the all-time list of major league catchers in games caught. A very durable and cerebral receiver, he retired at age 41 after 18 major league seasons - having appeared in over 1,900 games behind the plate. He later became a big league manager.

Ausmus was born in New Haven, CT and attended high school in Connecticut. Although he attended Dartmouth College, he never played on the baseball team because he had already been drafted and signed in 1987 by the New York Yankees. He was only a 48th round draft pick and began playing in the minors in 1988. He played six seasons on the farm, mostly in the New York Yankees organization. The Colorado Rockies took him in the expansion draft along with two other catchers - fellow future big league managers Joe Girardi and Eric Wedge. Ausmus started the 1993 season with the AAA Colorado Springs Sky Sox but was traded to the San Diego Padres on July 26th with Doug Bochtler and a player to be named later (Andy Ashby) for Bruce Hurst and Greg Harris. He made his major league debut with the Padres days after the trade.

A big favorite of former Houston Astros and Detroit Tigers General Manager "Trader Randy" Smith, who dealt for Ausmus three times, he spent two tours with Detroit. After several years with the Padres, Ausmus was traded to the Tigers and spent half of the 1996 season with them. Detroit traded him to Houston and he spent 1997 and 1998 with the Astros. Houston traded him back to Smith and the Tigers for 1999 and 2000, whereupon Smith publicly stated that he would never again trade Ausmus. After the 2000 season, the Tigers revealed that was a lie by trading him back to Houston, where he spent 2001 to 2008. Very popular among management and teammates, Ausmus was the team spokesman at the Tiger Stadium final-game closing ceremony in 2000. Ausmus was heavily used by his teams. Although a catcher, he had 400+ plate appearances each year from 1996 to 2006 and 300+ plate appearances from 1994-2007. Not typically a strong hitter, he batted .295 for the Los Angeles Dodgers in 2009 at age 40, albeit in limited playing time.

After retiring, Ausmus became a special assistant to the GM for the San Diego Padres in 2011. In 2012, Ausmus was named manager of the Israel national baseball team for the 2013 World Baseball Classic Qualifiers, held in Jupiter, FL. He said that he would build the team around current and former major leaguers of Jewish background, with players such as Shawn Green, Gabe Kapler and Josh Satin as well as prospects like Cody Decker, Nate Freiman and Joc Pederson. The team failed to qualify for the tournament, losing in the finals of its qualifier to Spain (which had even fewer authentic Spaniards than Israel had Israelis, 3 to 2). After the loss, he returned to his role with the Padres.

Following the 2013 season, Ausmus was hired by the Detroit Tigers to replace retiring manager Jim Leyland for 2014. His first season at the helm was successful, as the Tigers won the AL Central title, but they were swept by the Baltimore Orioles in the Division Series. Expectations were high for 2015 and the team got off to a hot start, but things went sour when superstar Miguel Cabrera missed a month of action due to injury. The team went into a free fall during his absence and the Tigers were sellers at the trading deadline, limping through the last two months of the season with a depleted pitching staff and falling into last place in the division, something that was inconceivable in spring training. There were also major changes in the front office, with long-time GM Dave Dombrowski being dismissed; this was bad news for Ausmus, because Dombrowski was the man who hired him and who backed him up when things had begun to sour. In early September, rumors began to circulate that he would be fired after the season, but on September 26th, new GM Al Avila confirmed he would be back in 2016. The Tigers had a better season, winning 86 games that year, but after hanging around the top of the AL Central for the first four months, they were badly distanced by the Cleveland Indians down the stretch and missed the postseason altogether. Everything fell apart in 2017 as the team never got going, then began to shed payroll as the season advanced, trading away outfielders J.D. Martinez and Justin Upton and long-time ace Justin Verlander during the year. It made for a very tough final two months and once again, rumors about Ausmus's future began to circulate. On September 22nd, the Tigers made an announcement that Ausmus would not return in 2018.

Following his dismissal by the Tigers, Ausmus took a job as a special assistant to Los Angeles Angels General Manager Billy Eppler. Following the 2018 season, he was named the team's manager for 2019, succeeding long-time skipper Mike Scioscia. He was fired the day after his first season so that the Halos could snare Joe Maddon, who had been relieved of his post skippering the Chicago Cubs. In 2022, he was named bench coach of the Oakland Athletics under new manager Mark Kotsay.