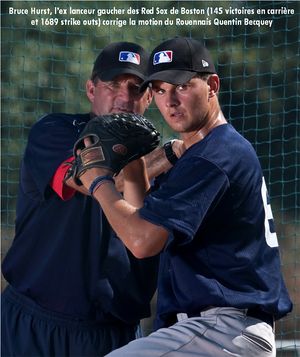 Hurst and Quentin Becquey at the 2009 MLB Academy in Italy

While pitching for the 1981 Pawtucket Red Sox, Bruce Hurst appeared in the longest game in baseball history, pitching 5 shutout innings (allowing 2 hits) as the 7th PawSox hurler. He was relieved by Bob Ojeda.

Hurst was signed by the Boston Red Sox and scout Don Lee as a 1st round pick in the 1976 amateur draft. He made his major league debut with the Red Sox in 1980 and pitched with the team until 1988. He then had a few more successful seasons with the San Diego Padres before age and injuries caught up with him. When he came up, it was widely assumed that a left-handed starter could not find success in Fenway Park because of the Green Monster and the advantage it gave to right-handed batters (even though Bill Lee had found success only a few years earlier as a lefty in Fenway). Hurst overcame that skepticism and won over 10 games every year between 1983 and 1988, with a career-high 18 wins in 1988. In 1983, the Red Sox actually had three solid left-handers in their starting rotation, with John Tudor and Bob Ojeda joining Hurst.

Hurst pitched a combined shutout with Calvin Schiraldi in Game 1 of the 1986 World Series against the New York Mets. He then followed that with a complete game victory in Game 5 which gave the Red Sox a 3 games to 2 lead over the Mets. He was about to be announced as the MVP of the World Series when the Mets staged their improbable comeback while trailing by two runs with the bases empty and two outs in the bottom of the 10th inning of Game 6; the Mets went on to win the game and the Series, and Ray Knight was named MVP instead of Hurst.

He threw a fastball, forkball, slider and curveball.

In 1999, he was manager of the Zion Pioneerzz of the Western Baseball League. He was the pitching coach for the Chinese national team during the 2003 Asian Championship, 2006 World Baseball Classic, 2013 World Baseball Classic and 2015 Asian Championship. In 2009, Hurst was involved in the MLB European Academy in Italy, to evaluate young European players for potential MLB contracts.

His son, Kyle Hurst, was drafted in the 2008 amateur draft. Dixie State College in his hometown of St. George, UT plays its home games at Bruce Hurst Field