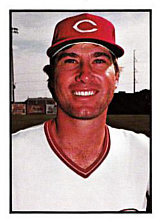 Ray Knight played thirteen years in the majors and also managed for parts of three seasons.

Knight was a tenth round pick of the Cincinnati Reds in the 1970 amateur draft and first came to the majors with the club in 1974 at age 21. He was not up with the Reds during the great Big Red Machine years of 1975 and 1976 but was a frequently used backup the next two seasons. Knight was highly touted as the replacement for third baseman Pete Rose, which was a hard role to play. Rose, who had hit .302 with 103 runs scored while playing third base for the Reds in 1978, moved to the Philadelphia Phillies as a free agent in 1979, where he hit .331. Knight, meanwhile, hit .318 with 37 doubles for the 1979 Reds, who won a division title while the Phillies finished out of the postseason. He was an All-Star in 1980, but his offensive production slipped and he was traded to the Houston Astros for Cesar Cedeno after the 1981 season.

Knight became a free agent following the 1986 season, and expecting a bigger payday as a result of his postseason heroics, turned down the Mets' offer. He moved to the Baltimore Orioles in 1987 and the Detroit Tigers in 1988 for his last two major league seasons. He ended up with 1,495 major league games played, of which 1,021 were at third base and 339 were at first base. He never led the majors in any key offensive statistic, coming closest in 1979 when his .318 average was third in the National League.

Knight came back to the Reds as a member of their coaching staff from 1993 to 1995 and was their manager in 1996 and 1997. He rejoined the club as a coach in 2002 and 2003 and as interim manager for one game in the latter season. He has also been a broadcaster for ESPN and from 2007 to 2018 worked on MASN's broadcasts of Washington Nationals games. On October 22, 2017, he was arrested in Alexandria, VA on suspicion of assault and battery stemming from an early-morning violent dispute with another man. He was booked on a single misdemeanor count but the case was dropped by prosecutors in early January 2018.

During his career, Knight received attention as the spouse of professional golfer Nancy Lopez.

A member of the Golden Gloves boxing association, Knight's punch to the jaw of Cincinnati's Eric Davis, triggering a mammoth Reds/Mets brawl in 1986, impressed a young boxer named Mike Tyson, who would meet Knight later that season.