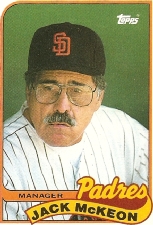 Jack McKeon was a catcher in the Pittsburgh Pirates organization, beginning in 1949. He debuted with the Greenville Pirates, hitting .251 with 49 RBI. In 1950, McKeon hit .333 in a brief sample with the York White Roses but spent almost all of the year with the Gloversville-Johnstown Glovers, earning $225 per month. He only hit .215/~.284/.239 in 72 games. He was hit in the head by one pitch and needed stitches and also badly injured his knee at second base. McKeon almost lost his life that year. After his knee injury, he was ordered home to recuperate and missed the Friday train the team wanted him to take. The train arrived two minutes before an explosion claimed 33 lives.

In 1951, Jack was in the military and was player-manager for the Sampson Air Force Base team, which won the Air Force championship. The next year, he returned to pro baseball and batted .218/~.352/.285 for the Hutchinson Elks and showed improved walk ability and defense (.987 fielding) from his 1950 season.

He managed the Omaha Royals for four years, before taking over the Kansas City Royals. He piloted the Richmond Braves in 1976. McKeon began 1977 as the Oakland A's manager, but was replaced by Bobby Winkles in June, then replaced Winkles in May of 1978. 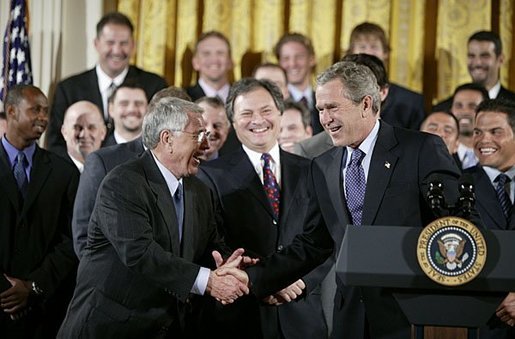 McKeon managed the Cincinnati Reds from mid-1997 to 2000, then took over the Florida Marlins in 2003. He became the oldest manager (72) to win a World Series when his Marlins won the championship in 2003. He resigned as the club's manager after the 2005 season.

His name came up as a potential replacement as soon as Marlins manager Edwin Rodriguez announced his resignation on June 19, 2011 with the team in a 1-17 tailspin. At 80, McKeon became the second-oldest manager in in major league history, after Connie Mack, who was 88 when he managed his last game. He was expected to finish out the season, with a new manager to take over in 2012 when the Marlins moved to a new ballpark. "I'll probably manage until I'm 95," he quipped after his return to the dugout, His first move was to bench star SS Hanley Ramirez, who had infuriated previous managers with his sometimes lackadaisical play, because "(I) didn't like the way he was running yesterday." The Marlins were losers in his first game, 2-1 to the Los Angeles Angels of Anaheim on June 20th for their franchise-record 11th straight loss, and their 19th in their last 20 games. He won for the first time the next night, 5-2 over the Angels as Ramirez was back in the line-up. As expected, on September 26th, he announced he would not be returning the following season; his announcement preceded by a few hours the appointment of Ozzie Guillen as manager of the renamed Miami Marlins for the following year. He retired with 281 wins as manager of the Marlins, which was the most in franchise history until he was passed by Don Mattingly in August 2020.

In January 2019, he was still active at the age of 88 as he was hired by the Washington Nationals to serve as a senior adviser to GM Mike Rizzo.

His brother, Bill McKeon, was a minor league catcher in the Milwaukee Braves system, and his son, Kasey McKeon, is a former minor league player and served as an executive with the Colorado Rockies and the Nationals. Another son, Kelly McKeon, was a scout. He is also the Father-In-Law of Greg Booker and grandfather of Zach Booker an d Avery Booker.

On June 8, 1977, McKeon's A's defeated Frank Robinson's Cleveland Indians. It was McKeon's last game as the A's manager, while Robinson lasted only ten more days with the Indians. Nearly 26 years passed before the two men next opposed each other as managers: this is a major league record. That next encounter was on May 20, 2003, when Robinson's Montreal Expos began a sweep of McKeon's Florida Marlins.