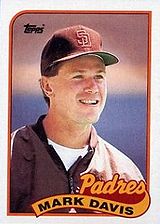 Left-handed pitcher Mark Davis burst into prominence in 1980 with an outstanding season with the Reading Phillies of the AA Eastern League. He earned the league's MVP award with a record of 19-6 with a 2.47 ERA, and made his major league debut as a September call-up for the parent Philadelphia Phillies. However, he failed to develop in spite of numerous opportunities at the Major League level, and in frustration, his managers kept shuffling him between the bullpen and the starting rotation. This included a season when he led the National League in losses and earned runs allowed while posting an ugly 5-17 mark for the San Francisco Giants in 1984, but his other seasons weren't much better.

He had his first real success in 1988, when Padres' manager Larry Bowa, a former teammate with the Phillies, made him the team's closer. He saved 28 games that year, with a 2.01 ERA, and then he did even better in 1989, saving 44 games (a Padres record, later broken by Trevor Hoffman) with an ERA of 1.98. This earned him the NL Cy Young Award, and a huge contract from the Kansas City Royals when he hit the free agent market after the season. He was an unmitigated bust with the Royals, however, only saving 6 games before losing the closer's job in 1990, and finishing the year with an ungodly 5.11 ERA as his control completely deserted him. He was not able to recapture his form over the following seasons, and even a return to San Diego in 1994 failed to right things for him. He attempted a comeback in 1997 with the Milwaukee Brewers, but posted an ERA of 5.51 over 19 games. Overall, his won-loss record of 51-84 for his career is one of the worst ever for a Cy Young Award winner.

After retiring as a player, Davis joined the Arizona Diamondbacks coaching staff. He served for several years as a coach in their minor league organization before being promoted to the majors. These stops included serving as the pitching coach for the 2000 AZL Diamondbacks, the 2001 Missoula Osprey, and 2002 El Paso Diablos. In 2003 he ascended to the major leagues as the Diamondback's bullpen coach. The next season he was promoted to pitching coach on July 2nd when manager Bob Brenly and pitching coach Chuck Kniffin were fired. He remained in this job through the 2005 season.

In 1989, he set a record by saving a game on each of five consecutive days: he was the first to do this since the save statistic became official. This record has since been tied by Rod Beck (1998), Steve Kline (2000) and Francisco Cordero (2007).