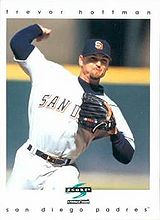 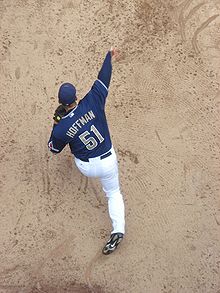 Trevor Hoffman became the leader on the all-time saves list beginning in 2006; he retired after the 2010 season with 601 to his credit, then was passed by Mariano Rivera in 2011. 552 of his saves were recorded with the San Diego Padres. He was also the all-time leader in games finished, with 856, until passed by Rivera as well.

Hoffman's success ws based on an outstanding change-up that was virtually indistinguishable from his fastball out of his hand, allowing him to continue keeping hitters off balance even though his fastball lost considerable velocity starting in the mid-1990s.

He began his career as an infielder in the minors after being drafted by the Cincinnati Reds in the 11th round of the 1989 amateur draft. He began to show promise when the Reds converted him to the mound in 1991, and acting on that promise, the Florida Marlins selected him with the 8th pick of the 1992 expansion draft. Having never pitched above AA, he made the Marlins' staff out of spring training in 1993, and never returned to the minor leagues after that, except for a rehabilitation stint in 2003. In the middle of his rookie season, he was included in a blockbuster trade that landed the Marlins 3B Gary Sheffield on June 24. He had recorded 2 saves for the Marlins, and would add three more for the Padres in late 1993, before becoming the team's closer in 1994, when he recorded 20 saves. Spanning over the 1997 and 1998 seasons, he recorded 41 consecutive saves, the longest such streak in franchise history until tied by Heath Bell in 2011; both Hoffman and Bell were charged with a blown save when attempting to extend the streak to 42 saves. Hoffman was part of the Padres' World Series team in 1998, but was charged with a loss in his only appearance in the Fall Classic, in which the Pads were swept in four games by the New York Yankees.

On September 24, 2006, he got a save against the Pittsburgh Pirates to surpass Lee Smith as the all-time save king. He then kept piling on the saves, keeping ahead of the second-place man on the list, Mariano Rivera and being the first pitcher to top both 500 and 600 saves. That surge came after missing almost all of the 2003 season after undergoing two shoulder surgeries. After pitching in only 9 games and not recording a single save that year, he was back in top form in 2004, saving 41 games with a 2.30 ERA.

On April 28, 2007, Hoffman broke the record for most games pitched for one team, held by Walter Johnson and Elroy Face, when he appeared in his 803rd game for the Padres. Hoffman ultimately appeared in 902 games for the Padres - before signing with the Milwaukee Brewers for the 2009 season - 100 more games than the previous record. That season, he also became the first pitcher in major league history to record 500 saves. However, the year ended on a sour note for him, as he blew two crucial save opportunities in the season's last three days; had he been successful in either, the Padres would have clinched the National League wild card. Instead, he gave up a two-strike, game-tying triple to Tony Gwynn Jr. of the Brewers with two outs in the bottom of the ninth inning on September 29, then in the one-game playoff against the Colorado Rockies on October 1, he came in at the top of the 13th inning with an 8-6 lead, and proceeded to give up two doubles, a triple, an intentional walk and a sacrifice fly to Jamey Carroll to hand the postseason spot to the Rockies. Hoffman had arthroscopic surgery after the season to remove some bone chips from his right elbow. He was expected to be back by the beginning of 2008, and indeed saved another 30 games for the last-place Padres that year. 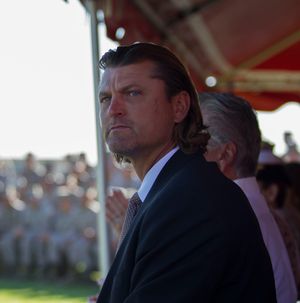 He is the Padres single season and career saves leader. He is also the career leader in games pitched and ERA. After the 2008 season, he left the Padres to join the Milwaukee Brewers, where he was immediately installed as the closer for the 2009 season. His steady presence in this key role was a factor in the Brewers overcoming serious problems with their starting pitchers to stay on top of the NL Central race in the season's first half before fading away after the All-Star Game, to which he was selected. He picked up 37 saves for his new team in 2009, with an ERA of 1.83.

On September 7, 2010, he became the first pitcher to reach 600 saves, getting the nod in a 4 - 2 win over the St. Louis Cardinals. It came at the end of a difficult season, during which he was roughed up repeatedly in the early going, giving up a slew of homers, was relegated to the back end of the bullpen, and eventually got a few opportunities to save games late in the season, after John Axford had claimed the Brewers' closer job, and after he had pitched more effectively in non-pressure situations. He got one final save before the end of the year, finishing with 601.

On January 11, 2011, seeing little interest in his services for the next season, he announced his retirement at age 43. His major league save record was threatened in the short term by Rivera, who was only 42 saves behind him when he retired, but his National League record appears safe for a long time. Indeed, Rivera passed him on the all-time save list on September 19th of that same year. In an interview the day after he announced his retirement, Hoffman stated that, in his view, 300 saves was equivalent to 300 wins or 3000 hits, i.e. a level of achievement so lofty that reaching it should almost guarantee a player's election to the Hall of Fame: "The 300 (save) mark hasn't been done by a lot of people. The role (of closer) probably isn't going to get tweaked much more so 300 probably is a good number." While this view is not generally shared, Hoffman was a very strong candidate to be voted to the Hall when he became eligible in 2016, even if voters were still establishing the standards by which relief pitchers are judged in Hall of Fame elections. In that ballot, he received 67.3% of the vote, an excellent start that put him second among first-year candidates, behind Ken Griffey, Jr., who received a record-high percentage of votes. That strong start made his eventual election extremely likely.

Following his retirement, Hoffman indicated he would accept a job in the Padres front office that would include his being in uniform for spring training, his exact title being special assistant General Manager and upper level pitching coordinator, i.e. working with the most promising arms making their way up the Padres' minor league ladder. On August 21, 2011, the Padres retired his uniform number 51 in a pregame ceremony. In 2014, Major League Baseball paid him tribute by naming its new award to be given to the best reliever in the National League the "Trevor Hoffman Award", with Trevor one of 9 former relievers who get to choose the award's winner. He was elected to the San Diego Padres' Hall of Fame in 2014, only the 9th person and 5th player to receive the honor. In his first year of eligibility for the Hall of Fame in 2016, he received 67.3% of the vote, putting him in excellent position to be elected within a couple of years. He barely missed election in 2017, falling 5 votes short. He made it the following year, 2018, with 79.9% of the vote.

He is the brother of Glenn Hoffman. His son SS Quinn Hoffman was a 36th round choice out of high school in 2016 but chose to attend Harvard University instead of signing. Another son, Wyatt, was also a very good high school player and went on to Pacific University. Glenn's son Dylan Hoffman, a pitcher, was a 39th round draft choice in 2019. He coached for the Great Britain national team in the 2017 World Baseball Classic Qualifiers.

In 2018, in honor of Hoffman's election to the Hall of Fame, the city of San Diego, CA renamed one of the streets on which Petco Park is located "Trevor Hoffman Way". The ballpark is located at its intersection with Tony Gwynn Drive, named after long-time teammate and Padres icon Tony Gwynn.