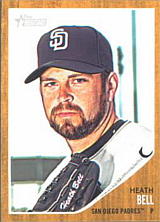 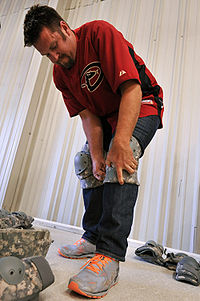 From May 29, 2010 to May 3, 2011, Heath Bell successfully converted 41 consecutive save opportunities, tying a San Diego Padres franchise record held by Trevor Hoffman. In his next opportunity, against the Arizona Diamondbacks on May 6th, he was victimized by a throwing error by third baseman Chase Headley with two outs in the 9th, leading to two unearned runs and a blown save. Hoffman had set his record over the 1997 and 1998 seasons.

Heath was originally property of the New York Mets, signing in 1998 and reaching the big leagues in 2004. He spent a lot of time on the shuttle back and forth from the big league club, never establishing a firm grasp on a spot in the bullpen. At the end of the 2006 season, he was dealt to San Diego and gradually became the team's setup man, providing the bridge for Trevor Hoffman to come in and close the door. Bell ascended to the closer's throne when the Hall of Famer moved on to the Milwaukee Brewers in 2009. In the middle of his third season as the Padres' closer, Bell was claimed on waivers by the San Francisco Giants on August 24, 2011, with Giants closer Brian Wilson on the disabled list, but the two teams were not able to work out trade terms for the All-Star reliever and he finished the year in San Diego, picking up 43 saves. After the season, he became a free agent and signed a three-year deal with the Miami Marlins starting in 2012.

Bell had an awful first month for the Marlins in 2012. In 8 games, he posted a 10.80 ERA with an 0-3 record, although he did record 2 saves. He gave up 10 hits and 8 walks in 6 2/3 innings and looked completely out of sorts, rarely getting opposing batters to swing and miss at his pitches. On May 4th, he suffered his 4th blown save of the year, forcing manager Ozzie Guillen to demote him in order to allow him to work out his kinks in less pressure-filled circumstances. He continued to struggle even after regaining the closer’s role. On May 25th, he entered a game against the San Francisco Giants with a three-run lead in the 9th inning, but had to be removed in favor of Steve Cishek after giving up a pair of runs. The next day, with another three-run lead in the 9th, he managed to record only one out before he loaded the bases and was once again pulled from the game. He did turn things around somewhat during the later part of the season, but the whole experience left a very bitter taste in his mouth. In September, he told a local radio station: "It's been an interesting year with Ozzie. That's pretty much all I'll say about that. It's just been really interesting to have him as a manager." The comments came at a time when the colorful Guillén was also feuding with team owner Jeffrey Loria amid speculation that his contract would be terminated early. For his part, Guillén stated that he did not respect Bell as a person: "It was my turn this week. Last week it was the pitching coach. The week before it was his teammates. Every week it's something. That's why I don't respect him as a person. You have to have principles." Bell said that his earlier comments had been taken out of context and that he planned to stop doing interviews with the news media as a result. He finished the season with a record of 4-5, 5.09 in 73 games and only 19 saves. On October 20th, he was traded to the Arizona Diamondbacks in return for minor leaguer Yordy Cabrera, ending a short but stormy tenure in Miami.

In spite of his struggles the previous season, Heath pitched for Team USA in the 2013 World Baseball Classic. He did well, picking up a crucial win in relief against Team Canada on March 10th, and then pitching a key scoreless inning against Puerto Rico in the game that eventually eliminated the United States from the tournament on March 15th. He did somewhat better with the D-Backs in 2013 than he had done in Miami the previous season, as he recorded 15 saves with a record of 5-2, 4.11 in 69 games. He had an excellent K/BB ratio at 72/16 in 65 2/3 innings, but did give up 12 homers. Showing he still had some value, he was traded again after the season, moving to the Tampa Bay Rays on December 3rd in return for prospect Justin Choate. However, he went 1-1, 7.27 in 13 games for the Rays early in 2014 and was released on May 10th. He signed a minor league contract with the Baltimore Orioles a few days later. He did not make it back to the big leagues, making only 10 appearances with the Norfolk Tides before being released again on June 10th. The New York Yankees were next to give him a shot in the minors, with the Scranton/Wilkes-Barre RailRiders, but he put up a 7.50 ERA in 5 games and was released yet again on June 24th. After sitting out the remainder of the season, he signed a minor league deal with the Washington Nationals coupled with an invitation to spring training in 2015. When he was released on March 23rd, he announced his retirement.

He became eligible for the Hall of Fame in its 2020 election but did not receive a single vote and was dropped from the ballot. Bell is the cousin of Drake Bell, the actor that starred on Nickelodeon's Drake & Josh.