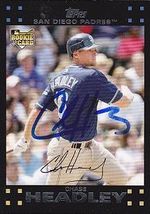 Headley had a breakout season in 2012. He was the National League Player of the Month for August when he hit .306 while leading the majors with 31 RBI and tying for first with 10 homers. He also scored 20 runs during the month and slugged .611. He repeated as Player of the Month in September, when he hit .324, slugged, .647, hit 9 homers and collected 30 RBI. He finished the season with a NL-leading 115 RBI, to go along with 31 doubles and as many homers in 161 games. He also had an outstanding season with the leather, winning the NL Gold Glove Award at third base that year. His OPS+ was an outstanding 145 and he finished 5th in the voting for the 2012 National League Most Valuable Player Award.

After his breakout season, Headley filed for salary arbitration heading into the 2013 season, but was able to reach a deal with the Padres before the hearing. The two sides agreed on a salary of $8.575 million for one year, a raise of more than $5 million. On March 17th, however, he broke his thumb sliding into second base in a spring training game and as a result was forced to miss the start of the season. The injury ushered in a fall back to earth for Headley, as his production fell to be more in line his previous years' norms: in 141 games, he hit .250 with 35 doubles, 13 homers and 50 RBIs. This was still good for an OPS+ of 115 in the tough hitting environment of PETCO Park. In 2014, Headley was bothered in the early season by a herniated disk in his back which sapped his power. He improved after receiving an epidural injection in late June, but was still only hitting .229 with 7 homers and 32 RBIs in 77 games when he was traded to the New York Yankees on July 22nd in return for IF Yangervis Solarte and P Rafael De Paula. With 3B Alex Rodriguez suspended for the season, the Yankees had struggled to find a replacement at the hot corner, after rookie Solarte had cooled down following a strong start. Kelly Johnson and another rookie, Zelous Wheeler had shared the position in recent weeks, but without providing much production. Headley immediately headed to New York after the trade was announced and made it in time to enter that night's game in the 9th inning; he proved to be the hero in the 14th when he drove in Brian Roberts with the winning run in a 4-2 win over the Texas Rangers. He ended up doing quite well with the Yankees, as he hit .262 with 6 homers and 17 RBIs in 58 games, putting up an OPS+ of 119, in addition to playing well on defence. The Yankees were quite pleased and on December 15th re-signed him to a four-year contract worth $52 million, clearly indicating that he was considered the team's third baseman of the future, with the man he replaced, A-Rod, having to earn his keep as a DH.

Headley then spent three full seasons as a starter for the Yankees, from 2015 to 2017. He was almost exclusively a third baseman the first two years, then moved over to first base in mid-season in 2017 after the Yankees had acquired 3B Todd Frazier in a trade. He did not do as well then in his first half-season in the Bronx, with an OPS+ of 90 and 91 in 2015 and 2016, with 11 and 14 homers, and 62 and 51 RBIs. In 2017, as the Yankees experienced a resurgence thanks to an influx of young players, he improved to .273 with 12 homers and 61 RBIs. He got his first taste of the postseason in 2015 when he was 0-for-2 with a walk when the Yankees were shut out by the Houston Astros in the Wild Card Game. In 2017, he went 0 for 12 in the Division Series against the Cleveland Indians, and then hit .389 (7 for 18) as the Yanks lost to the Astros in the ALCS. He was the team's primary DH in both series, as Greg Bird had taken over the first base job. After the season, on December 12th, he was traded back to San Diego along with P Bryan Mitchell in return for OF Jabari Blash. The trade came one day after New York had acquired superstar slugger Giancarlo Stanton in a trade, and was meant to slash some payroll to compensate for Stanton's huge contract.

Headley was expected to start at third base for the young Padres in 2018, but he quickly lost his job when rookie Christian Villanueva had a three-homer game in his first start at the position and went on to win Rookie of the Month honors in the National League. With the Padres having singed 1B Eric Hosmer to a large contract in the off-season, there was little or no playing time left for Headley, and he did not do much to prove his value when he did get to play, as he was hitting just .115 in 27 games and 52 at-bats on May 12th, the day the Padres had him designated for assignment. No other team was willing to give him a look and he retired.