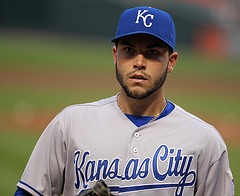 Eric Hosmer made it to AA in 2010 and to the majors the next season.

Hosmer hit .470 as a high school senior. Baseball America rated him as being the prep player closest to the majors prior to the 2008 amateur draft. The Kansas City Royals chose him third overall in that draft, after Tim Beckham and Pedro Alvarez. Hosmer signed with scout Alex Mesa for a $6 million bonus.

He made his pro debut with the 2008 Idaho Falls Chukars, going 4 for 11 with three walks and two doubles. Baseball America rated him as the #2 Royals prospect and #24 in all of baseball going into 2009. He split that year between the Burlington Bees (.254/.354/.382 in 79 G) and Wilmington Blue Rocks (.206/.280/.299 in 27 G). The much-hyped high school slugger delivered only six long balls between the two stops. Baseball America still rated him as the #12 Midwest League prospect and #5 in the Royals chain. 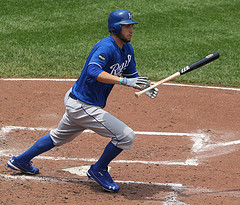 Eric opened 2010 with the Blue Rocks and looked much sharper than in 2009, hitting .354/.429/.545 with 29 doubles in 87 games. That earned him a promotion to AA and a spot on the USA roster for the 2010 Futures Game. He played DH that game for the US, hitting 5th between Domonic Brown and Hank Conger. He had a great game but lost the MVP to Conger. His first trip up, facing Simon Castro, Hosmer singled in Dee Gordon to put the USA ahead 2-0. In the 3rd, he singled off Alexander Torres. In the 5th, a Hosmer single against Henderson Alvarez preceded Conger's 3-run homer. He flew out versus Trystan Magnuson in the 6th, his lone out of the game. Hosmer came back in the 8th with a RBI double off Jeurys Familia to plate Gorkys Hernandez. He then scored on a two-bagger by Austin Romine. Between Wilmington and Northwest Arkansas, he hit .338/.406/.571 in 137 games, banging out 43 doubles, 9 triples and 20 home runs. He as named Baseball America's 8th best prospect in all of baseball after the season.

Hosmer started the 2011 season with the Omaha Storm Chasers of the Pacific Coast League. He tore the cover off the ball for a month, at a pace of .439/.525/.582, to earn a call-up to the majors. He had obviously been ready earlier, but the Royals wanted to delay his arbitration clock by a year. He made his debut in the majors on May 6th against the Oakland A's, going 0 for 2 with 2 strikeouts, 2 walks and a stolen base. He picked up his first hit the next day, adding another walk as well. He hit his first major league home run at New Yankee Stadium on May 11th, off A.J. Burnett, then topped off that game with a game-winning sacrifice fly in the 11th inning in the Royals' 4-3 win over the New York Yankees. He did not have to wait long for his second homer, as it came in his first at-bat of the next day's game, off Ivan Nova. Hosmer was named the American League's Rookie of the month for July, after banging out 34 hits, including 9 doubles and 5 home runs, and collecting 19 RBI during the month. Hosmer had his first multiple homer game on August 31st, hitting a pair of solo homers off the Detroit Tigers' Rick Porcello at Comerica Park. He repeated as Rookie of the Month in September, when he had 37 hits, scored 21 runs and drove in 19, and slugged .557; he had a five-hit game against the Tigers on September 20. He finished the year with a .293 average, 27 doubles, 19 homers and 78 RBI, one of a number of young players having fine seasons for the Royals.

In 2012, he played a full season of 152 games with the Royals. There was a regression in his production, however, as his average fell to .232, and his extra-base totals to 22 doubles and 14 homers in considerably more at-bats than in his rookie year. He also had fewer runs scored (65 against 66 in 2011) and RBI (60 against 78). Only his performance on the basepaths improved, as he was successful in 16 out of 17 stolen base attempts. Still, the Royals were not particularly concerned with the fall in his numbers. Hosmer then was a last-minute addition to Team USA for the 2013 World Baseball Classic, replacing the injured Mark Teixeira. The nod was a bit of a surprise, considering his less-than-stellar performance the previous year; however, the timing of Teixeira's injury left manager Joe Torre with no first baseman on his roster, and few viable options to call upon in major league camps. He played 159 games for the Royals in 2013 and hit .302 with 17 homers and 79 RBIs. He also won a Gold Glove for his defensive play, securing his position among the best first basemen in the game.

In 2014, he repeated as a Gold Glove winner but his offensive numbers went down as he hit .270 with 9 homers and 58 RBIs during the regular season, his OPS+ falling to 99. However, that was all forgotten as the Royals made the postseason for the first time since winning the 1985 World Series, and then went on a miraculous run that took them all the way to Game 7 of the 2014 World Series, when they finally bowed to the San Francisco Giants and to a superhuman performance by Madison Bumgarner. Hosmer was one of the Royals' best players during that run going 3-for-4 with a triple and a pair of walks as Kansas City eliminated the Oakland Athletics in an epic Wild Card Game, then hit .400 in both the ALDS and ALCS, both series ending in sweeps. In the World Series, he had 7 hits in 28 at-bats (.250) with a pair of doubles and 4 RBIs.

In 2015, the Royals completed their unfinished business from the year before, winning their first World Series in three decades by defeating the New York Mets in the Fall Classic. Hosmer's production bounced back during the season, as he hit .297 with 18 homers and 93 RBIs in 158 games, also scoring 98 runs. He continued to shine on defence as well, winning his third straight Gold Glove. He then contributed a number of clutch hits during the successful postseason run, totaling 17 RBIs in 16 games. Now a household name, he played in his first All-Star Game in 2016 and even ended up the winner of the Ted Williams Award as the game's MVP. While his average fell to .266 in 158 games, his power numbers were the best of his career, with 25 homers and 104 RBIs, both career highs. The Royals missed the postseason however, and heading into 2017, it looked like the team's magical run was coming to an end, especially since they started the year playing awfully and unable to score runs. But the Royals turned things around beginning in May and by the All-Star break were back in the postseason race. For his part Hosmer was again one of the offensive leaders, hitting for both average and power. On July 26th, he had a career game in a 16-2 demolition of the Detroit Tigers, matching a personal best with 5 hits, including his first career grand slam on his 118th career homer. The blast came off Warwick Saupold in the 7th inning and was part of a day on which he scored four runs and drove in six. He played all 162 games that year, hitting a career-best .318 with an OBP of .385 and a slugging percentage of .498, thanks to 31 doubles and 25 homers. He scored 98 runs and drove in 94. This resulted in his being granted the Silver Slugger Award for the first time, and he won his fourth Gold Glove on top of that. So, even if the Royals' mid-season surge failed to result in a return to the postseason, it was through no fault of his.

Hosmer became a free agent following the 2017 season and while it was expected that some of the big spenders in the majors would be bidding for his services, the most serious offers came from two less expected corners, with the San Diego Padres and the Royals both offering multi-year deals in the $140 million range. It took a long time for the deal to be finalized, however, as Hosmer's side insisted on a deal for eight years while the two teams only wanted to commit for seven seasons. It took until February 17, 2018 for an agreement to be reached with the Friars giving in for an eighth season, for a total value of $144 million. It was both the largest deal of the off-season, and the largest in Padres history. The signing also meant that incumbent 1B Wil Myers would move back to the outfield. Hosmer announced that in San Diego, he would wear uniform number 30 in honor of late teammate Yordano Ventura, who had been tragically killed in a car crash a year earlier. In his first year with the Padres, he hit .253 with 18 homers and 69 RBIs in 157 games, then followed that in 2019 with another mediocre season, hitting .265 with 22 homers and 99 RBIs. He actually had a higher OPS+ the first year, 100 as compared to 93, but the Padres were a much-improved offensive team the second year, leading to many more RBIs. They were still not a contender, though, although most observers expected that to happen in 2020, as the addition of Manny Machado and Fernando Tatis Jr. in 2019, complemented by the addition of Tommy Pham gave them a solid offensive core to go with an improving young pitching staff. When the 2020 season finally opened on July 24th, Hosmer had one of his best games in a Padres uniform, twice hitting bases-loaded doubles to drive in 6 runs in a 7-2 win over the Arizona Diamondbacks. The Padres were having an excellent season, as was Hosmer, who was hitting .288 with 8 homers and 32 RBIs, good for an OPS+ of 140, after 31 games. That's when on September 7th, he broke a finger while attempting a bunt in the 1st inning of a game against the Colorado Rockies, an injury that cost him two weeks. He returned on September 19th and finished the season at .287 with 9 homers and 36 RBIs, his OPS+ reaching a sparkling 134. The Padres made the postseason, but he went only 4 for 25 over the two series the team played, with one homer and 4 RBIs.

In 2021, with the Padres determined to give the Los Angeles Dodgers a run for their money in the competition for the division title, he started off very hot. In his first two games, both Padres win, he accumulated 13 total bases, a team record.