The 2013 Kansas City Royals made a push for contention in the off-season, trading the 2012 Minor League Player of the Year, OF Wil Myers, to the Tampa Bay Rays in return for pitchers James Shields and Wade Davis. They also signed another veteran starter in Ervin Santana, giving them on paper their strongest starting rotation in years to go along with a solid bullpen, and a roster full of up-and-coming position players. The team got off to a very good start, starting the season 17-10, which seemed to justify management's decision to go for broke after years of building for a future that was always just around the corner. Things degenerated quickly, however, as the Royals went on an ugly 4-17 skein in May, bringing them back into familiar sub-.500 territory, with rumors swirling that veteran manager Ned Yost was on the hot seat. The source of the problem was a lack of hitting - the new pitchers had in general performed as well as expected - and the team made a move on May 30th, bringing in team Vice-President, Hall of Famer George Brett, as an interim hitting coach; he replaced Jack Maloof, while assistant hitting coach Andre David was also replaced, by Pedro Grifol, while the two incumbents were reassigned to the team's minor league operations. 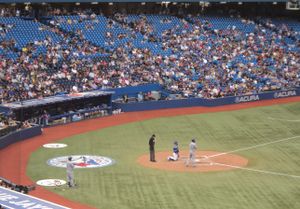 The Royals played very well after the All-Star Game, at which they had three representatives, something unheard of for a Royals team in decades, going 10-2 over their first 12 games, including an 8-game winning streak. It was their longest winning streak since opening the 2003 season with 9 straight wins. They were 53-51 at the end of the day on July 31st, the first time they had been over .500 this late since 2003 as well, giving them an outside shot at the postseason, although the Detroit Tigers and Cleveland Indians were still ahead of them in the AL Central. They continued their winning ways in August, concluding an 8-1 road trip on August 4th with a 6-2 win over the New York Mets; it was the most successful road trip in franchise history and their only loss had come in extra innings against the Mets on August 2nd. When they won a game 6-2 over the Miami Marlins on August 12th, it was their 17th win in their last 20. However, with the Tigers still red hot, they had not managed to gain much ground in the AL Central or in their quest for a postseason slot. On August 16th, however, they swept a doubleheader from the Tigers. Coming back from elbow surgery, Danny Duffy took a no-hitter into the 6th inning to defeat Justin Verlander, 2-1 in the opener, while Shields, Luke Hochevar and Greg Holland combined on a 3-0 shutout in the nitecap. They were now 7 games over .500 and had moved within a half-game of the second-place Indians, 6 1/2 of the first-place Tigers, and 5 from a wild card slot.