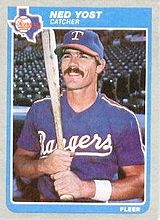 Former big league catcher Ned Yost is best known by most baseball fans as the long-time manager of the Milwaukee Brewers and of the Kansas City Royals, a team he led to victory in the 2015 World Series.

Yost began his pro career after being drafted by the New York Mets in 1974. He was acquired by the Brewers after the 1977 season in the 1977 Rule V Draft. After playing in the majors for the Brew Crew from 1980 to 1983 (and playing in the 1982 World Series), he was traded along with Dan Scarpetta to the Texas Rangers for Jim Sundberg on December 8, 1983. he was never a starter in Milwaukee, as Ted Simmons and Charlie Moore got the bulk of the playing time behind the plate during his years there.

Rangers manager Doug Rader angered many people in Texas by saying that Yost was an all-around better catcher than Sundberg, a fan favorite in the Dallas/Fort Worth area and an eventual member of the Ranger team Hall of Fame. Yost flopped in Texas, and was released on April 1, 1985, after only one season with the club. After being let go by the Rangers, Yost returned to the majors briefly in 1985 with the Montreal Expos, but failed to impress. He was released by the team in spring training of 1986. He finished his playing career in the Atlanta Braves organization in 1987.

After his playing career ended, Yost managed the Sumter Braves for three years before joining the Braves coaching staff in 1991. He was the team's bullpen coach for eight seasons and was their third base coach from 1999 to 2002. In 2003, he became skipper of the Brewers.

In 2008 Yost was fired by the Brewers with 12 games left in the season. At the time the team was tied for first in the National League wild card race, but had just been swept in a four-game series by their main rivals for a playoff spot, the Philadelphia Phillies. Dale Sveum, his interim replacement, led the Brewers to a playoff spot. Yost was out of baseball during the 2009 season.

In January 2010, Yost joined the Kansas City Royals organization as a special advisor to baseball operations, a job he did not hold for long. After the game on May 13, 2010, the Royals announced that they had fired manager Trey Hillman and that Yost was being brought in to replace him, with the team in last place with a 12-23 record. His mission was not to win immediately, but to help with yet another rebuilding effort by the Royals. While he endured some criticism in Kansas City for some of his in-game decisions, he also was very good at getting the team's group of young and talented players to jell together into a competitive unit. After years of futility, the Royals first showed signs of life in 2013 when they improved as the year advanced and ended up 10 games over .500, hanging on at the fringes of the postseason race in early September. In 2014, the team started slowly, so much that reporters began writing off the year as another lost season, but then turned things around and began a successful march to a postseason slot, their first since winning the 1985 World Series. Playing host to the Oakland Athletics in the Wild Card Game, Yost made a head-scratching move that almost blew up in his face when he brought in rookie starter Yordano Ventura in relief early in the game and he quickly allowed a bunch of runs to score in the unfamiliar role. However, his players came back, eventually winning a dramatic game in extra innings. That started an amazing postseason run that saw the Royals sweep through the ALDS against the Los Angeles Angels of Anaheim and then the ALCS over the Baltimore Orioles to reach the World Series. Considered underdogs, the Royals took the San Francisco Giants to the limit of 7 games before being defeated, playing excellent fundamental baseball during close games, including a number of wins in extra innings. The Royals were overjoyed with the unexpected success and on January 13, 2015 rewarded Yost with an extension until the end of the 2016 season.

On June 18, 2015, Yost became the winningest manager in Royals history as win #411 moved him past Whitey Herzog into first place on the team's all-time list; he had passed #2 man Dick Howser earlier that same month. In spite of all the wins, Yost still had an overall losing record with Kansas City, a result of his difficult first three seasons with a club still seeking its proper direction. Following the 2017 season, Yost broke his pelvis in a fall while working on trees on his property in rural Georgia in November. He made a full recovery, but first was confined in a wheelchair for two months. The fact that he had a cellphone with him saved his life, as he would otherwise have bled to death, given he could not move and he was not expecting anyone to pass by or check up on him in this remote part of the woods. The Royals had a dreadful season in 2018, finishing last in the AL Central with a record of 58-104, which was a feat in itself given the Chicago White Sox and Detroit Tigers were also rebuilding and overmatched against most opponents. The difference was that the Royals had only tentatively started their rebuild and were not expected to be competitive again for a number of years. This raised the question of whether Yost was the right man to lead them through that wilderness, but after the season's final day, GM Dayton Moore announced that the veteran skipper would be back in 2019. However, this began to look more and more like a final hurrah for Yost, as the Royals also hired former St. Louis Cardinals manager Mike Matheny that offseason, giving him a front office job that looked to everyone as a manager-in-waiting position. Indeed, on September 23rd, as another tough season was winding down, he announced that he would retire at the end of the year.

Yost wears #3 in tribute to his late friend, NASCAR driver Dale Earnhardt. He is the son of Ned Yost Jr., an All-American football star at Santa Rosa Junior College. His son, Ned Yost IV, played and coached in the Brewer chain. He is one of four major leaguers born in Eureka, CA. The nearest to Yost in age is Dane Iorg.