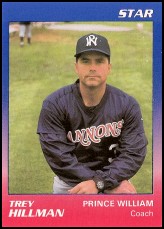 Trey Hillman attended the University of Texas at Arlington where he was a standout baseball player and was named to the UTA Athletic Hall of Honor in 1992.

After his playing career ended, Hillman spent the latter part of 1987 and all of 1988 scouting for the Indians in the Oklahoma/Texas area. Starting in 1989, Hillman spent 13 years in the New York Yankees organization primarily as a manager at every level and won three Manager of the Year awards and guided his teams to three first-place finishes. In 2002, Hillman was named Director of Player Development for the Texas Rangers. The following year, Trey signed a two-year contract to be the manager of the Nippon Ham Fighters of the Japanese professional baseball's Pacific League. He guided the club to its first Japan Series title ever in 2006. He was interviewed for the position as 2007 manager of the Oakland Athletics but remained with Nippon Ham and guided them to the best record in the PL. Hillman said he would not return to Japan for 2008 and there was speculation he was being considered for the New York Yankees job. On October 19th, 2007, Hillman accepted a multi-year managerial offer from the the Kansas City Royals.

Hillman's final games managing in Japan were a disappointment as the Fighters dropped four in a row in the 2007 Japan Series after winning game one. They only mustered four runs in those four games, including suffering the first perfect game in Series history in Game Five. The Fighters tied a Series record by scoring only 7 runs.

A lot was expected from Hillman in Kansas City following his success both in the minor leagues and in Japan. After a relatively promising first year in 2008, when the Royals went 75-87 and finished out of the cellar, the team fell back by 10 games in 2009 in spite of an outstanding year by pitcher Zack Greinke. When the Royals did even worse to start the 2010 season, Hillman was fired after the game of May 13 and replaced by former Milwaukee Brewers skipper Ned Yost. Criticisms directed at Hillman included the fact that he was unable to find a set alignment for the team, that he gave too much playing time to washed-up veterans at the detriment of developing players, and that he led a bullpen that was in continual chaos behing closer Joakim Soria.

In 2011, Hillman joined the Los Angeles Dodgers, serving as bench coach under new manager Don Mattingly until the end of the 2013 season. In 2014, he was a special coach with the New York Yankees and in 2015, he moved to the Houston Astros as bench coach, under new manager A.J. Hinch. He was replaced by Alex Cora following the 2016 season. He then became manager of South Korea's SK Wyverns for 2017, their first foreign manager. He was the first foreign skipper to guide a team to the Korean Series, doing so in 2018. They upset the Doosan Bears in six games, making him the first manager to win a Japan Series and a Korean Series. He had previously announced he would not return the following year as his parents in the US were ailing and he wanted to spend time with them. Instead, he found a job as first base coach and infield coach of the Miami Marlins in 2019, reuniting with Don Mattingly. In 2020, he moved to the position of third base coach and added the duties of infield coordinator.