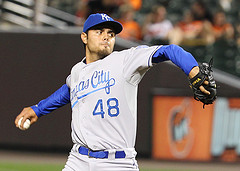 Joakim Soria pitched the third perfect game in the history of the Mexican Pacific League in 2006, following Vicente Romo in 1971 and Jesus Moreno in 1989. He twice has finished second in the American League in saves.

He was signed by the Los Angeles Dodgers as an undrafted free agent in 2001. He debuted in 2002 with the DSL Dodgers East, going 3-2 with a 2.01 ERA in the pitching-dominated league. He also threw four games for the GCL Dodgers, posting a 3.60 ERA and getting no decisions. Soria missed 2003 due to Tommy John surgery and only came into four games for one of the DSL Dodgers before they let him go.

In 2005, Soria pitched for the Mexico City Red Devils, going 5-0 with a 4.48 ERA, primarily as a reliever. It was a high-scoring league and Soria's ERA was better than the average mark of any team in the circuit. He was second on Mexico City in ERA, ahead of ex-big-leaguers like Jose Silva and Francisco Cordova.

Joakim split 2006 between Mexico City and the Fort Wayne Wizards, a San Diego Padres farm club (San Diego owned his MLB rights and Mexico City his LMB rights). With Fort Wayne, he was 1-0 with a 2.31 ERA, 5 hits allowed, two walks allowed and 11 strikeouts in 11 2/3 innings over 7 solid appearances. Soria spent most of the season with Mexico City as their closer, getting no decisions, saving 15 and having a 3.89 ERA in 39 games. He tied for 10th in the Mexican League in saves. In the 2006 Central American and Caribbean Games, Soria struck out 5 in 3 2/3 shutout innings, saving one game in five appearances as Mexico won Bronze.

That winter, the Kansas City Royals took Soria from San Diego in the 2006 Rule V Draft, making him the 2nd pick. Less than a week later, Joakim threw his perfect game to enter the Mexican Pacific League record books. He was dominating the LMP, going 9-0 with a 1.77 ERA in 11 starts for the Yaquis de Obregón after the perfect game was factored in. He had walked 19 and allowed only 46 hits in 71 1/3 innings, while striking out 73. He was leading the LMP in all three pitching Triple Crown statistics. He won the perfect game 6-0 over the Hermosillo Naranjeros, who featured a defending LMP batting titlist and Jerry Hairston Jr. as the big stars. He threw 101 pitches and fanned nine in the outing.

Soria pitched for Mexico in the 2009 World Baseball Classic, retiring all six batters he faced. He was 3-2, 2.21 with 30 saves for the Royals that season. He struck out 69 in 53 innings. He was 7th in the 2009 AL in saves, between Fernando Rodney and Bobby Jenks. Soria won Mexico's National Sports Award for 2010, after going 1-2, 1.78 with 43 saves for the Royals. He finished second in the league in saves, only two behind leader Rafael Soriano. He received votes for both the 2010 American League Most Valuable Player Award and 2010 American League Cy Young Award. He returned to the All-Star Game for the second time that season but did not appear in the AL's 3-1 loss to the NL.

In 2011, Soria requested that people no longer use his old nickname "The Mexecutioner", writing "How about if we change my nickname to something positive? In support to Mexico to stop all the violence!!!" He posted the highest ERA of his career during the 2011 season, at 4.03, and only collected 28 saves in 60 outings. His strikeout ratio fell slightly, to just under one per inning (60 in 60 1/3 innings), after clearing that by a good margin three of his first four seasons. He was 9th in the 2011 AL in saves between Sergio Santos and Kyle Farnsworth. Ironically, his slow-down came at a time when the Royals were finally beginning to show promise, with a number of good young players establishing themselves. It was particularly true in the bullpen, where youngsters Aaron Crow, Tim Collins and Greg Holland all pitched well, whereas Soria had been used to be the sole bright light in what was otherwise a disaster zone in previous seasons.

In 2012, he experienced discomfort in his elbow during the early part of spring training, and the news from medical specialists was not good. They diagnosed damage to his ulnar collateral ligament, a situation that usually leads to Tommy John surgery, a procedure which was performed on April 3rd by Dr. James Andrews; it was the second time he underwent the procedure, after first going under the knife in 2003. He missed the entire season, then on December 3rd signed as a free agent with the Texas Rangers. he ended up making 26 appearances with the Rangers in 2013, with a 1-0 record and a 3.80 ERA. Closer Joe Nathan left as a free agent after the season, and Soria was given the opportunity to succeed him in 2014. He did very well, with 17 saves in 19 opportunities and an outstanding 42/4 K/W ratio in addition to a 2.70 ERA in 35 games. However the Rangers were ravaged by injuries and had fallen well out of contention by the All-Star break and as a result, one week later, on July 23rd, Soria was traded to the Detroit Tigers in return for prospects Jake Thompson and Corey Knebel. Ironically, Nathan had signed with the Tigers to be their new closer, but was struggling with a 5.89 ERA at the time of the trade. Soria pitched 13 times for Detroit, going 1-1, 4.91. He recorded one save, but Nathan kept his job even though he did not really much. Soria was hit hard in the postseason however. In Game 1 of the ALDS against the Baltimore Orioles on October 2nd, he took over for Joba Chamberlain after the O's had already scored a couple of runs in the 8th inning to extend their lead to 6-3. With a runner on base, he allowed four of the five batters he faced to reach base before being lifted in favor of Phil Coke; all four scored, as well as his inherited runner, and byu the time the inning was over, the Tigers were out of the game, trailing 12-3. More problems followed in Game 2 the next day. he again reliever Chamberlain in the 8th, after Joba had allowed a run and put to men on with one out. The Tigers were still leading, 6-4 as Joakim walked J.J. Hardy to load the bases and Delmon Young followed with a bases-clearing double. He was charged with the 7-6 loss and the Orioles completed a three-game sweep two days later.

The Tigers' bullpen situation was still unsettled going into 2015. Nathan was still penciled in as the closer, but he went on the disabled list with a strained elbow on April 8th. Soria took over for him and quickly recorded saves in three of his next four outings to show that he should be considered as a permanent replacement for the veteran Nathan. In 43 games, he went 3-1, 2.85, with 23 saves, but with the Tigers going nowhere, on July 30th he was traded to the Pittsburgh Pirates for minor league infielder JaCoby Jones. He pitched 29 times for Pittsburgh, with no decisions except for 1 save, but with an excellent ERA of 2.03 and 28 strikeouts in 26 2/3 innings. He also pitched a scoreless inning in the Wild Card Game, which the Pirates lost to the Chicago Cubs. He became a free agent after the season and returned to the Kansas City Royals for a second stint. In 2016, he was 5-8, 4.05 with 1 save in 70 outings. He did better in 2017, as his ERA improved to 3.70 in 59 games and he went 4-3 with 1 save. In both seasons, he struck out over a batter per inning, showing that he still had good stuff.

On January 4, 2018, he was on the move again, being first traded to the Los Angeles Dodgers along with Scott Alexander in return for two prospects, and then being immediately flipped to the Chicago White Sox, along with fellow veteran reliever Luis Avilan, in return for another prospect, IF Jake Peter. He lasted less than a year in Chicago, as he was traded to the Milwaukee Brewers on July 26th for pitchers Kodi Medeiros and Wilber Perez. He pitched 26 times for Milwaukee, going 3-1, 4.09. He was excellent in the Division Series against the Chicago Cubs, making three scoreless appearances and picking up the win in extra innings in Game 1. In the NLCS, however, things did not go as well, as in two of his four games against the Dodgers, he gave up 2 runs in a third of an inning, ending up with an ERA of 18.00 as the Brewers lost. After the season, he signed a free agent contract with the Oakland Athletics on December 20th, for two years and $15 million.

In 2019, he went 2-4, 4.30 with 1 save in 71 games for Oakland, including his first career start, which came on June 5th against the Los Angeles Angels when he was used as an opener, giving up a solo homer to Tommy La Stella, the first batter he faced in his only inning of work. He struck out 79 batters in 69 innings. he followed that up with a solid year during the pandemic-shortened 2020 season, when he appeared in 22 games during the 60-game season and went 2-2, 2.82 with 2 saves. He had 24 strikeouts in 22 1/3 innings and pitched in the postseason for the fourth and final time of his career. He appeared in 2 games against the Chicago White Sox in the Wild Card Series and 2 more against the Houston Astros in the Division Series. However, like most members of the A's bullpen, he had a mediocre postseason, allowing 3 runs on 5 hits in the 4 innings. He returned for one more season in 2021 after signing with the Arizona Diamondbacks as a free agent and went 1-4, 4.30 in 31 games. The Toronto Blue Jays took a flyer on him at the trading deadline, giving up a couple of low-level prospects in the hope he would strengthen a bullpen that had been an Achilles heel all season for an otherwise excellent team, but injuries limited him to 10 outings over the final two months, and when he did pitch it was to the tune of a 7.88 ERA in 8 innings, putting him at 5.06 in 41 games for his final season. He became a free agent at the end of the season but found no takers and retired.