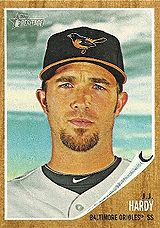 J.J. Hardy was a two-time All-Star and three-time Gold Glove winner at shortstop.

He hit .438 for the US team that won Silver in the 2000 World Junior Championship, his 10 runs tying Joe Mauer for the team lead. He tied Alexander Polyakov for 8th in the event in average and joined Andrei Kripochine and Yorkis La Rosa as the All-Star outfielders. He was drafted by the Milwaukee Brewers in the 2nd round of the 2001 amateur draft. He was signed by scout Brian Johnson and made his pro debut that summer.

On September 9, 2007, the first three batters for the Brewers homered in a game against the Cincinnati Reds, as Hardy followed Rickie Weeks and preceded Ryan Braun in hitting long balls off Phil Dumatrait. It was only the third time in major league history - all in the National League - that this had happened. Incredibly, Hardy was again in the middle of things the next time it happened, on May 10, 2012. Now playing for the Baltimore Orioles, he followed Ryan Flaherty's first major league homer with a long ball of his own, and Nick Markakis also went yard as the Orioles became the first team in American League history to execute the rare feat. The victim this time was Colby Lewis of the Texas Rangers.

On October 9, 2014, Hardy signed a three-year contract extension with the Orioles, worth $40 million, on the eve of the opening game of the ALCS against the Kansas City Royals.

J.J. started the 2016 season slowly, as after six games he was still looking for his first homer and RBI. He changed that in a 9-5 win over the Boston Red Sox on April 12th as he hit a pair of two-run homers and drove in 5 runs overall to help the Orioles improve to 7-0 on the year. However, on May 1st, he fouled a ball off his foot, causing a small fracture, putting him out of action until June 18th. He returned to play regularly the rest of the way, with a .269 average in 115 games, with 9 homers and 48 games. He was held hitless in 4 at-bats in the Wild Card Game against the Toronto Blue Jays, however. He then started the 2017 season slowly, as he was hitting just .211 with 3 homers and 21 RBIs when he suffered another serious injury on June 18th, breaking his wrist when hit by a pitch.

When he retired after the 2017 season, he had played 13,386 innings at shortstop - and none at any other position. Only 7 players in major league history have played over 10,000 innings there without appearing elsewhere, with the all-time leader being Derek Jeter at 23,225; Hall of Famers Luis Aparicio and Ozzie Smith are also on this short list.