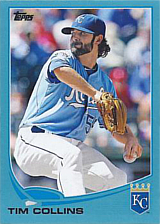 Collins was undrafted out of high school and ready to attend the Community College of Rhode Island. But fellow Worcester native and Toronto Blue Jays GM J.P. Ricciardi saw Collins pitch in American Legion ball and had him work out for the Jays, signing him in 2007. Working exclusively as a reliever, he was traded to the Atlanta Braves with shortstop Alex Gonzalez and Tyler Pastornicky for Yunel Escobar and Jo-Jo Reyes on July 14, 2010. He had a 1-0, 2.51 record with 9 saves in 35 games for the New Hampshire Fisher Cats of the AA Eastern League at the time. Two weeks later, the Braves sent him to the Kansas City Royals at the trading deadline on July 31st, as part of a deal that brought reliever Kyle Farnsworth and outfielder Rick Ankiel to Atlanta for outfielder Gregor Blanco and pitcher Jesse Chavez.

Collins made the Royals' staff in spring training 2011 and debuted on Opening Day, March 31st, against the Los Angeles Angels. He pitched a scoreless 9th inning as the third Royals reliever to debut that day: Aaron Crow and Nathan Adcock preceded him in relief of Luke Hochevar, and all three pitched well, not giving up a run in 3 1/3 innings. Tim earned his first major league win on April 3rd after pitching 3 innings of scoreless relief in a 12-9 win over the Angels. He posted a solid 3.63 ERA in 68 games as a rookie, with a record of 4-4. In 2012, he pitched another 72 games, went 5-4 and had a 3.36 ERA with 93 strikeouts in 69 2/3 innings. Tim had his third consecutive solid season in 2013 when he pitched 66 times and finished 3-6, 3.54. Those three seasons were spent with uncompetitive Royals' teams who finished well out of the postseason race, although there were signs of improvement in 2013. The following year, the Royals played a lot better and Tim had a 4.15 ERA after 18 games, when an injury sidelined him from mid-June to September. He came back to pitch four times in the second half of September, with no record and an ERA of 2.45. He played in the postseason for the first time, pitching once in the Division Series against the Los Angeles Angels and three times in the World Series against the San Francisco Giants, giving up 2 runs in 5 2/3 innings overall.

Collins missed the Royals' run to a Championship in 2015 as his season never got underway. He underwent Tommy John surgery on March 11th and missed the entire season. The Royals re-signed him for one year following their World Series triumph only to discover the surgery did not take, costing him all of 2016 as well. He spent 2017 in the Washington Nationals system, re-surfacing as a LOOGY in 38 games (22 2/3 innings) with a 4.37 ERA in 2018. He saw time with the Minnesota Twins in spring training 2019 before catching on with the Chicago Cubs. He made 9 appearances in several call ups with a 3.12 ERA. When the club acquired "Dutch Oven" Derek Holland at the trading deadline, he was cut loose, finishing the year in the Cincinnati Reds system. Tim signed with the Colorado Rockies for 2020.