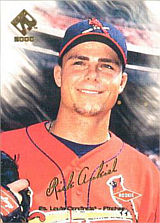 Hard-throwing pitcher Rick Ankiel was a top prospect who was plagued by wildness after his rookie year. A good hitter in his amateur days, he converted to the outfield and made his way back to the major leagues. In both 2008 and 2009, he had over 400 plate appearances for the St. Louis Cardinals.

In the 1996 World Junior Championship, Ankiel hit .417, second-best on the Bronze Medal-winning Team USA. He also was 1-0 with a 1.29 ERA on the hill despite 5 walks in 7 innings. The next summer, he was a two-way star for Team USA, going 3-0 with a 1.82 ERA and 48 strikeouts in 30 innings and hitting .387 to tie Matt Holliday for 4th on the squad. Ankiel was named the All-Star LHP in the 1997 World Junior Championship; he was the lone USA All-Star on the Bronze Medal co-winners. Ankiel was drafted by the St. Louis Cardinals in the 2nd round of the 1997 amateur draft. He was signed by scout John Dipuglia for $2.5 million and made his pro debut the next summer.

He was named Baseball America Minor League Player of the Year in 1999 and followed that honor with a solid rookie season for the St. Louis Cardinals in 2000, going 11-7 with a 3.50 ERA and 194 strikeouts and finishing second in National League Rookie of the Year voting. Suddenly, he imploded in the postseason, allowing seven runs and walking eleven in four innings. His struggles continued into the 2001 season, when he started seven games and had a 7.12 ERA, before being sent back to the minors. He finally returned to the Cardinals in 2004, appearing in five games out of the bullpen.

In early 2005, Ankiel made a surprise announcement that he was ending his pitching career and attempting to convert to outfielder. He had always been a good hitter in the minor leagues, and in 2001 had been sent to the Johnson City Cardinals of the Rookie-level Appalachian League after his well-publicized struggles. There, he hit .286 with 10 home runs and 35 RBI in 118 at-bats, in addition to his record of 5-3 with a league-leading 1.53 ERA in 14 games as a starting pitcher. He was named to the league All-Star team both as designated hitter and left-handed pitcher. In 2005, as a full-time outfielder splitting the season between A and AA, he hit .258 with 21 homers and 75 RBI in just 85 games.

In 2007, Ankiel was one of the top sluggers in the minor leagues. He batted .267/.314/.568 through August 8 with 32 home runs and 89 RBI in 102 games. He was leading the Pacific Coast League in homers and trailing Craig Brazell by one for the lead in the affiliated minors. He was tied with Scott Seabol for second in the PCL in RBI, one behind Joe Koshansky, and ranked 8th in slugging, right behind Val Pascucci. He made the PCL All-Star team in the outfield with Adam Jones and Delwyn Young. On August 9, 2007, Ankiel made his return to the big leagues. He belted a 3-run home run in the 7th inning of the Cardinals 5-0 win over the San Diego Padres and followed that up 2 days later by hitting 2 home runs against the Los Angeles Dodgers. In September, the Daily News reported that Ankiel had received eight shipments of Human Growth Hormone during 2004.

As an outfielder, Ankiel displayed one of the best throwing arms of all-time. He was regularly featured on highlight reels for making amazing throws from the outfield, throwing strikes to home plate from the outfield corner without the ball ever touching the ground.

On March 31, 2013, Ankiel became the first player to homer for the Houston Astros as an American League team. He connected with a pinch-hit three-run blast off Derek Lowe in the 6th inning on Opening Day as part of an 8-2 Astros win. He did not last very long as an Astro, being released on May 9th. He was hitting only .194, having struck out in 35 of 65 plate appearances. That included strikeouts in a major league record (for a non-pitcher) 10 straight plate appearances from April 2-8. While many observers thought this was the end of the road for Ankiel, he quickly found a new job at the major league level, signing with the New York Mets on May 13th. He played 20 games for the Mets, going 12 for 66 (.182). He was released again on June 11th and this time did not find a taker. He still was hoping to find a team for the following season, but when no offers were forthcoming, he announced in early March that he was officially retired.

In January of 2015, Ankiel was hired by the Washington Nationals as a "life skills coordinator". He was expected to mentor young players within the organization to deal with the stresses of life as professional athletes, drawing on the wealth of personal experience he had accumulated during his exceptional career. In particular, he specialized in working with young players who, like him, had to deal with the "yips" - the sudden mental inability to throw properly.

In August 2018, he resurfaced in the news when he participated in an amateur tournament, the "Bluegrass World Series" with a team of former major leaguers. What was newsworthy is that he took the mound for the first time in years and struck out the only batter he faced, then afterwards stated that he was "toying" with the idea of attempting a comeback as a pitcher. He explained that he had nothing to lose by this point and was in a better place psychologically then in the days when he was under the intense pressure of trying to save his professional pitching career. That October, he underwent Tommy John surgery.

He first became eligible for the Hall of Fame in its 2019 election. While he was not expected to receive more than a token vote or two, the fact that he mad managed to rescue his career enough to even make it onto the ballot was a huge achievement. Meanwhile, he was still working on a potential comeback as a pitcher, making potentially one of a very small number of players to appear in a major league game after receiving a vote on the BBWAA ballot (Jose Rijo had been the last to do so). Alas, he was one of 11 players on that vote not to receive a single vote and dropped off the ballot,. On July 30, 2019, he officially ended his comeback bid.

Ankiel is only the fourth player in history to make at least 40 starts as a pitcher and hit 40 home runs. The first three were born in the 19th century: George Van Haltren, Cy Seymour and Babe Ruth.