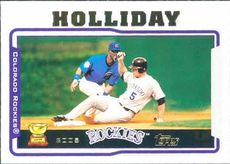 Matt Holliday, after playing five years with the Colorado Rockies, joined the Oakland Athletics for the 2009 season and was traded that July to the St. Louis Cardinals. Holliday had a lifetime major league batting average just below .300 and was one of the most consistent run producers in the major leagues from the mid-2000s to the early 2010s.

In the 1997 World Junior Championship, Holliday manned the outfield for the Bronze Medal-winning USA. He hit .387 overall for the summer with 8 stolen bases, second on the team.

Holliday played in the minors from 1998-2003, hitting over .300 only in the Rookie League in 1998. In 2004 he came to AAA ball for the first time, playing six games for the Tulsa Drillers, and spending the rest of the season as a major league rookie with the Rockies, finishing fifth in the 2004 National League Rookie of the Year Award voting. He then became a big hitting star for the Rockies, culminating in 2007 when he won the National League batting title and was the offensive leader of a team that rode a tremendous late-season hot streak to the World Series. He finished second in the MVP voting that year. In the decisive one-game playoff between the Rockies and the San Diego Padres on October 1st, he scored the winning run in extra innings in controversial fashion. In what had been a wildly entertaining contest, the visiting Padres had taken the lead, 8-6, in the top of the 13th inning on a two-run homer by Scott Hairston, but Holliday then hit a game-tying triple before the Padres could record an out in the bottom of the frame. They issued an intentional walk to Todd Helton to bring up light-hitting infielder Jamey Carroll, who hit a line drive to RF Brian Giles. Matt tagged up and Giles' throw beat him to the plate, but C Michael Barrett couldn't handle it cleanly. Umpire Tim McClelland took a few seconds to call the play, then gave the "safe" sign, but it is still unclear whether Hamilton ever actually touched the plate. In any case, the run stood, as this was before the introduction of instant replay, and the Rockies advanced to the postseason.

After another productive season for the Rockies in 2008, he was sent to the Athletics in a big trade that netted Colorado another future outfield great in Carlos Gonzalez. The Rockies knew that Holliday was about to become very expensive, and wanted to obtain some young players in return. He had trouble moving from the hitter-friendliest park in the majors to one of the toughest, and his production dipped significantly over the first half of the 2009 season. More importantly, the A's, who had had visions of competing for the AL West title that year with Holliday's hitting complementing an existing strong pitching staff, fell out of the race early and decided to trade Holliday for another haul of prospects. Matt ended up in St. Louis, where his hitting returned to his Colorado level, and where he formed an excellent duo with Albert Pujols in the middle of the line-up. In Game 2 of the NLDS that year, he dropped a fly ball hit by James Loney with two outs and no one on base in the 9th inning that led to the Los Angeles Dodgers winning the game on their way to a series sweep.

Playing for the Cardinals in 2011, Holliday was able to maintain an All-Star level of production in spite of a series of injuries. He underwent an emergency appendectomy in April, missed time due to a strained quadriceps in June, suffered a lower-back injury while preparing to lift weights, and on August 22nd had to be taken out of a game in the 9th inning when a moth became stuck in his ear. He still managed to hit .296 with 22 homers and 75 RBIs in 124 games. From 2006 to 2012, he drove in 100 or more runs in five of seven seasons.

In 2015, he set a National League record by reaching base in each of his first 43 games, breaking a record held by former teammate Pujols. It was still 10 games shy of the all-time record set by Derek Jeter in 1999. The streak ended after 45 games with an 0 for 3 night on June 2nd. On June 8th, he sustained an injury trying to catch a fly ball in the 2nd inning of a game against the Colorado Rockies and was placed on the disabled list the next day with a quadriceps strain. He was hitting .303 with 3 homers, 20 runs and 26 RBIs in 52 games. The injury caused him to miss the 2015 All-Star Game, to which he had been elected as a starter and kept him out until July 17th. However, only two weeks after his return, he re-injured the muscle while running to first base on July 29th and returned to the disabled list. He did not return until September 17th and finished the season with a .279 average, 4 homers and 35 RBIs, the last two numbers the lowest of his major league career. In the Division Series, he went 2 for 16 (.125) as the Cardinals were upset by the Chicago Cubs.

Matt was back healthy in 2016, but he was not setting the world on fire. On August 11th, he was hitting .241, although he did have 19 homers and 60 RBIs. That day, he was hit by a pitch from Mike Montgomery in a game against the Cubs, breaking his right thumb and placing him on the disabled list. The Cards had fallen 13 games behind the first-place Cubs at that point, and were in a tough race for a wild card spot, so his expected prolonged absence was a big blow to the team. He came back on September 30th and played the team's last three games, going 2-for-2 with a homer, as the Cards fell just shy of landing a wild card spot. Altogether, he hit .246 with 20 homers and 62 RBIs in 110 games. He became a free agent after the season and on December 4th signed a one-year deal with the New York Yankees for $13 million. He spent the 2017 season with the Yankees, as one of a small number of veterans on a very young team that earned the nickname "the Baby Bombers". In 105 games, he hit .231 with 19 homers and 64 RBIs. He only played one game in the postseason, going 0 for 3 in Game 1 of the ALCS against the Houston Astros, as he had largely been eclipsed by others in his role as the team's primary DH.

It appeared his career was over after he failed to find a team heading into spring training in 2018. However, on July 29th, the Rockies reported that they had signed him and sent him to the Grand Junction Rockies on a rehabilitation assignment, with a view of potentially helping his old team down the pennant stretch. Indeed, the Rockies selected his contract on August 23rd, adding him to their 25-man roster. He had done very well with the AAA Albuquerque Isotopes, hitting .346 with 3 homers and 14 RBIs in 15 games. He hit his first homer of the MLB season a couple of days later, on August 25th, as a pinch-hitter off John Gant of the Cardinals. He did well, hitting .283 in 25 games with a pair of homers and an OBP of .415, so he was added to the team's postseason roster. He went 1 for 3 with a double in the Rockies' win over the Chicago Cubs in the Wild Card Game, and 1 for 5 in their loss to the Milwaukee Brewers in the Division Series. That was his last major league action, as he retired after the season. In 15 major league seasons, he hit .299 with 316 homers and 1220 RBIs.

The only other major leaguer through 2009 with the last name Holliday is Bug Holliday, who played in the 19th Century.

Holliday's father, Tom Holliday, took Oklahoma State University to the College World Series as head coach in 1999, and then became an assistant coach at North Carolina State University. His brother Josh Holliday became head coach at Oklahoma State in 2013. Matt became an assistant coach for Josh in 2020. Matt's son Jackson Holliday was considered a potential top-5 pick in the 2022 amateur draft as a high school shortstop.