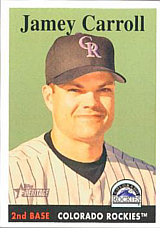 Jamey Carroll scored the final run in Montreal Expos history, on a Terrmel Sledge RBI single in their final game against the New York Mets on October 3, 2004. A versatile utility infielder, he was expected to be organizational depth as a fourteenth round pick in the 1996 amateur draft and ended up surviving twelve big league seasons with a .272/.349/.338 slash line in 1,276 games. In his final game, September 27, 2013, he collected his 1,000th hit, doubling off ace Chris Sale of the Chicago White Sox as a member of the Kansas City Royals. His best season came after being sold by the Washington Nationals to the Colorado Rockies for $300,000; in the ensuing 2006 season, he hit .300/.377/.404 with a career-best 5 homers and 84 runs scored while primarily playing second base in 136 games. A career highlight came in the 163rd game of the 2007 season, a one-game playoff against the San Diego Padres on October 1st. In the bottom of the 13th inning, he came up with Matt Holliday on third base and Todd Helton on first, with nobody out, as Holliday had just tied the game, 8-8, with a two-run triple, and Helton had been issued an intentional walk. He hit a line drive straight at RF Brian Giles, but Halladay still tagged up and scored the winning run as C Michael Barrett was unable to handle the throw home. It's not clear if Halladay ever managed to touch the plate, but the Rockies still went to the postseason for only the second time in team history. Jamey went 0 for 2 with a walk as the Rockies made it to the World Series, only to be swept by the Boston Red Sox.

Jamey was never much of a power threat, those 5 homers in 2006 part of only 13 career blasts. He once went 1,348 at-bats between homers after he went yard on August 9, 2009 while a member of the Cleveland Indians. His next shot came more than three years later, when he connected against the Chicago White Sox on September 3, 2012, playing for the Minnesota Twins, after spending two homer-less seasons with the Los Angeles Dodgers.

Jamey's brother, Wes Carroll, played six seasons in the minors, reaching Triple A, and became head coach at their alma mater, the University of Evansville, in 2009.