Note: This page links to All Star outfielder Brian Giles. For the infielder who played from 1981 to 1990, click here. 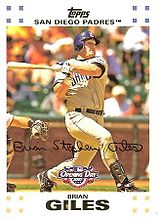 Brian Giles was a slugging outfielder whose best years came with the Pittsburgh Pirates from 1999 to 2002. For a period of time, he was one of the best hitters in the major leagues, as he hit 30+ homer all four of those seasons. His power went down later in his career but he could still get the job done, hitting for a good average, solid power, and walking over 100 times a year. He was a very solid fielder with a good arm who could play all three outfield positions but his best was left field and he was competent in center or right.

The brother of Marcus Giles, he is not to be confused with the first Brian Giles, who played six years in the majors in the 1980s and is no relation. Brian announced his retirement after two Cactus League games with the Los Angeles Dodgers in 2010. He said his arthritic knee wasn't responding as well as he had hoped.