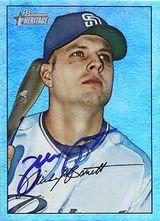 Michael Barrett once caught a baserunner (Morgan Ensberg) stealing second without throwing the ball. Ensberg had broken for second on a pitch-out and then froze. Barrett began running towards Ensberg, who tried to return to first but could not beat the catcher there, resulting in one of the oddest caught stealing plays in history.

On May 20, 2006, Michael was involved in an on-field altercation with the Chicago White Sox' A.J. Pierzynski. After a collision at the plate, Barrett punched Pierzynski in the face. A bench-clearing brawl ensued, resulting in four ejections. Barrett received a ten-game suspension. On September 2 of that same season, Barrett was injured when a foul ball hit his groin which in turn caused bleeding in his scrotum. He underwent emergency surgery the same afternoon.

In 2007, Barrett made headlines again when he got into a fight with teammate Carlos Zambrano. During a game against the Atlanta Braves on June 1, tensions began to rise between the two when the Chicago Cubs allowed the Braves to score five runs in the fifth inning. The Braves recorded twenty hits, en route to winning 8-5. However, their productivity became overshadowed by the scuffle between Zambrano and Barrett. As the two returned to the dugout after the 5th, they had an exchange of words, which escalated into a small fight. After Lou Piniella dismissed the two from the game, another fight ensued within the Cubs’ clubhouse, and Zambrano punched Barrett's lip. The wound required Barrett to go to the hospital and receive stitches. Zambrano remorsefully admitted he was at fault after the ordeal, and Barrett later stated they had resolved their differences.

Barrett hit .372 for the US in the 1994 World Junior Championship to help them win Bronze. He was named to the All-Tournament Team at third base.

Barrett was the manager of the GCL Nationals in 2014-2015. His cousin is Scott Fletcher.