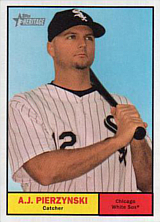 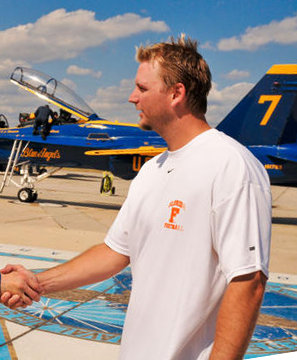 Catcher A.J. Pierzynski was selected by the Minnesota Twins in the third round of the 1994 amateur draft. After rising through the Twins system, he made his big league debut in 1998. Over the next two seasons, he had several cups of coffee before becoming the Twins regular catcher in 2001. The following year, he hit .300 and was named an All-Star. In 2003 his numbers were even better, but with prospect Joe Mauer ready for big league catching duties, the Twins deemed Pierzynski expendable and traded him to the San Francisco Giants. While he performed well on the field for the Giants, off the field he was labelled "arrogant" and a "clubhouse cancer". After the season, San Francisco signed free agent Mike Matheny, sealing Pierzynski's fate with the club. He was released the next day.

Pierzynski signed with the Chicago White Sox in early 2005. He hit a then career-best 18 homers with the club and was an integral part of the team's run to the postseason. His most memorable moment came in Game 2 of the ALCS. With the game tied in the bottom of the 9th, he reached first base on a controversial dropped third strike call against Josh Paul of the Los Angeles Angels, which extended the White Sox inning and allowed them to eventually score the game-winning run. In 2006, Pierzynski hit .320 in the season's first half and made the All-Star team for the second time in his career. He ended the season with a .295 average and 16 homers. His numbers dropped slightly in 2007, when he hit .263 with 14 home runs.

In August of 2012, A.J. hit home runs in five consecutive games for the White Sox to reach a season total of 20 for the first time of his career. The 5th homer came in spectacular circumstances on August 5th, as he hit it as a pinch-hitter for his back-up, Tyler Flowers, in the 7th inning of a game against the Los Angeles Angels of Anaheim. The two-run shot off Jason Isringhausen put the Sox ahead, 3-2, in a game they won, 4-2, to give Chicago its 9th win in 12 games. He finished the year with 27 homers, 77 RBI and a .278 average in 135 games, and was a recipient of a Silver Slugger Award as the best-hitting catcher in the American League for the first time of his career.

Pierzynski became a free agent after the 2012 season and on December 20th signed a one-year deal with the Texas Rangers. He hit .272 with 24 doubles and 17 homers in 134 games as the Rangers' starting catcher, performing at his established level, then after the season, on December 3rd, moved to the Boston Red Sox on another one-year contract. He was stepping into the breach which had opened earlier that day when Jarrod Saltalamacchia signed a three-year deal with the Miami Marlins. A.J.'s stay with the Red Sox was short: he hit .254 in 72 games before being designated for assignment on July 9th with the team in last place, opening a spot for prospect Christian Vazquez. It took him until July 26th to find a new team, when the St. Louis Cardinals offered him a contract, a couple of weeks after losing starting catcher Yadier Molina to injury and coming to the conclusion that they could not leave the void left by his absence internally. He was inserted in the starting lineup that very day and went 3-for-4 with an RBI as the Cards defeated the Chicago Cubs, 6-3. He played 30 games for St. Louis, hitting .244. In the postseason, Molina once again went down with injury, giving A.J. a chance to make a start in the NLCS against the San Francisco Giants and he went 1 for 6 in two games. He became a free agent again after the season and on January 7, 2015 signed with the Atlanta Braves to back up prospect Christian Bethancourt. He ended up playing regularly, as Bethancourt struggled, getting into 113 games, during which he hit an even .300 with 24 doubles and 9 homers, good for an OPS+ of 114. The Braves were pleased with his unexpected strong performance and re-signed him for another year after the season. He recorded his 2,000th hit in 2016, his last in the bigs.

Pierzynski was the recipient of a punch to the face delivered by Cubs catcher Michael Barrett following a collision at home during an interleague matchup on May 20, 2006.

Away from the diamond, Pierzynski entered the world of professional wrestling, serving as manager for The Demon (Sox minor league conditioning coordinator Dale Torborg) in a pay-per-view event for TNA Wrestling in 2005. He challenged WWE superstar John Cena to a steel cage match on ESPN2's Cold Pizza in 2006, wearing TNA's X-Division championship, a belt Cena asked if he got from a gumball machine outside. He made another appearance in The Demon's corner in 2007, then showed up in a bizarre, episode-long edition of The Price Is RAW, WWE's flagship program, hosted by The Price Is Right emcee Bob Barker.

After part-time work during his playing career, Pierzynski became a full-time analyst for Fox Sports in 2017. He became eligible for election to the Hall of Fame in 2022 and while he had absolutely no chance of making it, he did receive a pair of votes before being dropped off the ballot.