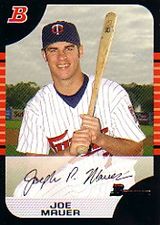 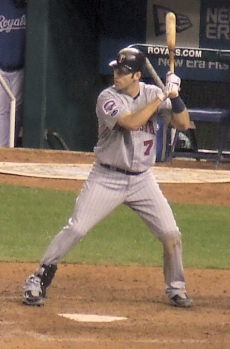 Joe Mauer made a name for himself as a top catcher in the majors at a young age. Mauer was 3 for 9 in the 1999 World Junior Championship, which the US won; he backed up Scott Heard at catcher; despite his backup role, he would go on to one of the brightest careers from the team (Carlos Quentin was the only other future All-Star). The US would only get the Silver in the 2000 World Junior Championship but Joe put on a show at .559 with 15 RBI, both numbers leading the tourney (.059 ahead of runners-up Dae-ho Lee and Scott Wearne; Russell Martin may have been 2nd with 12 RBI). He was the All-Star first baseman (Tony Richie and Donny Lucy did the catching for the US). Mauer was drafted by the Minnesota Twins in the 1st round of the 2001 amateur draft. He was signed by scout Mark Wilson and made his pro debut that summer.

At age 21, in 2004, he was already hitting .308 in the majors (in 35 games), at age 22 he hit .294 as the regular catcher for the Minnesota Twins in 2005, and at age 23 spent most of the 2006 season sitting atop the American League list of batting leaders. He became the first catcher to win the batting title in the American League by compiling a .347 average to beat Derek Jeter by four points; Hall of Famer Ernie Lombardi had been a batting champion in the National League. In 2008, Mauer won a second title, although his .328 average was one of the lowest among batting title winners in recent years. On June 4, 2008, Mauer hit a two-run sacrifice fly, the first of its kind in the majors in over 7 years. In 2009, he won the title again; that year, he was also named the American League MVP after hitting .365/.444/.587 in 138 games. He hit 28 homers that year, more than twice his next best single-season total, of 13 in 2006. The Wall Street Journal ran an article in September of that year to the effect that Mauer and Jeter were the top candidates for the 2009 MVP award. Sabermetricians were said to feel that Mauer was clearly the top offensive player, but Jeter's team was in front and there was a lot of sentiment for Jeter to win his first MVP award. In the end, Mauer came out on top.

While Mauer's power went down to his more traditional level in 2010, when the Twins moved to the more pitcher-friendly Target Field, he managed to keep his batting average quite high, at .327, even though he hit only 9 homers. His 88 runs, 75 RBI and 65 walks still made him an extremely effective offensive player, as witnessed by his OPS+ of 140. However, he was bothered by a string of injuries early in 2011 and he did not hit his first homer of the year until July 27th, in his 46th game. He ended that season at .287 with 3 homers and 30 RBI in only 82 games, giving rise to concern that he was paying the toll for playing all those games behind the plate in previous seasons. In spite of his struggles, his OPS+ was still above 100, at 102, for the 8th straight season, given his many other ways of contributing to the Twins offense. That offense was quite anemic that year, when the injury-racked team not only missed the postseason, but fell to the cellar in the AL Central.

Mauer was also a top high school quarterback. He was selected the Player of the Year by USA Today in 2000 and was slated to play both football and baseball for Florida State University before turning pro. However, Mauer was the #1 overall pick in the 2001 amateur draft, prompting him to abandon plans to go to college. As a local Minnesota boy, he was considered to be a "signability pick" ahead of the more-heralded Mark Prior and Mark Teixeira, but hindsight has shown the Twins made a perfectly good choice. Throughout his minor league career Mauer was considered to be one of the best prospects in the minors and he was named the 2003 Minor League Player of the Year by Baseball America.

Mauer, despite being taller and much younger than most catchers, has been considered an elite defender from the time he reached the majors. There has always been concern, however, that the strain of catching full-time would affect him more than other players and that he would need to move to the outfield or first base at some point. His injuries early in the 2011 season only increased this talk. On August 27, 2012, Mauer caught his 832nd game as a Twin, passing Earl Battey for the most in Minnesota history. Following his previous injury-plagued season, manager Ron Gardenhire had begun using him more carefully that year, giving him more frequent starts at first base or DH in order to preserve his health for the longer term. 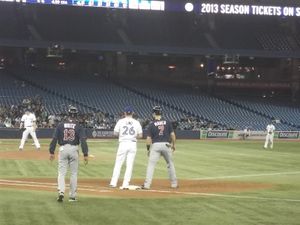 Mauer on first, during a game in Toronto. October 2012

Mauer has broken up three no-hitters in the 9th inning, doing so against Gavin Floyd (May 6, 2008), Neftali Feliz (a combined attempt with Rich Harden August 23, 2010) and Anibal Sanchez (May 24, 2013). In 2013, he played 113 games and hit extremely well, putting up a batting line of .324/.404/.476 with 35 doubles and 11 homers. However, he only had 47 RBIs for the last-place Twins, and on August 19th suffered a concussion when he took a foul ball off his mask in a game against the New York Mets. While he had hoped to come back, the Twins decided in late September to shut him down for the remainder of the year, as there was no point risking further injury with nothing to play for. He had been hitting extremely well when the injury occurred, going 17 for 43 (.395) over his last 10 games, including a 5-for-7 game in which he homered and collected 4 RBIs against the Cleveland Indians on August 14th. He was presented with a fifth Silver Slugger Award after the season, but a few days later, with long-time 1B Justin Morneau having left the team, the Twins announced he would move to first base permanently in order to preserve his long-term health. The concussion had long-term effects, as he suffered from bouts of blurred vision over the next couple of seasons.

With the 2014 All-Star Game taking place at Target Field, Mauer was named an All-Star Ambassador by Major League Baseball. Now a full-time first baseman, he played 120 games for the Twins in 2014, hitting .277 with 4 homers and 55 RBIs. It was good for a slightly above-average OPS+ of 107, but was a far cry from his best offensive seasons, and below expectations for the position. In 2015, the Twins were much improved and remained in contention for a playoff spot for most of the season. He played 158 games that year, the most in any season of his career, but his production continued to be disappointing, with a .265 average, 10 homers and 66 RBIs. His biggest contribution was perhaps his leadership on a young team that had not been expected to contend. The question was now, with the team improving and expected to contend again, was his pedestrian production at a key offensive position dragging down its potential?

In 2016 Mauer and the Twins struggled. He was relatively healthy, appearing in 134 games but with overall production similar to 2015 (.261/.363/.389 with 11 homers and 49 RBIs). Mauer did slip off toward the end of the year, hitting just .111 in September and missing the majority of his season's games as the team spiraled to a final record of 59-103. Thus 2017 started with low expectations for the Twins. To the surprise of many the team played inspired baseball throughout the season, claiming a wild card berth and a spot in the playoffs. Mauer again had starting first base duties and had a resurgent year (.305/.384/.417 in 141 games), batting over .300 for the first time since 2013. He was at his best coming down the pennant race stretch, batting over .330 in both August and September. He was 1 for 5 in the Twins' loss to the New York Yankees in the Wild Card Game. On April 12, 2018, he collected his 2,000th hit in a 4-0 win over the Chicago White Sox. It was the final year of his contract, and as the season advanced, he hinted that he would retire at the end of the year. On the final day of the season, September 30th, he started at first base. He doubled to left off Juan Minaya of the White Sox in the 7th inning in what was hid final at-bat, then came out in the top of the 9th wearing his catcher's gear, caught one pitch from Matt Belisle then was pulled out of the game to a rousing extended ovation as Chris Gimenez replaced him. It was his first time playing his original position since 2013. This improvised ceremony clearly indicated that he considered this to be his final game. He finished the season at .282 in 127 games, with 6 homers and 48 RBIs. On November 11th, he confirmed his retirement by buying a full-page ad in the Star Tribune to thank the fans for their support during his career. Shortly thereafter, the Twins announced that they would retire his uniform number, 7, on June 15, 2019.

The most similar player to Mauer, based on similarity scores, is Dustin Pedroia. That is somewhat fitting as they were back-to-back AL MVPs in 2008 and 2009, Pedroia's MVP season preceding Mauer's award. At the end of the 2018 season, Pedroia was still the only player remotely close to Mauer by this method, at 917. Next closest were Bill Madlock and Marty McManus, both in 880's and neither being particularly comparable to Mauer, an indication of how unique a player he had been.

He has two brothers, Jake and Bill, who played in the Twins minor league system. His great-uncles John Mauer Sr. and Ken Mauer, played pro ball as well.