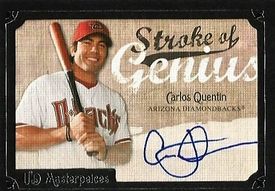 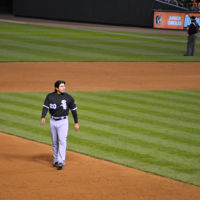 A star athlete in high school growing up in the San Diego, CA area, Quentin hit .231 for the USA in the 1999 World Junior Championship; the team won it all though he had the second-lowest average on the squad. Of his teammates, only Joe Mauer would have as bright a career in the big leagues.

Quentin was a star for three years in college. In 2001, he played regularly as a freshman for Stanford University, the #2 team in the country (according to Baseball America). He hit .345/.408/.530 that year and followed up with a .303/.398/.539 sophomore season. He made the Pac-10 Conference All-Conference team and was named the Conference's newcomer of the year. Quentin was the MVP of the finals in the 2002 Haarlem Baseball Week, going 3 for 5 with a double and RBI to lead team USA to a victory. He slipped in the 2002 World University Championship, batting .227/.370/.409 for team USA as they won a Silver Medal. In 2003, he batted .396/.494/.630 and was third in the Pac-10 in average. He again made the All-Conference team and Stanford was again ranked second nationally.

He was selected by the Arizona Diamondbacks in the first round of the 2003 amateur draft, the 29th overall pick, their second first-round selection, following Conor Jackson. He was signed by scout Fred Costello for $1.1 million but did not play that year due to an arm injury.

In 2004, Quentin hit .310/.428/.562 with 64 runs in 65 games for the Lancaster Jethawks and moved up to the El Paso Diablos along with Jackson and Jamie D'Antona - the three had been called the "Three Amigos" for Lancaster. With El Paso, he put up a .357/.443/.533 line, showing he had missed nothing due to the injury. His .435 OBP was fifth in the minor leagues and he was hit by 43 pitches, the most in the minors. He led the California League by getting plunked 27 times and was one behind the co-leaders in the Texas League. BA named him the #4 prospect in the California League, the #7 prospect in the TL and the #8 OF prospect in all of baseball. He was considered the Diamondbacks' top prospect.

Quentin began 2006 back in Tucson. Hitting .289/.424/.487, he was promoted to Arizona in July and homered in his first major league game. He finished the season with a .253/.342/.530 line in 57 games for the 2006 Diamondbacks. Amazingly, despite only 85 games in the minors, he was second in all of minor league baseball in times hit by pitch (31), leading the PCL. Baseball America rated him the #10 prospect in the Pacific Coast League, between Jason Hirsh and Félix Pie.

Surprisingly, Quentin failed to claim a regular job in 2007, because his hitting was not up to what was expected. In 81 games, he put up a line of .214/.298/.349, for a 63 OPS+. He played mainly in right field, but toward the end of the year began giving way to another phenom, Justin Upton, who made him expendable. He was sent back to Tucson for 33 games, in which he hit .348 and slugged .574, showing that his bat was still alive, even though he had trouble with major league pitching. As a result of his poor performance in the National League, he was left off the D-Backs' postseason roster.

In December 2007, Quentin was dealt to the Chicago White Sox for Chris Carter. As a starter, he finally emerged in 2008, and at the end of May, was second in the American League in home runs and RBI. He had his first career walk-off home run on May 25th, in a 3-2 victory against the Los Angeles Angels of Anaheim. He also hit a two-run home run earlier in that game. Quentin was hit by pitches in five straight games in August 2008, the first player since 1920 to accomplish that kind of a streak. He was named to the All-Star team for the first time that year. Replacing Josh Hamilton in left field for the AL, he went 0 for 4 the rest of the way. He flied out against Brian Wilson, reached on a Dan Uggla error, grounded out versus Aaron Cook and fanned against Carlos Marmol. The AL won, 4-3, in a 15-inning affair.

Quentin was still leading the league in homers in early September when he hit his right hand on his bat, which he was holding in his left hand. The move broke his right wrist and came in frustration after fouling off a Cliff Lee pitch. Quentin required surgery, significantly hurting the ChiSox's pennant hopes. He finished the year with a batting line of .288/.394/.571, with 36 homers and 100 RBI, but once again missed the postseason, this time because of his hand injury. He was 4th in the 2008 AL in OBP (behind Milton Bradley, Joe Mauer and Nick Markakis), second in slugging (just two points shy of leader Alex Rodriguez), tied Rodriguez for second in OPS (behind Bradley), was second in home runs (one behind Miguel Cabrera), second with 20 times hit by pitch (trailing Jason Giambi) and was first in at-bats per homer (13.3). If not for his injury, he likely would have led the league in dingers.

In 2011, he returned to the All-Star Game, thanks to his best season since 2008. He played 118 games, hit .254/­340/.499 and slugged 31 doubles and 24 homers. He had a 124 OPS+ and fielded .994. He was only among the league leaders in times hit by pitch (23, first). In the 2011 All-Star Game, he replaced Jose Bautista in right field. He popped up against Jair Jurrjens. The other time up, facing Joel Hanrahan, he hit into an error by Starlin Castro. He was the most productive of the Sox's outfielders, and the only one with trade value as Chicago looked to rebuild after changing managers late that season. On December 31st, the Sox sent him to his hometown San Diego Padres in return for two minor league pitchers, Simon Castro and Pedro Hernandez.

Quentin's first season with the Padres in 2012 started with a problem, as he was diagnosed with a partial meniscus tear in his knee after an MRI on March 17th. The knee had been bothering him for a while, even though he was hitting .533 in his first six Cactus League games. He underwent surgery on March 19th and missed his team's first 49 games of the season, playing for the first time on May 28th. He made up for lost time by going on a power tear as soon as he took the field, hitting 4 doubles and 5 homers in his first 6 games with his new team. He ended up playing 86 games that season, hitting .261/.374/.504, with 21 doubles, 16 homers and 46 RBI. That was good for an excellent 145 OPS+ in the tough hitting conditions of PETCO Park.

On April 11, 2013, he started an ugly incident in a game against the Los Angeles Dodgers, when he charged to mound after being hit in the left shoulder by a pitch thrown by Zack Greinke. He tackled Greinke to the ground and the two ended up at the bottom of a huge pile of players as both dugouts emptied. In trying to protect himself from the initial assault, Greinke had turned his left shoulder towards Quentin, and in absorbing the blow broke his left collarbone, putting him on the shelf for some time. Quentin was ejected from the game and was then handed an eight-game suspension for his attack on the pitcher. While Quentin tried to defend himself afterwards by claiming Greinke had meant to hurt him, a number of observers, such as former player Craig Biggio, commented that Quentin was known for crowding the plate - and was perennially among leaders in hit-by-pitch as a result - and should accept that he would get hit from time to time. He was again limited to 82 games that season, and again hit well when he was in the line-up, finishing with a .275 average, 21 doubles, 13 homers and 44 RBIs. ggod for an OPS+ of 145.

If injuries had cost him a big part of his 2012 and 2013 seasons, it was even worse in 2014 however. This time, a variety of ailments limited him to 50 games, and he did little when he was able to take the field, hitting only .177 with 4 homers and 18 RBIs. His OPS+ fell to 75. The Padres essentially wrote him off after the season, as they acquired a number of outfielders during the off-season, including Matt Kemp, Justin Upton and Wil Myers, leaving no room for Quentin.

End of the road[edit]

On April 5, 2015, the Padres cleared their logjam of outfielders by trading Quentin along with Cameron Maybin, another flychaser who had lost his starting job, prospects Matt Wisler and Jordan Paroubeck, and the 41st overall pick in the 2015 amateur draft to the Atlanta Braves for closer Craig Kimbrel and outfielder Melvin Upton. However, he never played for the Braves in any game, as the team released him on April 14th, making it clear that they had only acquired him in order to get rid of Upton and his punishing contract. On April 22nd, the Seattle Mariners signed him to a minor league contract and assigned him to the AAA Tacoma Rainiers. He played 5 games for Tacoma, going 3 for 17, before announcing on May 1st his decision to retire from the game because of chronic knee injuries.

However, after sitting out most of the 2015 season, Quentin had second thoughts about his decision to retire and on February 2, 2016, he signed a minor league contract with the Minnesota Twins in hope of reviving his career. He was unable to make it back to the majors, however, and was released. He played 21 games for the Pericos de Puebla in the Mexican League that year, hitting .211. In 2017, he played briefly for the Acereros de Monclova, also in the Mexican League.

In only his third season, in 2008, he broke Mark Quinn's mark for most home runs by a player whose last name begins with the letter Q. He finished with 154 homers, annihilating the previous mark.