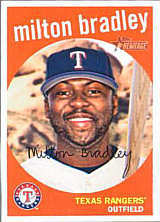 "When we traded for Milton, I think we knew everything that came along with it. We knew the past, we don't necessarily think that everything's going to be completely different because he came to a different place. That's fine. I would take nine Milton Bradleys if I could get them." - Paul DePodesta, 2004

Milton Bradley had a productive major league career while routinely enveloped in controversies centered on his temper. He has run afoul of the law during and since his playing days, involved and convicted of a series of deeply troubling domestic violence charges.

Bradley grew up in difficult circumstances in Long Beach, CA with a single mother who had trouble making ends meet. He explained that this hardship motivated him to work hard to reach the major leagues, in order to ensure his mother would no longer have to deal with these problems. He was drafted in the 2nd round of the 1996 amateur draft by the Montreal Expos and was seen as a prize catch, a five-tool player with tremendous potential. In the 1999 Pan American Games, Bradley hit .292 for Team USA to help them qualify for the 2000 Olympics. In the Gold Medal game, the center fielder hit 5th for the Americans and doubled off José Contreras; he scored the US's lone run in that 5-1 loss.

Milton made his major league debut with the Expos in 2000 after a minor league career marked by excellent production and clutch hits, as well as clashes with umpires that forced him to take anger management courses. Expected to become another Vladimir Guerrero, he struggled at the plate, and spent time back in the minors in 2001. Over parts of two seasons, he hit .221 and .223 with only three homers. He seemed to be coming into his own, having beaten Peter Bergeron out of the Expos' starting center field job thanks to his sparkling defense and showing some doubles power, when he clashed with owner Jeffrey Loria. Loria saw him in the locker room wearing a tee-shirt on which was written a nasty message, which he found unprofessional. The verbal altercation ended with Loria ordering general manager Jim Beattie to trade Bradley immediately, and on July 31, he was sent to the Cleveland Indians in return for minor league pitcher Zach Day, a poor return for such a talented player.

Bradley spent two full seasons with the Indians after a 10-game stint in 2001. In 2002, he hit only .249 in 98 games, but in 2003, he blossomed, hitting .321 in 101 games, with 18 doubles and 9 homers. He ran into various off-field problems which wore out his welcome with the team, and at the end of spring training in 2004, he was traded to the Los Angeles Dodgers for Franklin Gutierrez after a run-in with manager Eric Wedge. In 2004, playing for the Dodgers, not only did Bradley hit the 24th upper deck home run in Coors Field history, but he also hit the 13th lodge-level shot in Dodger Stadium history. He recorded his first two-home run game on April 25 against the San Francisco Giants; his team won 9-0. He played a career-high 141 games that season, hitting .267 with 19 home runs and 67 RBI. He went 3 for 11 with 5 walks and a home run in the NLDS against the St. Louis Cardinals. In 2005, he missed a lot of time with injuries, playing only 75 games, but hitting .290 with 13 homers.

After the 2005 season, Milton was sent to the Oakland Athletics for minor league outfielder Andre Ethier in a typical Moneyball deal: the A's valued Bradley's on-base ability and saw him as underrated because of all the time missed to injuries, while they considered Ethier too much of a free swinger to ever amount to much in the majors. In fact, Ethier would blossom into a star in Los Angeles, but Bradley gave the A's an excellent - if abbreviated - season in 2006. In 96 games, he hit .276 with a .370 OBP, 14 homers and 52 RBI. He went only 1 for 13 in the A's three-game sweep of Minnesota in the ALDS, but was Oakland's best hitter in the ALCS loss to Detroit: he went 8 for 19 with 2 homers, 4 runs scored and 5 RBI. He started 2007 with the A's but injuries limited him to 19 games, during which he hit .292. Bradley was first traded to the Kansas City Royals that year, though the deal never officially went through after Bradley failed a team physical, then to the San Diego Padres for Andrew Brown.

Milton was very productive during the last part of the 2007 season with the Padres. His season ended early. He got into a dispute with umpire Mike Winters over a call in late September. Winters used profane language to bait Bradley. First base coach Bobby Meacham tried to intervene before things got really nasty and tried to move Bradley away from the budding confrontation, but the outfielder tore a knee ligament as a result. He had hit .313/.414/.590 with 11 home runs in 42 games for the Padres, but without him in the lineup for the season's last week, they were caught and passed by the Colorado Rockies in the National League Wild Card race. In 2008, he signed a $5 million deal with the Texas Rangers. He played extremely well over the season's first half, making the All-Star team for the first time. He led the American League in OPS and on-base percentage and established career-best totals for runs scored, home runs and RBI. His final line was an outstanding .321/.436/.563 in 126 games, with 22 homers and 77 RBI.

Bradley became a free agent after the season and cashed in on his excellent year with a three-year, $30 million contract with the Chicago Cubs, who were looking for a left-handed bat to balance their lineup. However, the 2009 season was not a happy one for Bradley, who was bothered by a string of nagging injuries, missed significant playing time, and saw all of his hitting statistics regress significantly. In a characteristic move, he was ejected from his first game at Wrigley Field on April 16 after arguing a third strike call from umpire Larry Vanover, and earned a one-game suspension as a result of his outburst. For their part, the Cubs went into a free fall after hanging on in the NL Central race into early August. On September 19, Bradley gave an interview to an Arlington Heights newspaper in which he criticized team management, blaming them for the team's 100-year run of futility and hinting that the fans had no idea what a winning team or ballplayer would look like. The interview came after Bradley had taken himself out of a game the day before because of a knee problem, then had his name scratched from the day's lineup for similar reasons. One day later, general manager Jim Hendry announced that Bradley was suspended for the remainder of the season, as his statements were detrimental to the team and showed lack of respect for its fans. At that point, he was hitting .257/.378/.397, with 11 homers, 61 runs scored and 40 RBI in 124 games, ironically making it the third busiest season in his career. On December 18, he was traded to the Seattle Mariners in return for underachieving starting pitcher Carlos Silva.

On May 5, 2010, Bradley asked the Mariners' front office for help with what manager Don Wakamatsu called "emotional stress" stemming from personal issues. The Mariners stated he would be out of action for an indefinite period while dealing with this problem. The announcement came two days after a public tantrum when he struck out twice in a game, the second with the bases loaded; Wakamatsu had to remove him from the game in the 6th inning as a result. Bradley was hitting .214 with 2 homers and 12 RBI in 21 games at the time. Placed on the restricted list, he returned to action on May 19 and had two hits in a 3-2 loss to the Toronto Blue Jays. He told the Seattle Times on May 25 that he had been harboring suicidal thoughts and that these had compelled him to seek assistance. He continued to undergo counseling aimed at focusing on more positive feelings and not tying his entire identity to his on-field performance. He finished the season with a batting line of .205/.292/.348 in 73 games, with only 8 homers and 29 RBI, his season ending prematurely in July because of a knee injury.

On January 18, 2011, Bradley got into trouble once again, being arrested in Los Angeles on unspecified charges and being assigned a court appearance two weeks later. The Mariners front office commented that they were treating the situation "very seriously". It was later revealed that Bradley had made threatening comments to his wife, but after further investigation, the LAPD decided not to file criminal charges, although he was ordered to meet a judge with his wife. As a result, he managed to make it to spring training in time, where he was reunited with manager Eric Wedge, a nemesis earlier in his career. He also faced the need to fight for a job with youngster Michael Saunders and veterans Gabe Gross and Jody Gerut. Still, he managed to retain his starting job at the start of the season, but started cold, batting only .200 in 24 games in April. On April 30, in a game against the Boston Red Sox, he was involved in yet another controversy. After hitting a double that broke an 0 for 22 slump, he started yelling at first base umpire Todd Tichenor about a close play on which teammate Miguel Olivo was called out at first. He was ejected by second base umpire Gerry Davis as it was alleged that he had bumped him during the argument; he was later suspended one game and fined an undisclosed amount by MLB head of on-field discipline Joe Garagiola, Jr. On May 9th, the Mariners decided they had had enough and designated him for assignment. "He's not part of our future and not part of our present," explained GM Jack Zduriencik. He was hitting .218 with 2 homers and 13 RBI in 101 at-bats at the time.

He got into more personal trouble on September 28th of that year when he was arrested in the San Fernando Valley on charges of felony battery towards his wife, Monique, and was ordered to appear in court on October 18th. After a few other incidents, he was charged on January 11, 2013, with 13 misdemeanor counts of assault with a deadly weapon, vandalism and dissuading a witness from making a report. He faced up to 13 years in jail and $13,000 in fines as a result. The charges referred to at least five incidents over the previous two years, two of them resulting in police arresting him at his home. Bradley denied all charges, claiming through his attorney that "his wife was making up stories". There was no avoiding punishment this time, however, given his long list of previous offenses. On July 2nd, after he had been found guilty of nine misdemeanor counts, a judge sentenced him to 2 1/2 years in jail, 400 hours of community service and five years of probation; he was also ordered to undergo counseling on domestic violence and follow anger management courses. Bradley indicated he planned to appeal the sentence but ended up serving 32 months until being released on probation in 2016. In early 2018, while still on parole, he was charged with spousal battery after an altercation with his new wife, Rachel, at their home in Encino, CA that January. He pled no contest to domestic battery in June and was sentenced to 3 years probation as well as 1 year of domestic violence counseling.